Just two days before the new year I received a pleasant surprise in the form of a Skechers GOrun Ride 5 (GRR5). I wasn't really expecting to end 2015 with a new shoe to try out but I wasn't complaining. Aside from the Skechers GOrun Ultra Road, it has been a while since I've gotten my hands or rather feet on a new Skechers model. 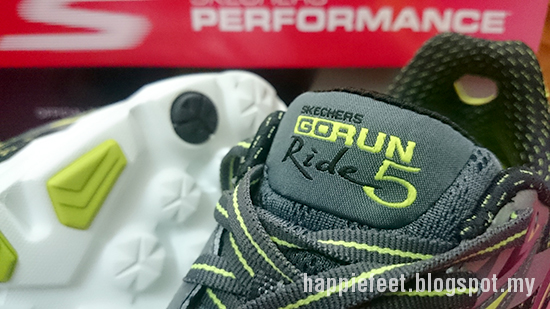 I've always been a fan of most of the Skechers Performance series of shoes right back from the Skechers GObionic to the GOspeed and my all time favourite Skechers shoe, the GOrun 4 that gave me my marathon personal best. While I thought the GOrun Ride series were a decent pair of running shoes, they weren't really my favourite of the lot.

That has now changed with the Skechers GOrun Ride 5, the latest iteration of the GRR series. The GRR5 is a day to day neutral trainer that weighs in at a decent 8.4oz for the men's size 9. The first thing that caught my attention with the GRR5 was that it looked a little bulkier than its predecessor and resembled the GOrun Strada visually. 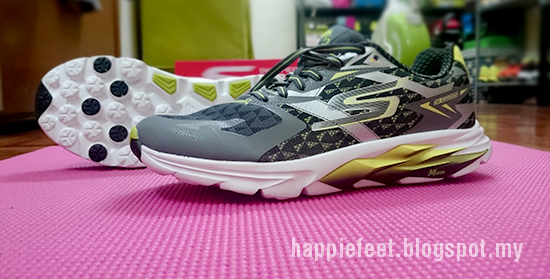 The Skechers GOrun Ride 5 is a totally new update of the GRR4 with a completely new upper and outsole. The first thing that you'd notice about the GRR5's new upper the moment you slip them on is that they fit a lot narrower than the GRR4 but that's not a bad thing.

The upper is constructed with a breathable diamond synthetic mesh that provides lateral and medial stability support for the feet. A virtually seamless 3D printed synthetic overlay sits atop the upper mesh keeping the overlays as minimal as possible with an oblique last for additional toe splay area and a secure fit. A removeable insole is added for a custom fit. The laces are of the flat "ribbon" type. 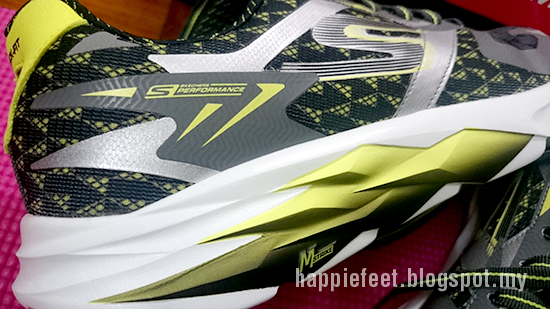 Now, remember I said the GRR5 had a much narrower fit (it fit more like the GOrun 4), well it didn't really pose too much problems cos the mesh had more than enough give to accommodate wider feet and comfortable toe splaying. In fact I really like the fit of the GRR5 compared to the GRR4. That was a big plus for me.

The one thing that I didn't really like about the GRR5 was that the "Quick Fit Portal" (QFP) was still apparent on the shoe. The QFP is a somewhat triangular hole on the back of the shoe that makes the shoe easier to pull on. Aside from maybe giving it a little less weight, it doesn't do much for me and is more of an annoyance cos I find small stones being, for want of a better word, sucked in and we all know trying to run with pebbles or debris inside your shoe can be damn irritating. To be fair, the roads where I run is not the cleanest, debris wise, so maybe on a much cleaner road or pavement, this wouldn't be an issue. 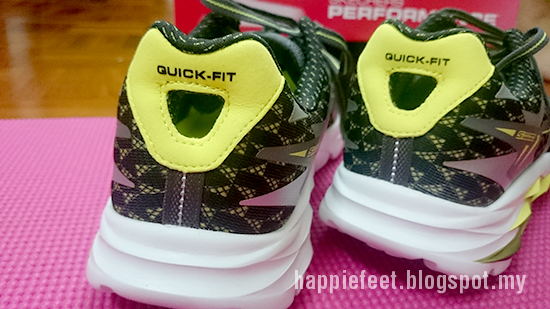 The midsole is made up of the same flexible proprietary Resaltyte® injection molded compound for impact protection and response but with an increase to the Resalyte® compound this time around which makes the outsole look a lot bulkier than its predecessor. The increased Resaltyte® strangely enough gave the GRR5 a much firmer feel than the GRR4 with a much faster response time. Another plus for me cos I lean towards the much more firmer shoes spectrum. In fact, I would closely say that the GRR5 feels and looks more like the muscle bound cousin of the GOrun 4 than an update for the GOrun Ride series.

This begs an interesting question of how the next GOrun 5 update will look like since the GRR5 already bears a startlingly similar characteristics to the GR4. Guess only time will tell and I'll just have to patiently wait for the release of the GR5, if at all there is going to be one.

The outsole of the GRR5 has also seen some changes. It now looks a lot more closer to the outsole of the GR4. The GOimpulse® Sensors are now re-positioned along the outsole. I thought the re-positioning of the harder rubber lugs especially around the ball of the foot was a good move as this section of the outsole wears out a lot faster and the added protection does help considerably. In all honesty, the outsole of all Skechers shoes really aren't all that durable to begin with. 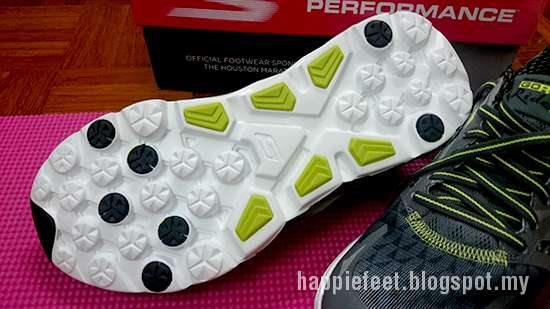 The Skechers GOrun Ride 5 is a 4mm drop shoe (6mm with the insole) and has a stack height of 16mm in the forefoot and 20mm in the heel (this specifications were taken off Running Warehouse). The GRR5 also features the same M-Strike Technology promoting mid-foot string as you run though I still scrape the heel every now and then, especially when I get tired.

I've so far run about 80 plus kilometers in them and I'm just loving them more with each mile I take. The GRR5 is a much firmer ride than its older sibling and is very much more responsive as well. I've done runs in the ranges of 10km and half marathon distances in them and they stepped up each and every time. They're able to handle pace changes effortlessly and has just enough cushioning (though not as cushy as the GOrun Strada) that it feels right at home for a short fast run or for those longer slow runs. 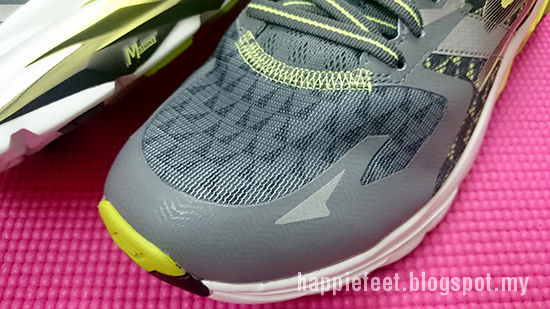 Ultimately, liking a shoe depends on the individual but if you need a little more shoe than the GOrun series, this would be it. A smooth, firm ride with a fast response yet easy and comfortable enough to go the miles. That said, there are two more things that could be improved with the GRR5 namely I'd have prefer to see more reflective details around the shoe and some much more groovy and loud colorways. Of late, the colorway of the Skechers Performance series seems a little on the mellow side.


The Skechers GOrun Ride 5 retails at RM439 for the men's and RM399 for the women's and based on my last conversation with Skechers Malaysia, the GGR5 was supposed to be out in stores last week but I've yet to see any in the stores just yet. I'll update the release dates once I get more information.