It's been more than 2 years since I've put on a Skechers running shoe. It's not because I don't like the brand but on the contrary. I love the brand but due to contractual agreements, Skechers and just about every other brand was off limits to me.

But now that I'm able to, I've been putting some miles into the Skechers GOrun 5, the 5th iteration of the GOrun series. I've ran in their first ever performance model, the original GOrun and came to love the GOrun series since then. In fact, the 4th iteration (2015 edition) of the shoe gave me my marathon sub-4 PR and it has never disappointed.

Sadly, the past 2 year have seen a decline of Skechers performance series shoes in this part of the world. While there are many Skechers outlets around, the number of people in a Skechers performance series running shoes has been declining slowly but steadily. It's sad really cos the brand still has lots of potential. It could be in part that Skechers over in the Asian region seems to be going the lifestyle path. 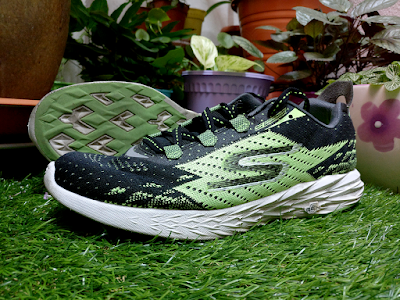 Back then the brand was slowly but surely making its presence felt over here in the running industry with a lot more people taking to the roads in them. From hardly being able to see a single Skechers Performance series to seeing them just about everywhere during a race event spoke volumes on how good the shoes were (it still is, mind you!).

But these days you'd be hard pressed to spot the latest Skechers Performance series shoes and many good Performance models don't even see the light of day over here. I haven't even seen the Skechers GOmeb Speed 4 till today but I've already read reviews by wear testers for the GOmeb Speed 5 (and what a review it is). There really is a lot of good Skechers Performance series models out there but sadly the only way I'll get to try them is to probably purchase them online.

Anyways, back to the GOrun 5 (GR5). The pair that I've been using actually belongs to my wife (she gets a better fit with the men's version). She's been a fan of Skechers as long as I have and she gets the credit for getting me to try on a Skechers shoe in the first place all those years ago! She decided to pass me the GR5 simply because she thought I'd be able to put the shoe through the paces better than she could, she's such a gem that way, and I wasn't going to look a gift horse in the mouth! 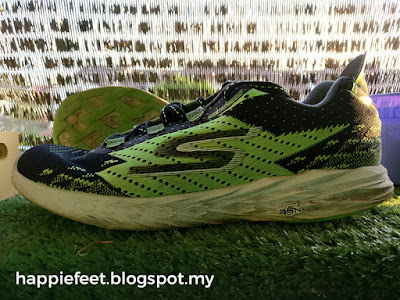 My last experience with a Skechers was with the Skechers GOrun 4 (review here) and there were actually two versions with the second version utilizing the new GOknit™ upper, something that I haven't had the chance to try since back then the knitted version wasn't available here. The only other shoe that I had experienced something close to the GOknit™ upper was the Skechers GOrun Bolt (review here) with its woven FitKnit upper and I personally loved that shoe.

Now, the GR5 employs a non-stretch knit upper called the GOknit™ that keeps the fit and feel of the shoe the same even after running in them for a few weeks. They fit the same as the first day of use and you'll not find any hidden component or surprises in them. I dislike shoes with too much overlays and thick synthetic uppers but the GOknit™ upper of the GR5 is something I truly love. In fact the Skechers Performance series shoes has been seeing the GOknit™ used on a lot of models, for instance the GOmeb Razor and the GOmeb Speed 4.

As I mentioned above, I love the upper of the GR5 which is fully seamless and was practically a picture of comfort! The GOknit™ was so breathable that on a more windy morning run, I could actually feel the breeze flowing through them. The drawback to this was the shoe wasn't at all waterproof in any sense. On days when I ran in the rain, my socks were soaked within minutes even in slight drizzles. I guess you can't win them all and I don't always run in the rain anyway.

The tongue and lacing system has seen a redesign of sorts with the tongue on the GR5 now being padded unlike the more raw version of its predecessor, the GR4. I had no issues with the change and in fact found them to be an improvement as it stayed in place without any slipping during all my runs. 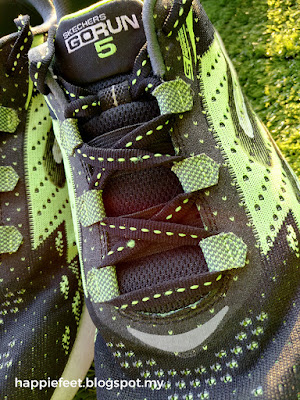 The GR5 uses the same flat laces as the GR4 but the lacing now passes through fabric loops instead of eyelets and cuts down on the number of rows from seven to five. This in turns leads to a lot more space between the rows and is bridged by adding two elastic bands which only spans over the tongue and not around the entire midfoot though I found it didn't do anything for me.

Aside from that, the usual detailing like the fused Skechers logos and reflective elements are carried over from its older sibling. The Quickfit pull tab, something that was actually part of the back heel in the previous version is now located separately on the top of the heel as a synthetic pull tab. I didn't like the Quickfit pull tab on the GR4 and I still don't like it on the GR5. I see no useful reason for it really. 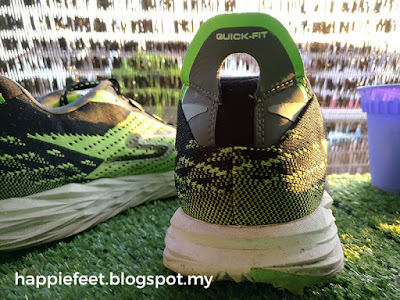 The heel holds pretty firm and there really isn't much changes in the heel mesh and padding. A hard internal counter is added to shape the heel and the collar walls are sparsely padded like before. The GR5 fits true to size and my pair fit like a charm.

While the Skechers GOrun 5 still states 'M-Strike' under the midfoot, the midsole has now been transformed into a more flat design. With the ditching of the rocker-shaped design, the GR4's Resalyte EVA foam has also been changed to the new 5Gen® EVA foam variant instead. The entire midsole is now a single density foam unlike the separate foam component of the GR4.

The compression molded 5Gen® midsole gives the GR5 a more cushioned and responsive feel. The cushioning is actually pretty remarkable seeing as how the GR5 no longer uses the pillar cushioning of its past GOrun models but now features a much flatter profile. 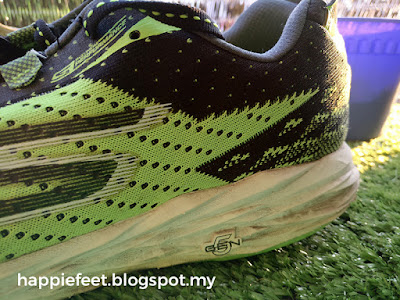 I had mixed reactions about the cushioning when I first slipped them on. They felt really soft and I was afraid they wouldn't be as responsive. I'm so used to running in much firmer shoes that the GR5 felt like I was walking with cotton on my feet. But that fear was quickly put to rest the moment I started running in them. The GR5's cushioning, while feeling a little pillow like but not to the point of sinking into them has just the right amount of firmness and bounce which propels your feet nicely as you toe off.

The Skechers GOrun 5 has shed a little weight from its previous iteration, now weighing 7.5oz for a men's size 9. The GR5 has a stack height of 18mm in the heel and 14mm in the forefoot giving it a drop of 4mm which is something I really like in a shoe.

Skechers Performance has decided to drop the original GOimpulse pillars found on the previous generations of the GOrun series and have gone with a more developed outsole without sacrificing the weight or flexibility of the shoe. The entire outsole has been redesigned and there's a lot more rubber used now. The forefoot and rear are now covered with a thin sheet of rubber save for a small area under the midfoot.

The amount of rubber on the outsole this time around is a lot more generous than the previous iterations of the shoe and the exposed windows cut into the outsole provides a more cohesive cushioning behavior with a much wider opportunity for durability, regardless of how you land, well almost anyway. The outsole lacks any aggressive lugs and while the GR5 grips just great on dry surfaces, you'd have to watch out a little when running in wet conditions. 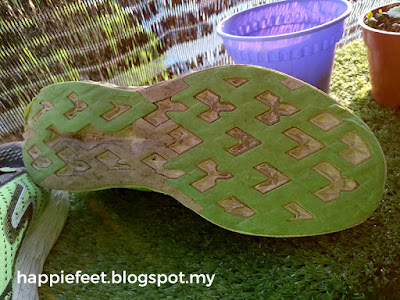 I've put in more than 80k (not including my wife's mileage in them) with the Skechers GOrun 5 and I've loved every moment of it. Right from the first time I slipped my feet into them, I couldn't find anything wrong with them. I've put them through various paces, from easy runs to tempo and track work, various distances, from 5k runs to 20k runs and they were a breeze to run in. I've always loved the GOrun series right from the very first model and the 5th iteration of the shoe doesn't disappoint one bit!

The Skechers GOrun 5 is a much softer shoe than the GOrun 4 and the new 5Gen® foam has made a huge difference in ride experience. The design features on the side wall of the midsole which has sharp grooves making the midsole easier to compress as you run has also contributed in the feel good experience of the GOrun 5.

Like I said earlier, the cushioning of the GR5 is simply just right. It's not too soft and the softness tapers from heel to forefoot nicely with the rear feeling more cushioned compared to the forefoot where a thinner midsole gives it the firmness it needs. For what it's worth, the Skechers GOrun 5 is a versatile shoe that can be utilized for a variety of runs, be it a 10k or a marathon. Being a minimal 4mm drop shoe, you'd need to be a little careful if you're coming from a much higher drop shoes as you could feel some initial soreness in your legs. 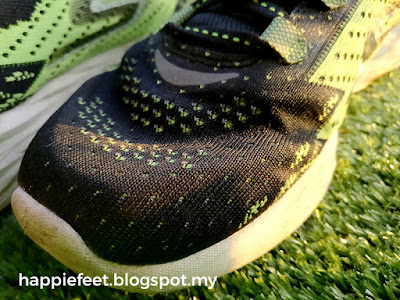 If you're looking for a trainer/racer, I'd say the Skechers GOrun 5 delivers just that. It's a shoe you can go fast in or simply just cruise around in them. If you've never tried a Skechers Performance series before, I'd say it's about time you tried one. You won't be disappointed!