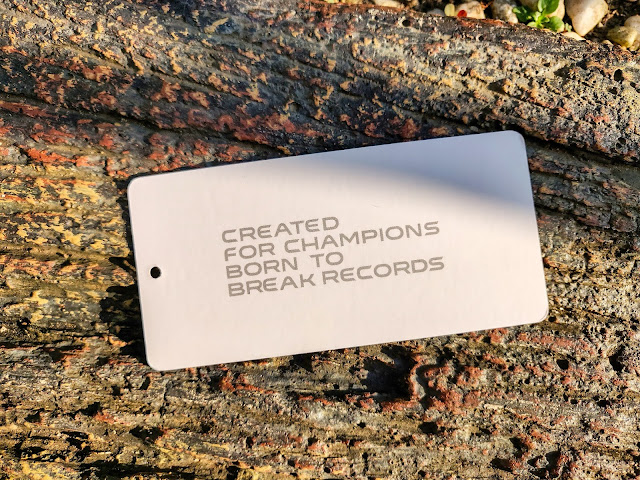 Being a running shoe geek who follows lots of shoe geek pages on social media, it's only natural that I would be seeing lots of shoe talk go through that page. From the more popular brand names to the smaller less conspicuous ones. Some intrigue me, some don't. That said, I do have my favourite brands that I prefer and the Xtep brand of running shoe line wasn't really one of them, to be absolutely honest. Yes, I've heard of them, I wouldn't be a shoe geek if I didn't keep track of all shoe brands out there now would I? 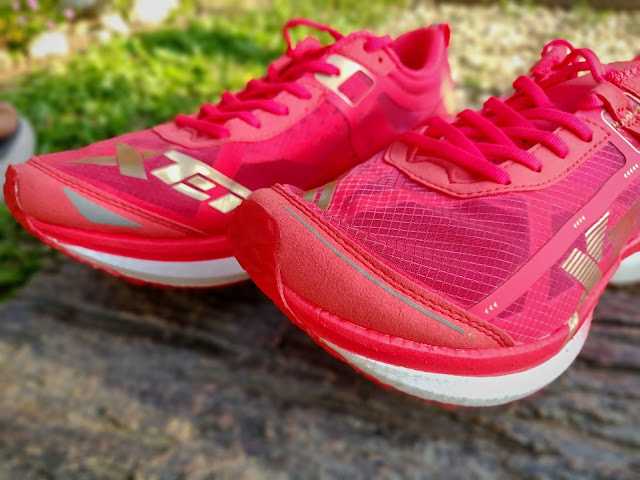 But I was given the opportunity to try out the 160X by Xtep Malaysia and I said why not. Let's see if I really couldn't handle carbon plated shoes or if this was any different. Please do note, my experience with carbon plated shoes are miniscule. The shoe arrived within 10 days or so and I was a little excited to give it a spin.

Upon taking it out of the box, the first thing that caught my attention was how light weight it was. I'm a sucker for really light weight shoes and I was intrigued even more! The Xtep 160X, a narrow bifurcated curved carbon plated racer with a Pebax based midsole and a surprisingly thin yet stretchy monolayer upper is basically their flagship shoe. From what I gathered online, the 160X basically holds the second fastest Chinese marathon record in Dong Guojian at 2:08:28. Impressive, if you ask me, especially when even in my dreams (or nightmares) I won't be able to achieve anything remotely near those kinds of pace, well maybe for a whole 200 metres or so ... hahaha! 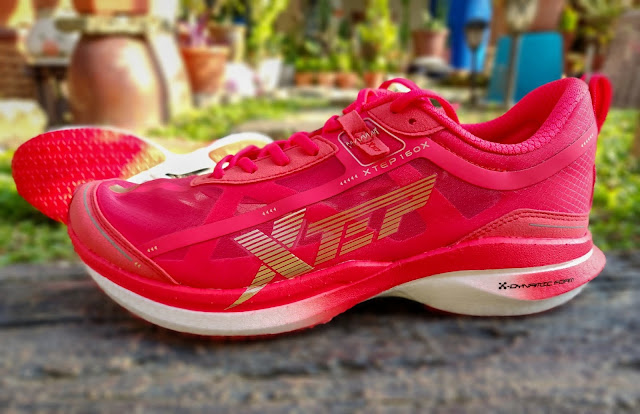 The colour I got was the Red colourway and it was pretty flashy with the gold logos all around, not really a problem since I like flashy shoes. As I said, the 160X is a light weight marathon racer and the US9, which is what I wear weighed only 6.9oz! The fit for me was true to size though I read that many had sizing issues and suggested sizing up a little. I couldn't find much data on the stack height and pulled this off Doctors of Running - the forefoot comes in at 28mm with a heel drop of 31mm thus making this a 3mm drop shoe.

The monolayer upper is made up of a really, and I mean really thin yet stretchy material. It was so thin that breathability was absolutely no issue. You could feel the cool air flowing through the shoes and I really, really like that. In fact the thin upper produced an accidental effect of turning the red upper to slightly different shades depending on the colour of your socks as I found out when I happened to see a pink tinge from the white socks I was wearing :). But seriously, I loved how breathable the upper was. I thought my Puma Liberate has a thin upper, this one was even thinner! 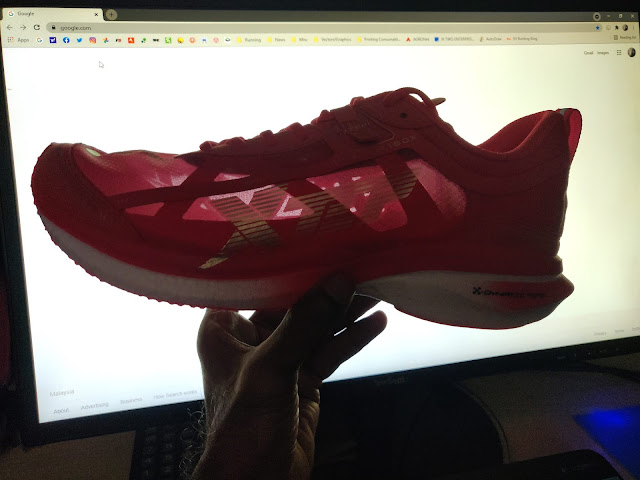 The midsole is made up of proprietary Pebax called X-Dynamic Foam that feels similar to PEBA foam and feels bouncy yet firm and stable. The foam bounces you nicely along at faster paces as I discovered and had a nice spring to it. That said, the midfoot is pretty narrow (thankfully I have narrow feet) and doesn't give you total ground contact. The full length carbon plate (named Adaptive Carbon Fibre Propulsion System-Stabel Rebound, a mouthful, I know) from what little experience I have in them feels rigid but creates a nice lively and poppy ride. You can see the carbon fibre under the foot bed through the outsole of the shoe. I was surprised as I actually like the feel of the snappiness of the carbon plate which is due to the midsole cushioning dampening the harshness of the carbon plate.

The forefoot has a surprising amount of flexibility making the 160X just as good for those easy runs or even if you wanna take it up a notch or two. With the generous cushioning underfoot, the Xtep 160X is pretty versatile as a lightweight trainer, workout shoe or a long distance racer. The heel is highly cushioned, rigid through the midfoot and flexes a little more up front and really works as an excellent performance trainer. 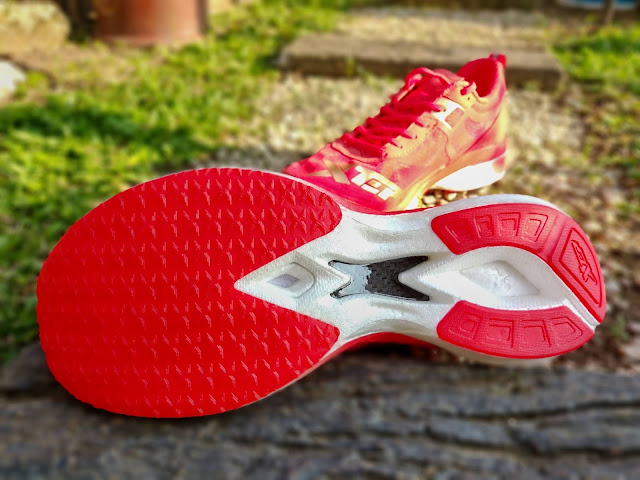 The outsole here deserves some kudos. Xtep has done a great job with it. The outsole is thin but durable and the thinness of the rubber actually makes it very pliable. There is sufficient rubber covering the entirety of outsole and I'm guessing the durability is going to be fantastic based on the wear or hardly any wear for the duration I've been using the shoe. The grip on wet and slippery roads are excellent and I can attest to this as I've run them in wet weather conditions.

What do I think of them? I've put 50km on them to date and for one who was not too keen on carbon plated shoes before, I'm genuinely liking them. The Xtep 160X was built as a distance racer. I've run them both at slower and faster paces and it works just as well for both. When I needed to speed up from a slow to a faster pace, they took on the challenge easily. My easy runs have felt great with them and my faster paced runs felt so effortless to build up to. There is enough cushioning to use the Xtep 160X as a lightweight trainer and with the carbon plate in there to help things along, converting this to a marathon trainer is just as easy. 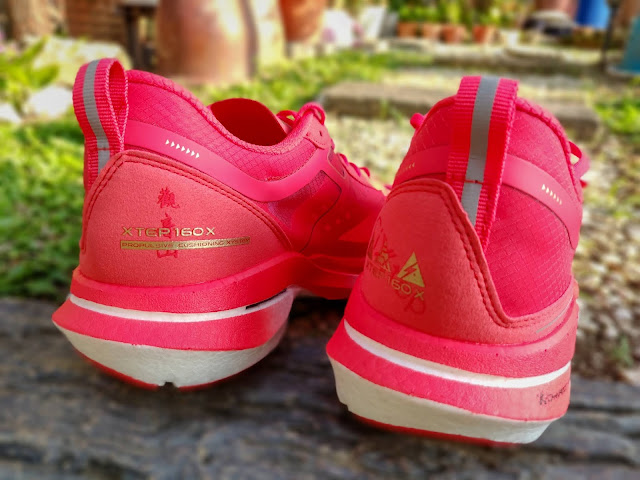 I've not run long in them, the max was a 10km but I've used them for various paces and they worked equally well for slow (7:20 pace) or faster (4:46 pace) paces. My only annoyance was how loud they were. I'm a very light footed runner and even then, I still felt like I was hammering on bongo drums as I ran by. It doesn't help that I run so early in the morning when the roads are so quiet. A little tip here, thin socks don't work with the shoe cos my foot tended to slide in them too much but changing to a thicker socks solved that issue, so that's something to take note of.

Would I recommend the Xtep 160X v1? Yes, I most definitely would. Being a lot more affordable than the bigger name carbon plated shoes out there, this would be a great starting point to find out if carbon plated shoes work for you. The version I tested was the first version, they've now released the Version 2 which I've yet to try and from what I've read, it's quite an improvement. That said, I'm also looking forward to the 300X slated for release next year. It's a mighty fine looking shoe. 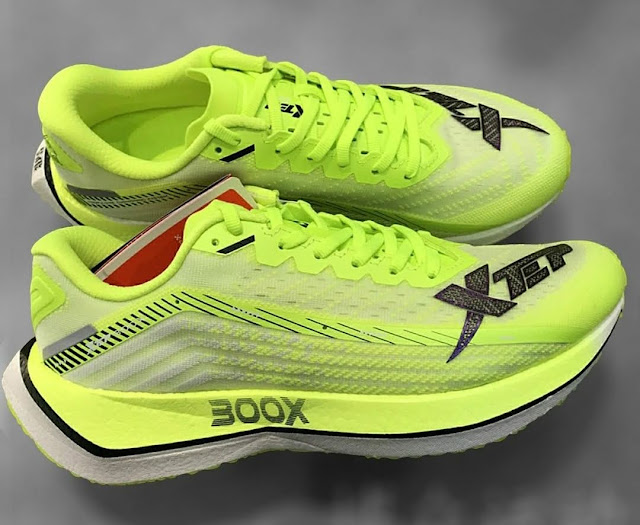 If you are interested in purchasing a pair, use discount code NP15 for a 15% discount for your purchases and if you've a group of 6 people interested to purchase as a group order, Xtep Malaysia will work out a further special additional discount. Just leave me a message if you'd like to know more.

The pair of Xtep 160X v1 in this review was kindly provided Xtep Malaysia and this review is my own personal opinion and experience and is no way influenced by Xtep in any way. For more details on Xtep shoes and it's various other running products, click here. 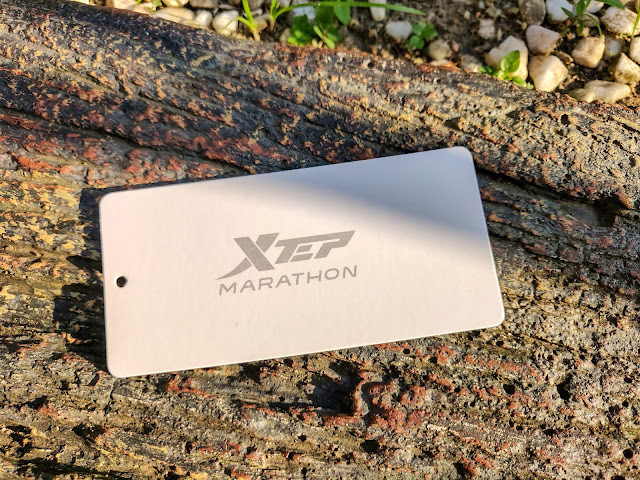