Hoka One One Tracer 2 Review

The first time I ever saw a Hoka was on this woman during a race all those years ago and this was my exact words, "Why the heck is she using a brick to run?", cos that's exactly the impression a Hoka gave me back then. I shook my head in bewilderment and moved on.

Fast forward to the present. I finally found myself getting interested in putting on a pair of Hoka's. Over the years, they've improved their tech so much and the fact that a few of my running buddies have been raving about it set my curiosity abuzz. 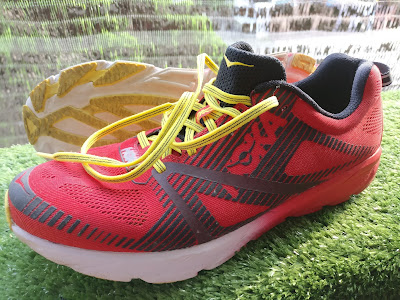 The model that caught my eye was the Hoka One One Tracer 2. The fact that it was touted as the lightest of road shoes in the Hoka line made my eyes open even wider. And also the fact that it falls into the racing flats category was what sealed the deal. Almost all my friends know that I absolutely love the more lighter and faster shoe categories.

Next came the quest to get one. With the model not being available here at the time I was looking for it and even if it was, the local Hoka One One pricing can put a huge dent into your wallet. With a recommendation from a friend, I looked it up online and managed to snag one from Spain, yes Spain no less and instantly purchased it. The price I got it for, at RM458.00 was so much easier on the wallet, included shipping it all the way from Spain. 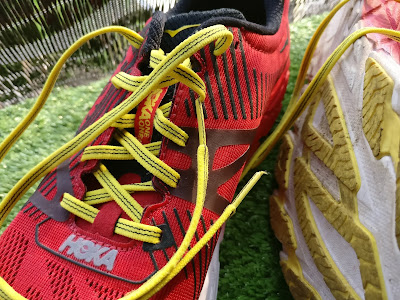 My pair arrived within 10 days time which included the local customs clearance that took a little longer than I anticipated. The Tracer 2 that I purchased came in the True Red/Black colorway, not the color I was looking for but heck I was so desperate to try the shoe that I'd have even taken one in Pink if  they had it. Having no experience with a Hoka before, I wasn't really sure if they were true to size. After checking with Jamie, our local shoe expert (one capati for the plug please!), I decided on a half size bigger than my usual US9.

Upon slipping it after picking it up from the post office, the half size up was a little big for me but nothing a thicker pair of socks won't solve. On hindsight a US9 would have been a perfect fit but at least now I have a size benchmark for my future Hoka orders. 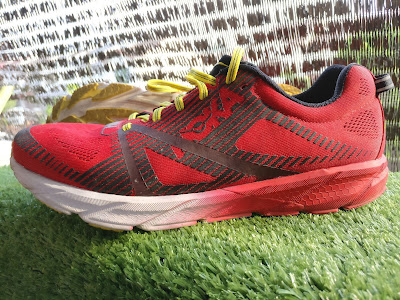 The Tracer 2 sports a light engineered upper mesh that has a nice snug fit throughout the midfoot, toe and heel giving it a sock like fit. My foot feels entirely secure in the engineered mesh and the lightly padded tongue and heel counter gives the shoe an absolutely perfect fit. The engineered upper mesh also allows adequate ventilation for your foot to breathe. I hardly felt any heat while on the run and we know how humid and hot this country can get at times. 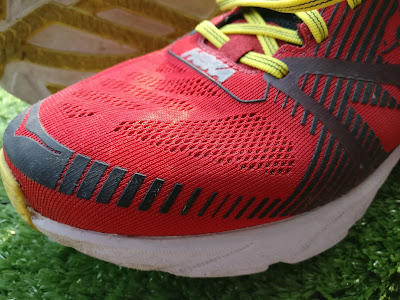 A 3D puff print, not really sure what that is, creates some structure that produces a lightweight yet supportive foot wrap which in turn keeps your feet locked in places regardless of how fast you run. I've taken the Tracer 2 out for both slower and faster runs on various types of surfaces such as asphalt, concrete and even on track and even with a half size too big, my feet were held snugly in place throughout.

The midsole of the Hoka Tracer 2 hasn't changed from its older sibling and is still the same PRO2Lite dual density midsole giving the heel a softer feet with a more responsive and firmer forefoot. The shape of the the midsole tends to give the Tracer 2 a rocker like feel. The PRO2lite midsole boils down to a unique balance of PROpulsion and PROtection providing confidence and support as you propel forward, either speeding along a road, track or ascending hills. 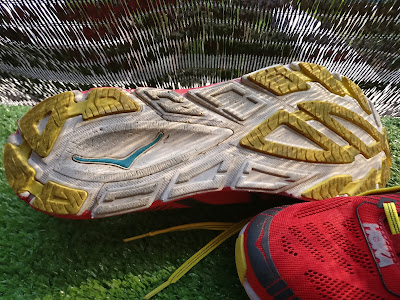 The outsole comprises of hard rubber that's distributed around the high wear areas for durability that's layered over an RMAT foam which encompasses a high energy return yet providing just the right amount of additional cushioning. The traction provided is simply solid for most surfaces I've taken them on, even on some very basic dirt paths.

An Ortholite sockliner, with anti-bacterial materials sit atop a thin foam footbed with an interior that is well constructed and looks soft enough to run sockless in though I'm not sure if they would give any issues or not cos I'm definitely not a sockless type of runner. 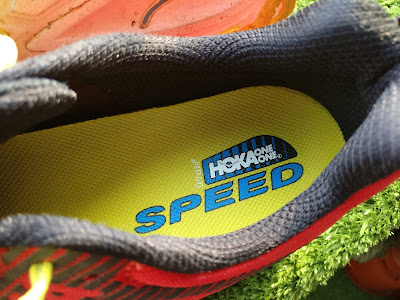 I've put a little over 90 plus kilometers in them since they first arrived and I have to say that they've worked like a charm for me. Being a Hoka newbie, I'm absolutely impressed with the tech that combines a lightweight racer with plenty of cushioning! The only complaint I would have is that the laces are a way too long.

I've put the Tracer 2 through various sessions such as speed workouts, tempos, trackwork and a maximum distance of 15k and I'm very impressed at its versatility. With my extreme fondness for racing flats, I'm pretty sure I'll be able to take on a marathon with them. My first experience with a Hoka has only elevated my curiosity about the other options that Hoka has to offer. The Hoka One One Tracer 2 is not only fast but its firm and responsive and if you're looking for a shoe that is both light yet cushioned, the Tracer 2 would be right up your alley. 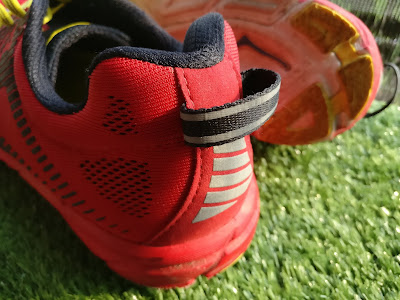 As of this post I'm not sure if the local distributors of the Hoka brand over here has released the shoe yet though. I really don't bother checking the Hoka's on offer here simply because it's priced so exorbitantly over here that it drives me to look elsewhere online that pretty much offers a lot cheaper pricing that I'm willing to part my money with and it was worth every single Ringgit!

Sun Life Malaysia recently concluded their SHiNE Resolution Run over the weekend which attracted over 3000 runners this year. The run was conceptualised to help promote and jumpstart the New Year's resolution.

Additionally, 10% of the proceeds will go to Sun Life Malaysia's charity partners, HOPE Worldwide Malaysia and Diabetes Malaysia. The event was held at Perdana Botanical Garden, Kuala Lumpur and was official flagged off at 6.45am by the Her Excellency, Julia Bentley, High Commissioner of Canada to Malaysia.