This post should rightly been titled 'The Nike 10K Annoying Teens Run'.

Before I even get into the gist of this post, let me start with the good things about it. The race was well organized as can be expected of something organized by Nike. The route was a nice and easy one that made running enjoyable. The hydration stations were well spaced out and very adequate. Traffic control was pretty good.

From the word go and after negotiating my way around hordes of runners, the run became a pleasant stroll through the city. Most of you season runners probably know this route pretty well seeing as how it's the usual route for most runs starting around the Dataran Merdeka/Padang Merbuk area so I'm not going to elaborate much on the run.

My whole race plan was to just go out and enjoy the run which I did by keeping an even and steady pace with more emphasis on monitoring my heart rate rather than pace, which in turn lead to a pleasant run. Crossed the finish in a time of 53:20 which was decent timing and felt like I could have run another 10 kilometers more.

Once again, a big congrats to the wife for shaving 6 minutes of her personal best 10K time. I tell you, that woman is awesome! I'm mighty proud of her as always. She's now eager to shave off more time in next week's 'home ground' run, the MPSJ 10K and I believe she can do it.

The race memento was this shoe shaped USB device which is slightly more useful than last year's toy ... LOL! A medal would have been preferable but no complains from me. It's not the medal or memento that draws me to races anyway. Kudo's go out to the Nike organizing team. 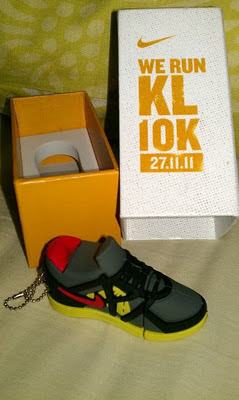 Now comes the fun part. Before I head into it, I advise a whole lot of you out there to PLEASE go and read Jamie's race etiquette posting. It will come in handy in your future races if you intend to continue in this sport of running.

This run organized by Nike was geared towards the younger generation, the teens. I mean, Nike is more synonymous with teens than any other running brand. If you're a teen and you don't fall into this annoying teen category, my humblest apologies but a lot of you (teens) are just plain rude, selfish and don't practice common sense.

While we're all excited about running the race, please for gods sake not push your way to the stating line by barging through without a word of apology. Why didn't you just get to the front instead of doing it at the last minute and irritating the rest of us who patiently made our way to the front. You tread on peoples shoes, shove us in the sides just to get in front and do what? Let's face it, if you're going to win the race, then by all means, squeeze your way through, if not, please line up according to your ability (race etiquette number one in Jamie's post).

I'm not even going to talk about the screaming and giggling and horrendous noise some of you were dishing out. I'll put that down to the excitement of the moment but god, it was so darned annoying. You should really hear yourselves.

Then we come to the part about not making the entire length of the road your own by lining up in one straight line, walking, talking and giggling all the way. There are some of us who are running and trying to negotiate around you by having to move slightly outside the cones could get us knocked down by cars whizzing by. It's not a closed race, mind you and the cordoned off area is not that wide.

Race etiquette number 2 in Jamie's post - Stopping suddenly, don't! Yes, please don't. You could get someone in serious trouble when you stop suddenly to tie your laces or whatnots by having them crash into you which is what happened to me.

There I was nicely concentrating on my run, when this young girl decides that she'd just like to stop right there and then in the middle of my path (and on a downhill stretch at that) to tie her laces which had me crashing into her. Luckily I managed to keep on my feet and not stumble and hurt myself on that hard tarred road or something.

I'm really sorry that I uttered those expletives at you and humbly apologize but you seriously deserved every single word I uttered to you back then. Please, in future, move to the side if you need to tie your laces, drink or whatever. Remember, there are people who are running behind you. I'm not going to even touch about the spitting, hacking and throwing of your drink cups. All I can say is please look before you do any of those.

This last bitch is on behalf of the wife. There she was, in a long queue at the end of the race to get her memento when this teen comes up and asks the most obvious (and stupid) question - 'do I have to queue too?' No, we just enjoy standing in a long line after a hard run race! LOL!

Other than that, I seriously enjoyed myself thoroughly. After three back to back 21K's, this short 10K was a nice change of pace :D Maybe next year Nike could consider going longer, perhaps a 21K? Would be nice :D

We stayed back a bit after the run to watch Mizz Nina perform. It's not always you get to watch live performance for free :P 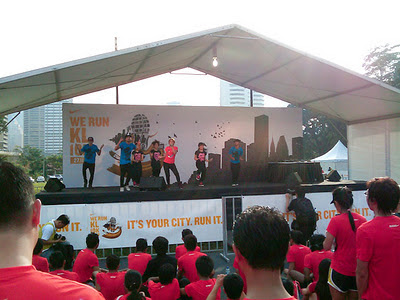