My last race for the year is over and done with. While it's only a 10K and nothing to shout about compared to you guys running the Standard Chartered Singapore Marathon, I'm still pretty happy with my run.

I've been looking forward to this race for personal reasons as well as the fact that it's just a stone's, well maybe three or four stone's away la, from my house. I ran this race by myself last year and am was glad to run it with the wife this year. Once again, that woman amazes me. She took off a whopping 4 minutes off from her Nike 10K time last week. She's getting faster with each race and I'm thoroughly overjoyed for her :D

Seeing as how the race was near our place, we woke up later than we do for other races, took a nice slow 10 minute jog from home to the start line to loosen and warm the muscles. By the time we reached the start line, the place was already filling up with people and we didn't have to wait long for race start.

The crowd was much lesser than last year, probably due to the many races that were being held elsewhere. The weather was pretty decent which was a good sign for me cos I intended to just kick into top gear the moment the gun went off, remembering Jamie's words of 'whacking' short distanced races like these.

Training and running this route on my run sessions was a huge advantage for me. I knew each and every pothole, every uneven road surface, where to speed up and where to slow, which I used to good advantage. The route was actually a darned easy one anyway.

The start was as usual with most races, swerving in and out to get pass the other runners. It took quite an effort to get past them during the first 1K and then things started spreading out a little more after that. I managed to get into an effective but fast paced stride. Nothing much to write about from this point onwards as the race was quite straight forward.

After a short battle at the end with two runners from my category, I managed to cross the line in a time of 50:40 minutes and was pleasantly surprised when an official stopped me and shoved a piece of token in my hand stating that I came in at position number 14 and was eligible for a limited finisher medal. I didn't expect it but was darned happy anyway :D 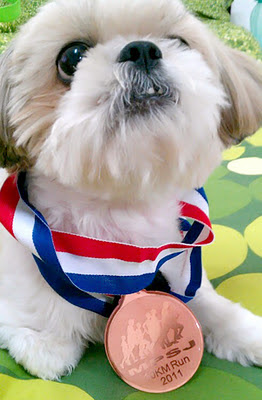 That brings the number of races I've done this year to a total number of 15. I thoroughly enjoyed each and every race and here's looking to next year's races :D

But I have one little complain (it just wouldn't be me if I didn't have at least one complain la ... LOL!). I wonder who the genius who came up with the idea of having the refreshment station right before the finish line by the side of the track. Imagine the amount of people crowding that refreshment station with the runners having to avoid them just to cross the finish line. Pure Genius!