The Skechers Nite Owl™ came into my possession a little too late to be showcased during the recently concluded Shape Men's Health Night Run 2013 nevertheless I was still excited to get it for wear testing from Skechers Malaysia about a week back. 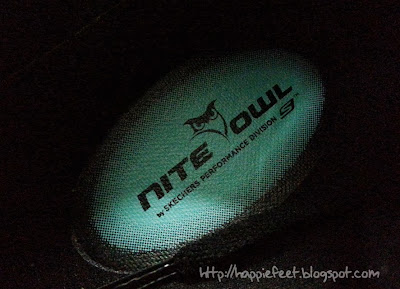 Work commitments only saw me being able to test the shoe during the morning hours which does not do justice to its Photoluminescent technology. Yes, for the uninitiated, the Skechers Nite Owl™ series of shoes are a glow in the dark running shoes that's ideal for night running or low light conditions. Short exposure to most light source will make the shoe glow in the dark albeit at different intensities depending on the light source. 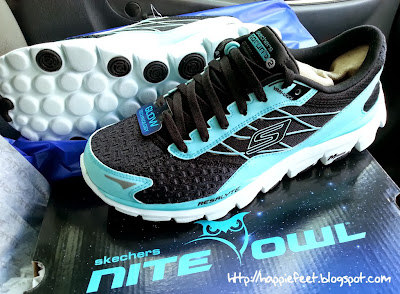 The Photoluminescent technology utilizes phosphorous to give it the glow you see in the dark. The technology is applied to specific sections on the upper of the Nite Owl™. These treated sections absorb whatever ambient light there is, though direct sunlight gives it the brightest glow, and releases it slowly. A short 15 minutes charge is enough to make it glow.

The Nite Owl™ shines the brightest for the first hour or so and will erode slowly over time with glow fading in intensity though there will always be some form of glow being emitted from the shoe as it's always absorbing whatever light is around.

Based on my own personal testing, a short hour of 'charge' under normal fluorescent lighting in the bedroom will keep the Nite Owl™ glowing all night till morning which was evident every time I woke up to go to the toilet. Coming back from my morning run after exposing the shoe to natural sunlight during an hour's worth of running saw the Nite Owl™ glowing like a nuclear reactor the moment I stepped into the house! It was that bright!

Now, putting the 'gimmicky' glow aside, let's get to the real performance of the shoe, which in my case is based on the GOrun Ride 2 (GRR2). So far, I've managed to clock close to 57km in them, most of them morning runs save for one run at night. I liked the first edition of the GOrun Ride, a nice, light, flexible, well cushioned yet minimal enough running shoe with simply one of the smoothest uppers I've felt. 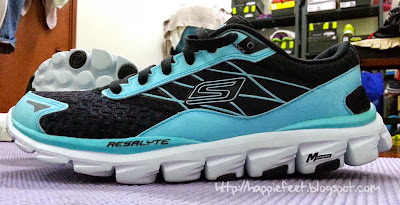 This second iteration of the shoe, weighing at 7.9 oz for the men's size 9, has an even smoother and more structured upper with a lot more overlays and a tighter mesh than its predecessor, giving your feet a much more secure cushy feel. The toebox is still wide enough for toe splaying and retains the breathable 4 way stretch mesh. 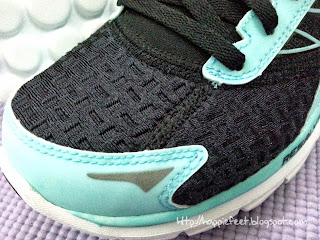 With all the overlays and tighter meshing, the GRR2 does run a little on the warmer side, especially if you're running long. I love the styling of the upper which retains the web like striping found on the GObionic Trail. The heel cup feel a little stiffer than the original but works nicely to keep your foot in place.

The outsole looks totally identical to the first edition of the shoe but upon some research I discovered that Skechers Performance removed 2mm from the mid section to decrease the arch bump which I hardly noticed. Though the GRR2 runs closer to the ground than the original giving a much improved road feel, it's still cushy and plush enough to absorb impact which was evident during the relentless pounding of the recent Back 2 Endurance Ultra.

The propriety Resalyte® cushioning with memory retention sole responds really well to pace changes and is so much cushier this time around, at least that's how it felt to me. The 4mm drop keeps your foot nicely retained in a nearly neutral position. The outsole retains the same GOimpulse sensors and circular pods as the first edition and unfortunately also retains the same pebbles and debris issue getting stuck between the pods. Taking a page of the GOrun 2's outsole might address this issue nicely.

The Nite Owl™ comes with a removeable insole giving you the option to run with a more minimal feel or just keep it on for that added protection and support. The smooth fabric shoe lining makes it easy on the feet for sockless running though I haven't and don't intend to try it out as I'm not a sockless runner. I'll wait for the wife to try this option out when she gets her trial pair :D The lacing remains the same as its predecessor though I find it a little too short to use the loop lacing lock technique which I prefer.

The Skechers Nite Owl™ GOrun Ride 2 is definitely an improvement from the first edition. I'm a GObionic person. I love the feel of the ground and have run 2 marathons in the GObionic but in the four runs I've had with the Skechers Nite Owl™ GOrun Ride 2, the longest being 27km, I've come to take a very fond liking towards the shoe. They're lightweight, yet extremely cushioned and flexible and works well for those long slow distance runs over the weekends.

I found them to be easy on the feet during my runs and it felt like I was running on sponges. It does seem a lot more 'softer' than the original and work as a good recovery shoe for me after a tough run in the Skechers GObionic.

I highly recommend this shoe and not because of the glow aspect of the shoe. The performance of the shoe is simply first class for a shoe of its category. The Skechers Nite Owl™ GOrun Ride 2 is expected to be launched here in about 3 weeks or so and is priced at RM429 for the men's and RM399 for the women's. Do give it a look see when it's launched and you won't be disappointed.

I'm planning to use them for the coming Putrajaya Night Marathon, giving the shoe its deserved limelight and glow like never before. So if you see this person who looks like he has fireflies on his feet, wave ya ... LOL!

Nick Phillips (15/03/1967 - 04/11/2022)
Subang Jaya, Selangor
A running mad fanatic who is also shoe crazy. I created this blog to put words to my running journey and to write reviews for all the running shoes I've purchased or been given to review.