My first race for the year, the Shape Night Run almost didn't take shape (pun not intended) last night due to the sudden electrical storm that enveloped the race location an hour or so prior to race start. The race organizers had to make a really tough call but in the end the race was flagged off much to the approval of the participants, albeit 50 minutes past the actual race start time. Better late than never. 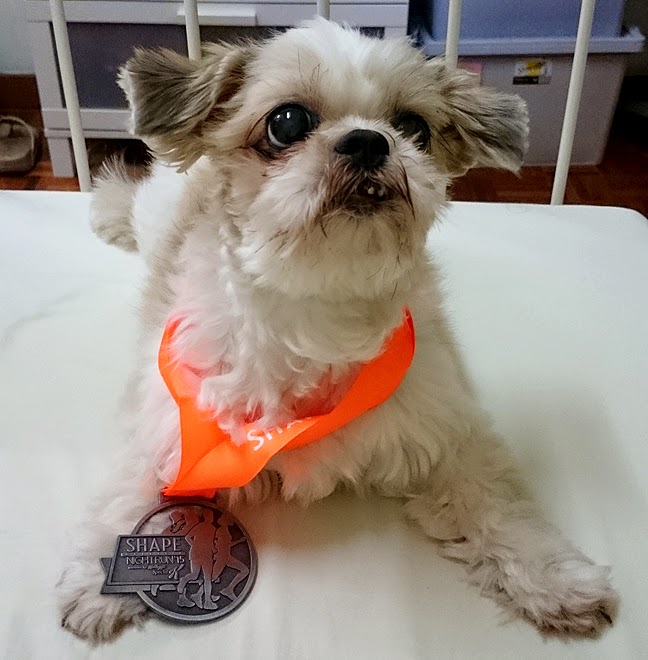 The Shape Night Run was making a comeback after a year's absence and I was looking forward to it, being my first race for the year. I had expected it to rain since we've been seeing rain almost every evening here but the electrical storm that accompanied it was a little frightening, especially when you're outdoors and exposed to its anger.

The wife and me headed to Putrajaya a little early as I had some stuff that needed to be attended to at the race site and also to meet up with Jamie and Choon Yuen. It was a hot evening when we arrived there. The four of us met up at the Skechers booth, mingled around, took some pictures and then Jamie, Choon Yuen and me headed out for a short 4k warm up while the wife said she'd just wait for us.


Halfway through the warm up run, on the way back, the lightning started. We looked ahead in the distance towards PICC and the entire place was dark and we could tell it was already raining. True enough, as we made our way back to the race start location, the rains came, lightning and all. I split up with Jamie and Choon Yuen who headed back to the car and went out to look for the wife but the rain was pretty bad that I took shelter under one of the tents. I was a little worried about the wife but knew she'd find shelter.

While waiting it out, I overheard the banter from the crew's walkie-talkies stating that the Start/Finish arch was swaying in the strong winds. Crap, I never experienced a situation like this and was concerned about the integrity of the arch. I rushed over in the pouring rain and lightning to check it out with the race director and both us concluded that it was secure enough and hopefully it would hold out. Nevertheless, we informed the client that there was no guarantee with weather like this.

By this time, everyone was anxious if the show would go on. I managed to find the wife in the Skechers tent and we waited for some news on the situation, Finally, 15 minutes before the actual race start time, someone came over and said that if by 8.30pm the rains and lightning didn't abate, the race would be shelved. It wasn't news I wanted to hear but it was a tough decision for the race director and the organizers.

The rain started to dwindle and it looked like the race would take place after all. The anxious participants started to gather at the barricades of the race pen and were hopeful that they would be able to run. Then the music came on again and everyone cheered cos the show would go on after all. I was happy too but was concerned how the wait would affect my run. I was confident before the rain but after the long wait, I was not so sure anymore. I was soaked to the bone, shivering cold and totally cooled down with no chance to warm up again.


The wife decided to DNS cos she was still uncomfortable with lightning that was still evident in the skies. I agreed that she should sit it out cos I didn't want to have to worry about her out there while I was running. I managed to stumble upon Jamie, Choon Yuen and Seng Chor and we all headed to the start line awaiting race start. Ready, confident or not, I was here to run and I'll get the job done as best as I can. After a short speech, we were finally flagged off. I took off to race pace immediately. Jamie caught up in a bit and we ran together for a while before my right calf seized up at the 2.5km mark. Crap! I had to slow down to practically a walk to shrug it off and lost sight of Jamie who was all fired up.

I went into the race with a busted toe from the night of the Start/Finish arch installation where a steel barricade fell and smashed my left big toe. It was in excruciating pain and was swollen even till race day and I was expecting it to give me issues but not a freaking seized calf for god sake! I put it down to the long wait and cold. I shrugged it off as best as I could, lost nearly a minute of my pace due to walking and immediately got back up to speed.

No way was I going to catch Jamie now, not at the pace he was dishing out but I used that as a motivation to start a chase. It worked fine too cos I was soon catching up with all those who ran past me earlier. The legs started to finally work properly. The route was extremely familiar and I knew the ups and downs of each twist and turn. 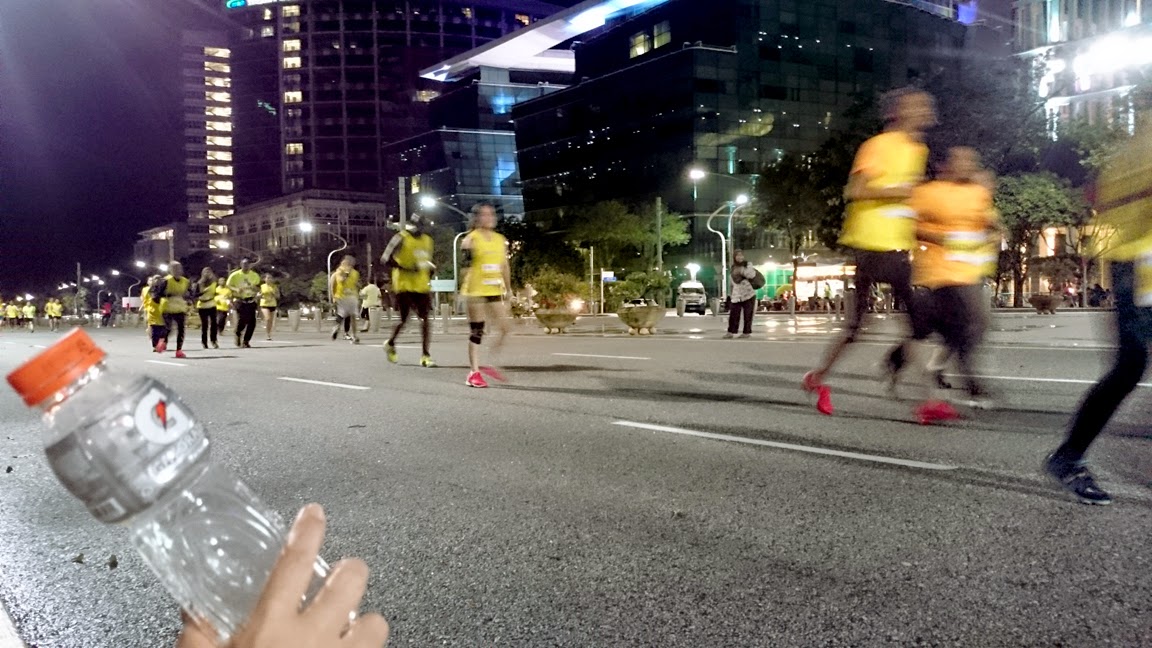 Surprisingly I was pacing up the inclines faster than on the flats and this from one who practically hates inclines! At the 8k mark, I glanced at my Garmin and realized that I could probably finally break my 10k PR that I've been trying to break for ages. I upped the pace and was soon doing 4:20 splits. I hit the 10k mark in a time of 49 minutes. I was ecstatic, I finally erased my previous 10k personal record! Then it hit me that I could even better my previous Shape Night Run record two years ago which was set at 1:02 in 2013.

With nothing to lose and everything to gain, I stepped on it and gave it my all the last 1.2k of the route. Just as I headed towards the finish, I saw the wife cheering me on. That gave me an added boost and I finally crossed the finish on a very wet night in a time of 56 mins, a whole 7 minutes off my previous best! I was overjoyed. All those countless mornings spent training is really paying off.

My two fellow training partners, Jamie and Choon Yuen ran a great race too with both of them achieving their respective PR's. Thanks to the both of you and the entire GCAM gang for the countless hours of training we do together which was what contributed to this. A big thank you most of all goes to the wife who has always been my source of inspiration and support. 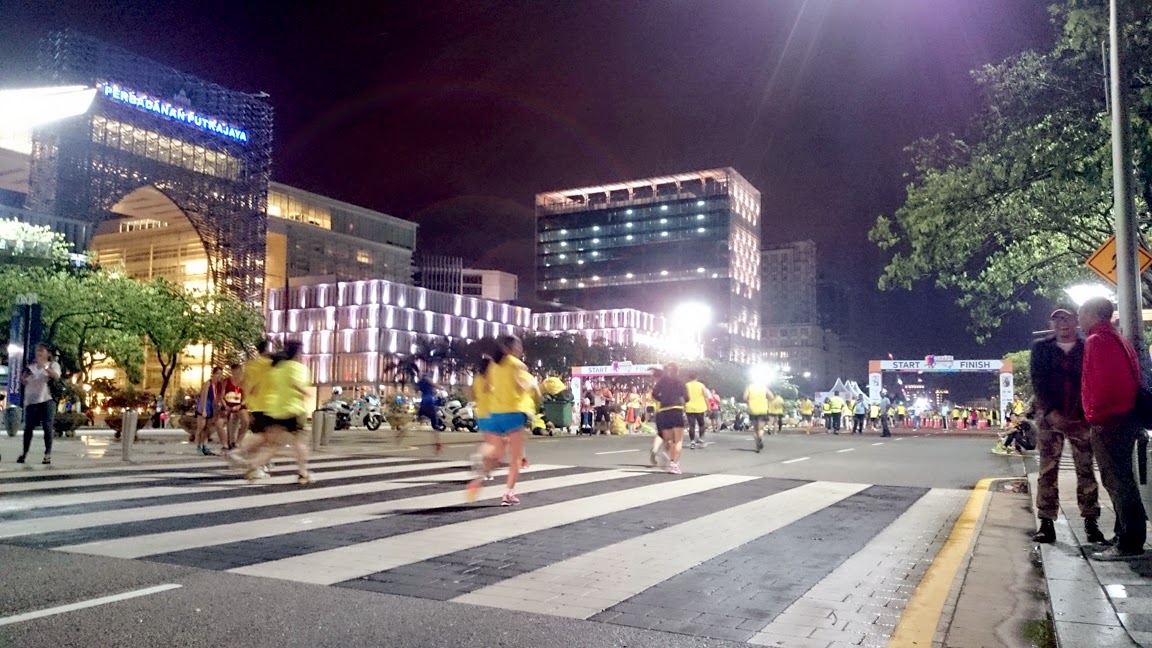 This race was used as a gauge to see where I stood in my preparations for GCAM and things look encouraging after last night. I'm not going to be too overly confident but at least it looks like everything is heading in the right direction. I just have to keep doing what I've been doing with a few tweaks here and there in my training plan as I go along.

Before I end though, I'd like to say thank you to Skechers Malaysia for the hospitality you showed and the opportunity to run under your banner. My shoe of choice, the GOmeb Speed 3 worked superbly to see me through this extremely wet race. Here's looking forward to next year!

And lastly, to the crew and volunteers who braved the storm to provide the support we needed to get through this race. You guys are the real champions in my book! I know a lot of you on a personal level and will thank each and every one of you in person when I see you. Well done! 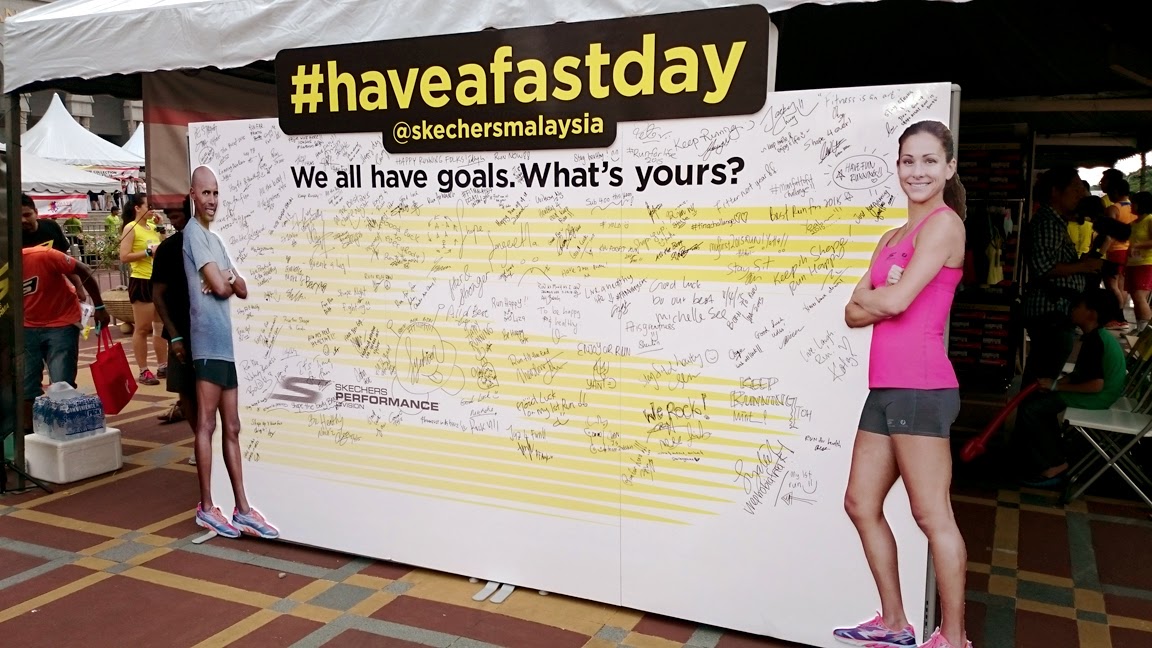