The Larian MPSJ 10K was a race I signed up for prior to the Gold Coast Airport Marathon and was looking forward to it for a few reasons. One was because it's considered a home ground race for me what with my house just a few stones throw away. Secondly, I was in need of a new 10k PR and this race seemed ripe for a new one.


All that changed with the stress fracture I picked and I wasn't even sure I'd recover in time for the race. Thankfully, I managed to recover pretty well but all hopes of a new 10k PR was out of the question. The race would now be used to gauge my fitness level after the 8 weeks layoff.

The wife, my younger boy (who was running the 7k category) and me met up with Jamie, Choon Yuen, Zijill and Choo at the pre-arranged spot. But it wasn't without drama though. Just as we were about to leave Choon Yuen called and said he forgot his shoes and whether I had any shoes to lend him. Shoes, I had plenty but I'm a size smaller than him. I grabbed two pairs that I hoped would fit him or else we'd be seeing him bare-footing today. Thank god one of the pair fit him.


We all made our way to the MPSJ track where the main activity was. The start would be just outside the track. The flag-off was slated to start at 7.30am and most of us weren't really too happy with it cos that would mean we'd be running back in the blazing morning sun. I personally would have preferred a 6.30am start or even at the latest 7.00am. I run around these parts daily for my training runs and I know how hot it can get if I were to start a training run late.


But late start or not, the show had to go on. I was prepared for it and had my shades on cos we'd be running back facing the sun. The flag off was right on time and the plan was for a conservative run. At least that was the plan. The route was familiar to all of us and wasn't demanding at all, pretty flat save for a few short climbs.

We all managed to keep to a pretty decent pace. I managed to keep up with the rest though my calves were still as stiff as steel! Overall, the pace was pretty manageable and though my lungs were struggling to keep up, things were generally fine. No signs of the SF injury were apparent which was a positive sign.


Just before the 5km u-turn, we started counting the women runners on the way back. There were just 10 women front-runners after the u-turn. Jamie then decided that we could slowly pull Zijill along faster and get her into a top 10 finish. Of course, we didn't let her know. We just surrounded her discreetly and started dragging her along at a little faster pace. Soon we got her past 2-3 more women runners. Jamie and Choon Yuen were on fire. I was having a hard time keeping up. A little way ahead, I saw my younger boy just making the 3.5km u-turn for his category. I slowed and tried to drag him along but he gave up and I took off again after the trio in front. 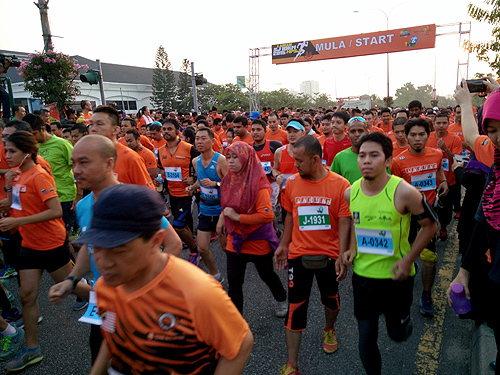 They were too far gone. I was totally not fit enough to play catch up and just decided to make it to the finish as best as I could. The sun was already blazing in full glory and the faster I got back, the faster I could get under some shade. The last 1 plus kilometer was a little hectic with some bad traffic management and cars were honking and trying to drive through the runners. I was more worried for the little kids running along than anything else. Most of these drivers were an impatient lot!

Finally, after what seemed like an eternity, I reached the track and sprinted the final 200m to the finish. The wife was our photographer for the day and was happily snapping away. Collected my medal, a goodie bag, grabbed some fruits and drinks and made my way to some shade. Joined up with the gang and we all traded race stories before heading back home. 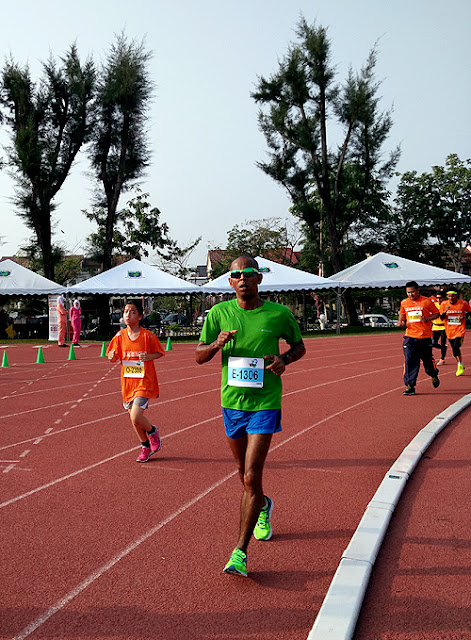 Overall, it was a decently organized race, save for the later start and traffic management at some points. The route was nice and familiar and I enjoyed the run with some great company. But most importantly, I now know where I stand in the fitness department and have some doing to get back to where I was before. The pace is still there, the legs still remember how to run but the stamina is what is solely missing at the moment.


But I'm not rushing into getting back in shape. I don't have any major races coming up, save for a 52k end November, so I can concentrate on slowly building up the endurance again with no pressure. I'm a little more wary about injury these days and have stopped being so gungho in the way I train and run. Injuries suck and no running sucks even worse.

I'm not exactly sure of the younger boy's timing but am glad he signed up to run the race anyway. I'm hoping he keeps on running after this and signs up for more races. He has potential but can be lazy to put in the training. If I can't qualify for Boston one of these days, maybe he can do it for me!