I've been hearing so much positive reviews regarding the Skechers GOrun 4 (GR4) that I really couldn't wait to get my feet on a pair. Skechers Malaysia teased me with a picture of them in October and said the review units would be coming soon, along with the Skechers GOrun Ride 4 (GRR4) and the GOmeb Speed 3. Unfortunately, while I got the GR4 and the GRR4 for review, the GOmeb unit that came for me was of the wrong size. *Cries* 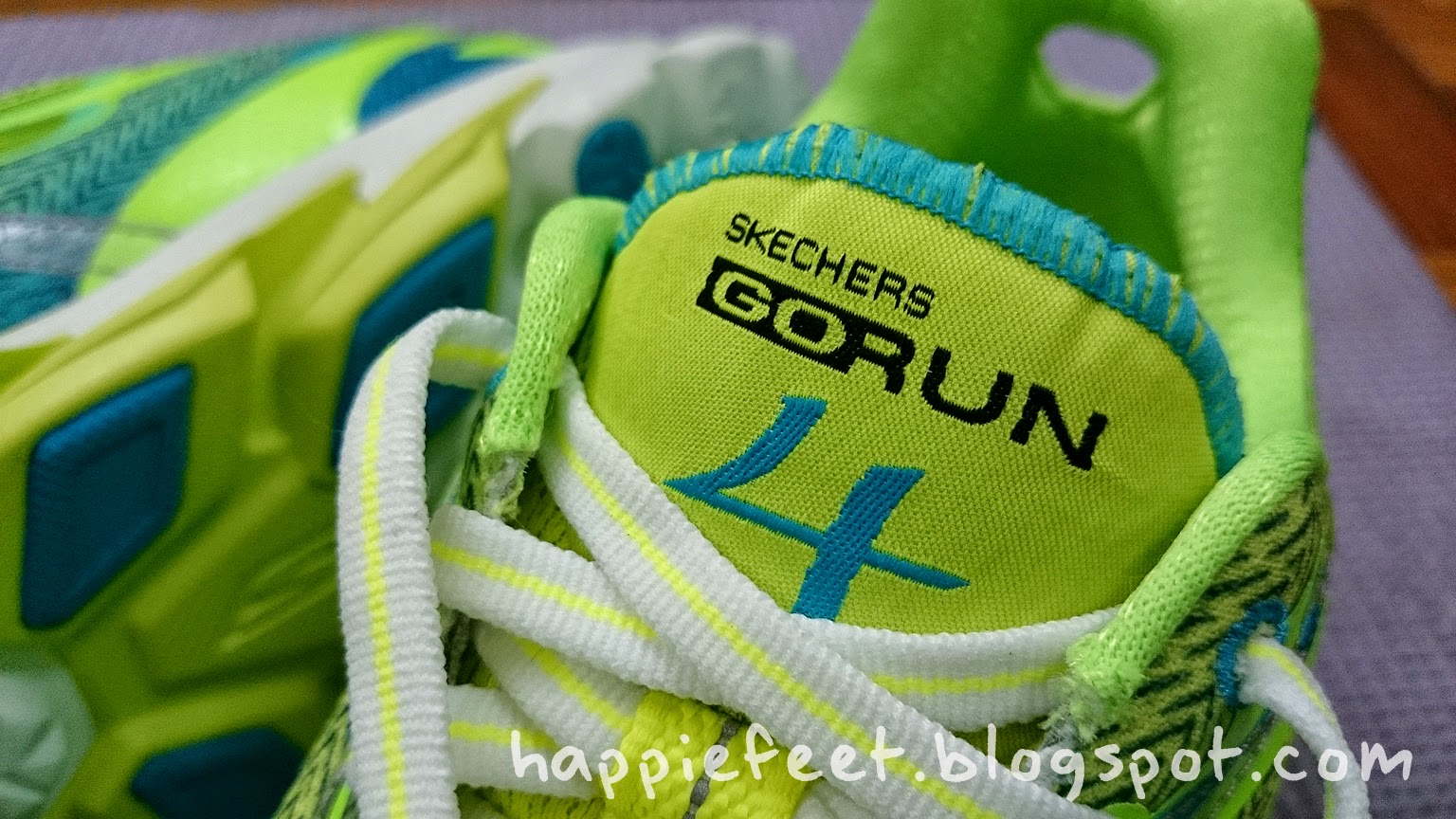 Armed with the early 'Christmas presents', I simply couldn't wait to get home to put the shoes to work and see if all the positive reviews for the Skechers GOrun 4 was actually justified. The first thing that got a thumbs up from me even before running in them was the green colorway that I got. I love flashy shoes and the GR3  was seriously a tad bit boring in terms of colorway. I'm glad Skechers seem to be heading back to the flashier colorways.

Once I put them on for a run though, I simply fell in love with them. I started my Skechers love affair with the original Skechers GOrun, even ran a marathon in them. Didn't really dig the GOrun 2 all that much but simply loved the GOrun 3 iteration of the shoe. Then GR4 came along and took my breath away, literally! 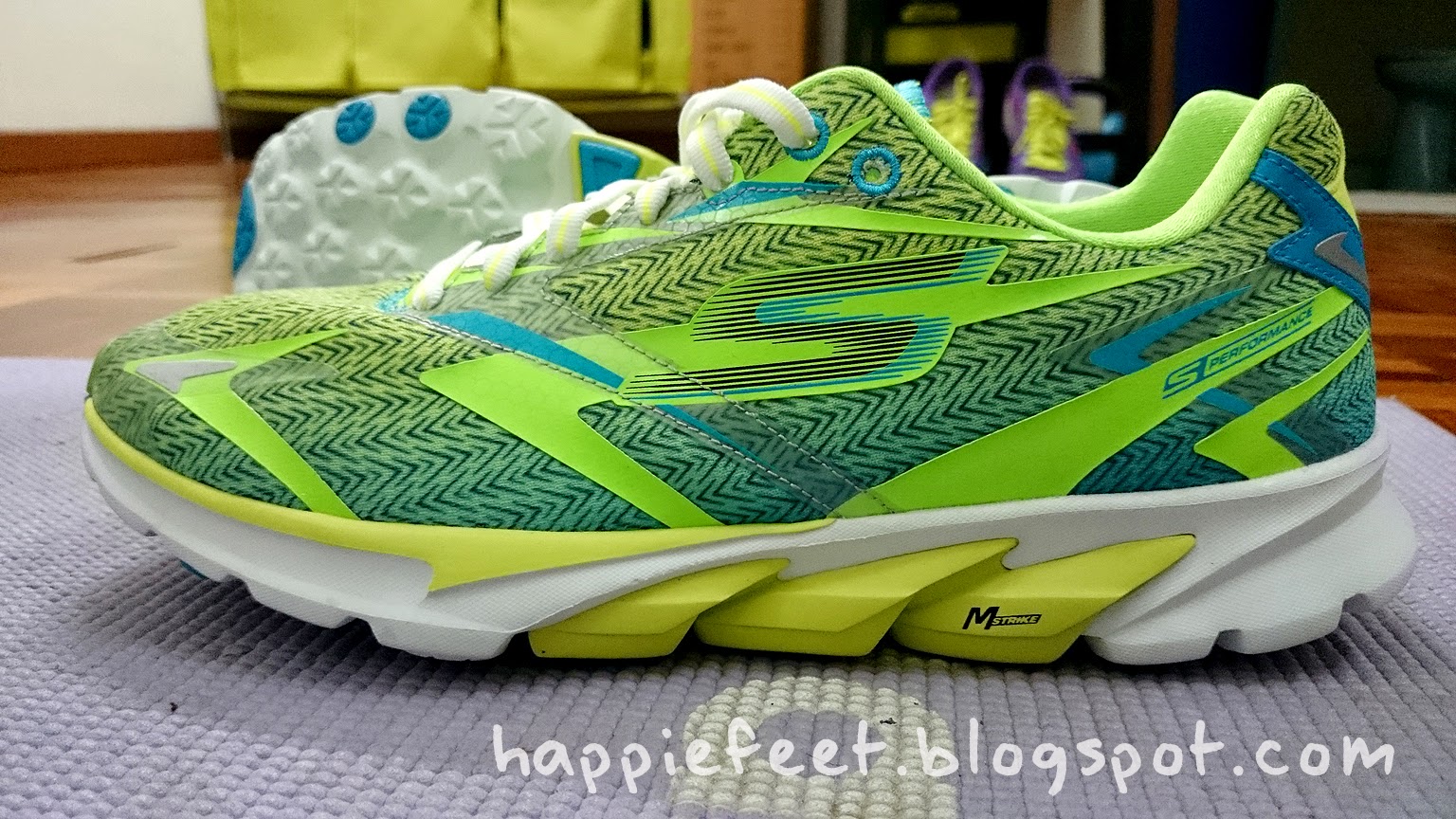 The Skechers GOrun 4 is a complete overhaul from the GR3. Everything about it has been changed and tweaked, right down from the outsole to the flashy looking upper. How does it compare to the previous version? While there are still some similarities, it's a complete move away from the GR3. A better one, in my humble opinion.

Weight wise, while the shoe is still pretty lightweight, the GR4 is a little heavier than its predecessor. The slightly thicker midsole is the reason for the added weight. But generally, it's still pretty lightweight and I seriously didn't notice the weight difference during my runs. My review unit didn't come with the box or any literature so I can't really give you the actual weight of my size 8's but based on a few checks I've done online, the men's size 9's weigh in at 7.8oz. 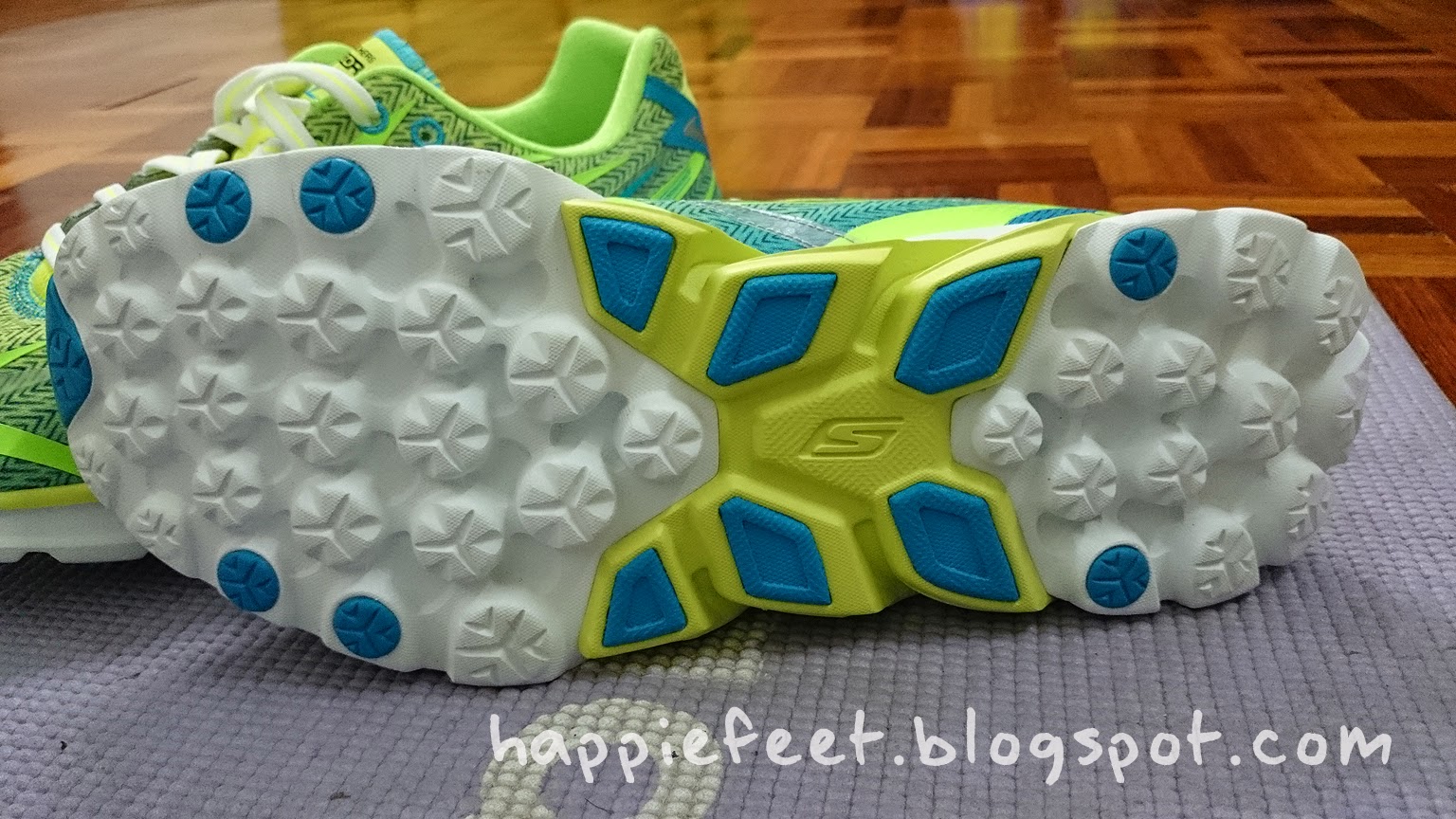 The thickness of the midsole is at 18mm at the heel and 14mm at the forefoot giving it a 4mm drop. The GR4 comes with the custom 2-in-1 insole right out of the box but since mine came without the box, the insoles were also not included, not that I mind cos I normally run without the insoles for all my Skechers shoes since most of them have a nice finished footbed underneath. The insole do add an extra 4mm to the GR4 though, giving it a total of an 8mm drop.

The new overhauled single piece upper is composed of a an outer layer of tightly woven mesh over an inner layer of additional mesh. The overlays add good support to the upper. The upper fabric image is printed on with a sublimation technique and 3D printed overlays, giving extra structure but not too much added weight. The tightly woven mesh does a decent job of keeping debris out though it does compromise some breathability. 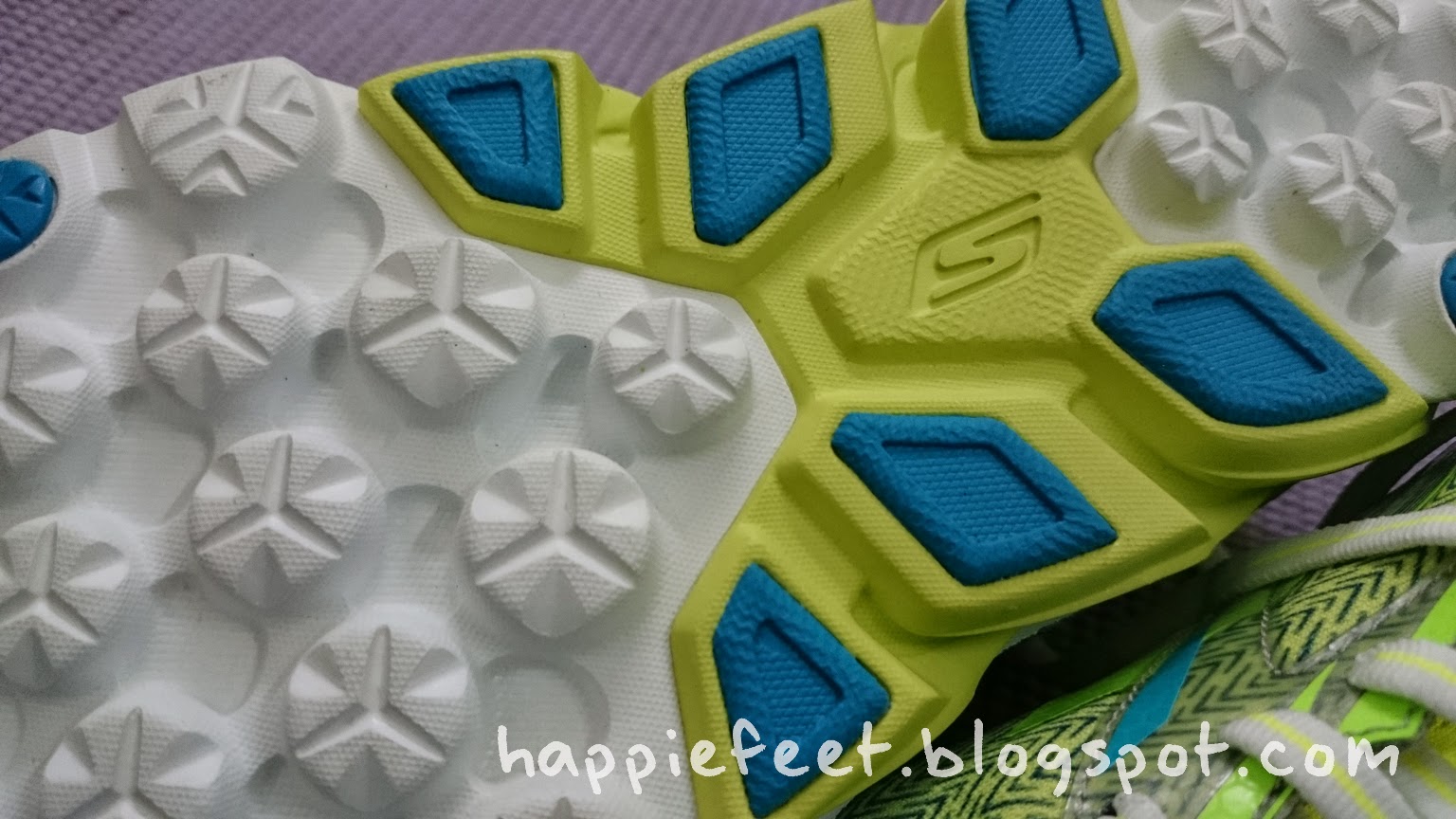 Most of the support comes from the welded overlays of the upper. Skechers Performance has seen fit to add some extra padding to the tongue. While I had no real issues with it in terms of slipping, I still prefer the thinner tongue of the GR3. The lacing remained the same with a little elasticity to it.

Skechers Performance added a rather 'unique' feature to the GR4 called the QuickFit Portal (QFP) which was added to the back of the shoe. They basically cut a hole in the heel which is intended to be used as a finger loop to help put on the shoe faster. I personally don't see the need or any benefits that come out of it. Maybe it might benefit a triathlete during transition or something, shaving off a few crucial seconds but it really didn't do much for me. I was more worried that it would give me blisters. I tend to run with ankle socks and was afraid that my ankles would grind against the edges of the hole but it was proven unfounded cos after a few runs in them, it seems benign. Like I said, it doesn't really serve much purpose though. 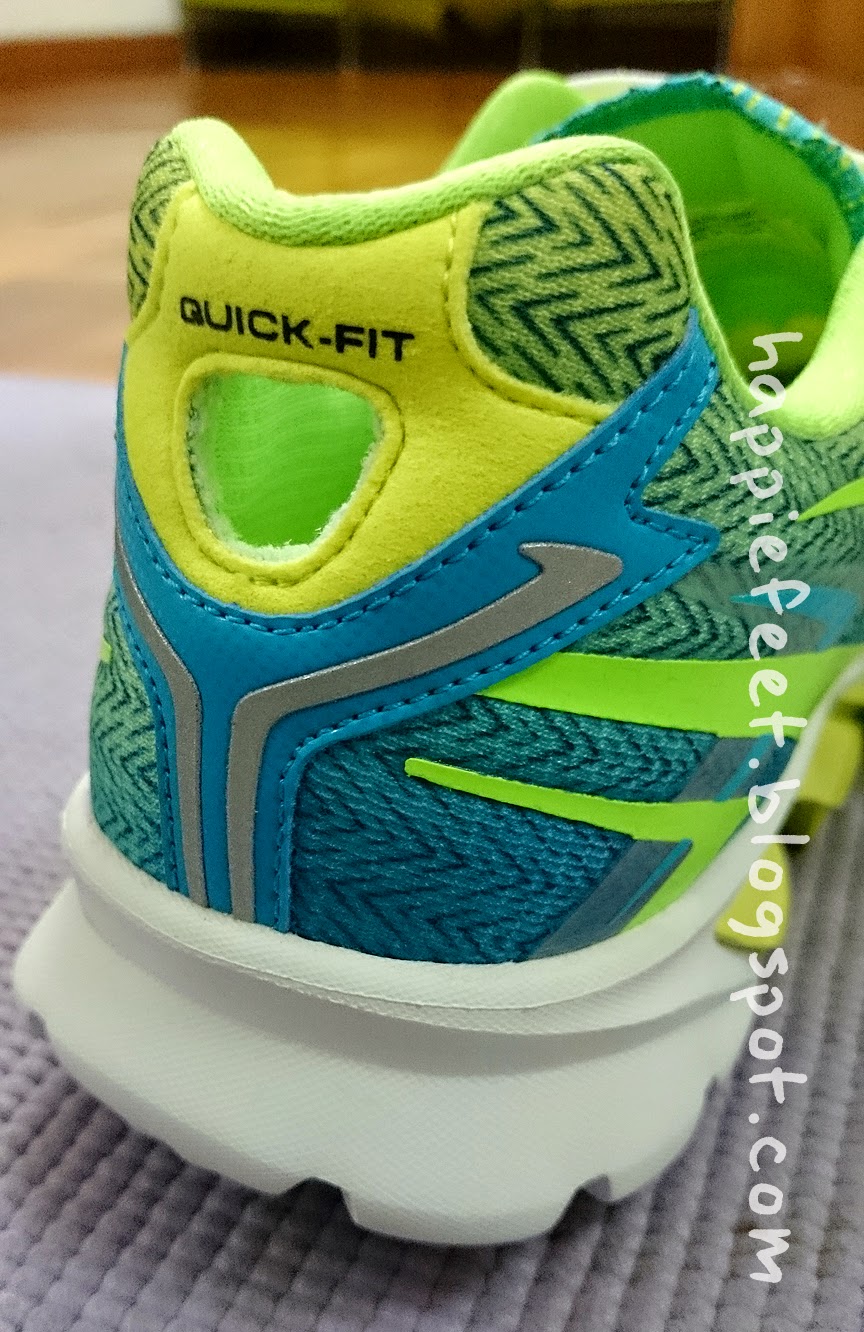 The heel counter is a near perfect fit for me and keeps the foot secure without having to tighten the laces too much but I still love the heel counter of the original GOrun though. The insides of the GR4 is lined with soft padded mesh that is purported to make sockless running comfortable though I can't verify this cos sockless is not my thing.

The fit is a little narrower than the GR3 but the fabric is reasonably flexible and does a good job of holding my foot in place without being too restrictive. The toe area now has a more traditional shape to it though it still features the same wide toebox of the Skechers shoes. Overall it had a nice sock like fit that tends to disappear on my feet. No pinching, sliding or hot spots. 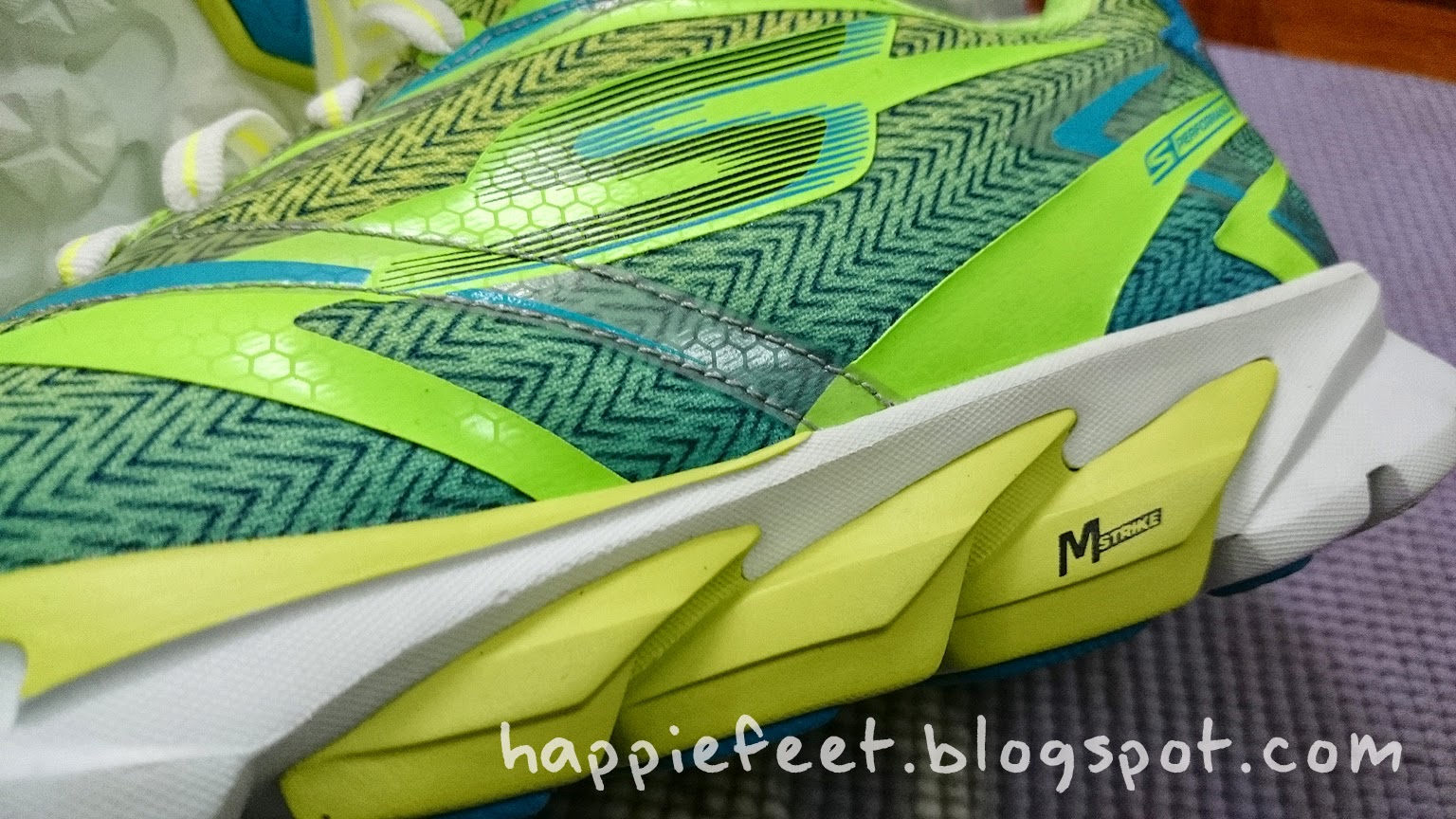 The shape of the outsole is basically the same and is built on the same last but with a much more different placement of the rubber lugs with the pattern being changed a little too. Grooves can be seen cut out on the pods. The midsole does gain an extra bit of thickness providing a little more cushioning compared to the GR3, soft enough for comfort yet firm enough for speed. The GR4 does seem much stiffer than the GR3 though it still remains quite flexible. The firmness of the GR4 has been said to resemble the Saucony Kinvara 5 but not having run in any Saucony shoes, I really have no opinion on that. The lugs are now a little deeper though and I've had one or two pebbles getting lodge in them unlike the GR3.

One thing that still bothers me is the durability of the outsole. I tend to grind my heels at times on longer runs or when I'm totally exhausted and all of the Skechers shoes that I have shows heavy wear on that area. Judging by the lack of additional reinforced lugs around that area, I foresee the same problem occurring again. That has always been the bane of almost all Skechers models. 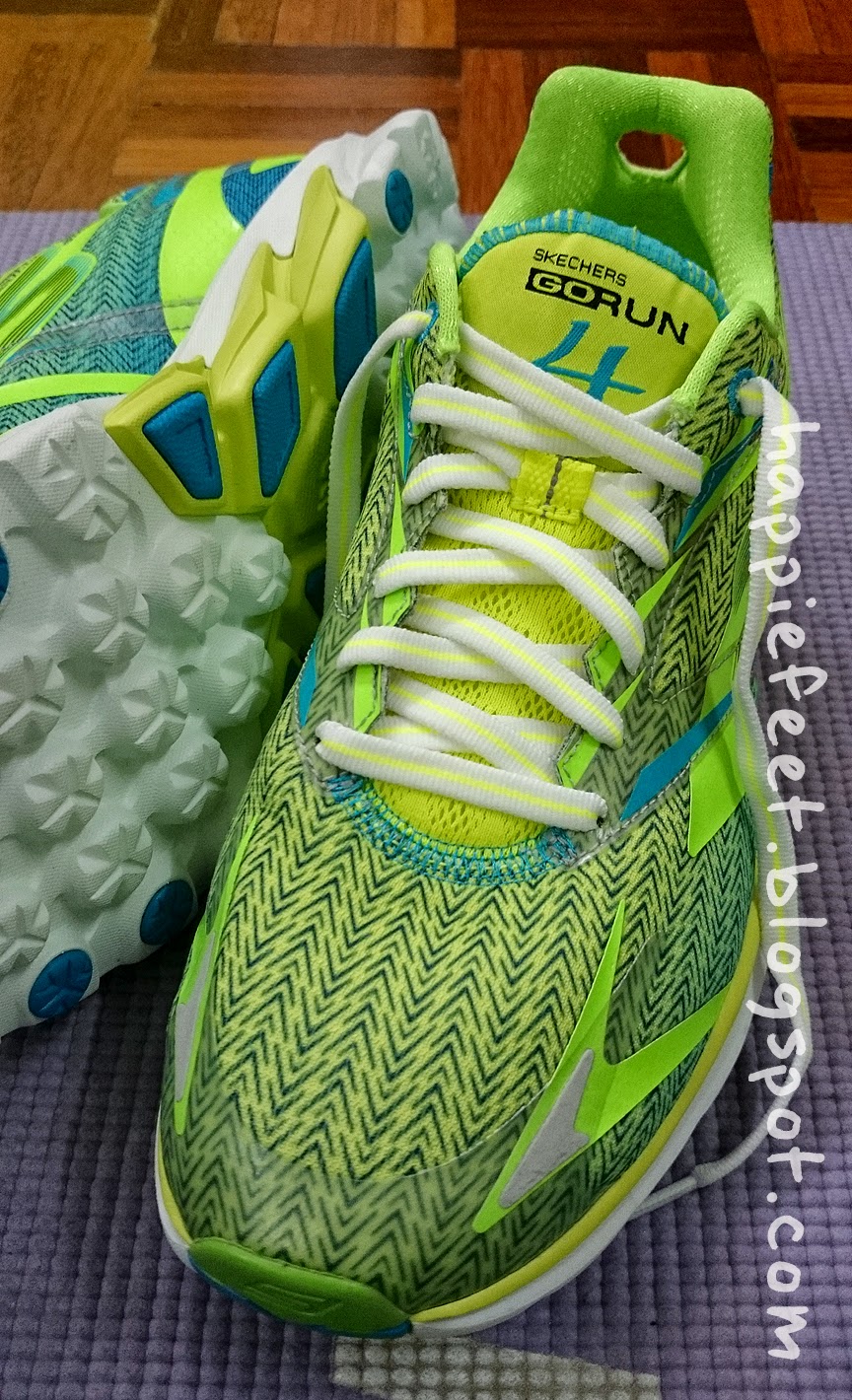 I've put in some short distance runs in them and they've been very responsive. Every run I do them feels fast. They adapt to changes of pace with hardly any problems. Like I said above, the fit is just nice for my feet and I hardly think of them anymore once I slip them on and hit the roads. They just disappear.

With the total overhaul of the shoe by Skechers Performance, taking it on a different path away from their usual fare, I was kinda skeptical that they would ruin the success of their previous versions but it proved unfounded cos this is simply a remarkable update. The Skechers GOrun 3 was an excellent shoe, this is simply much better! 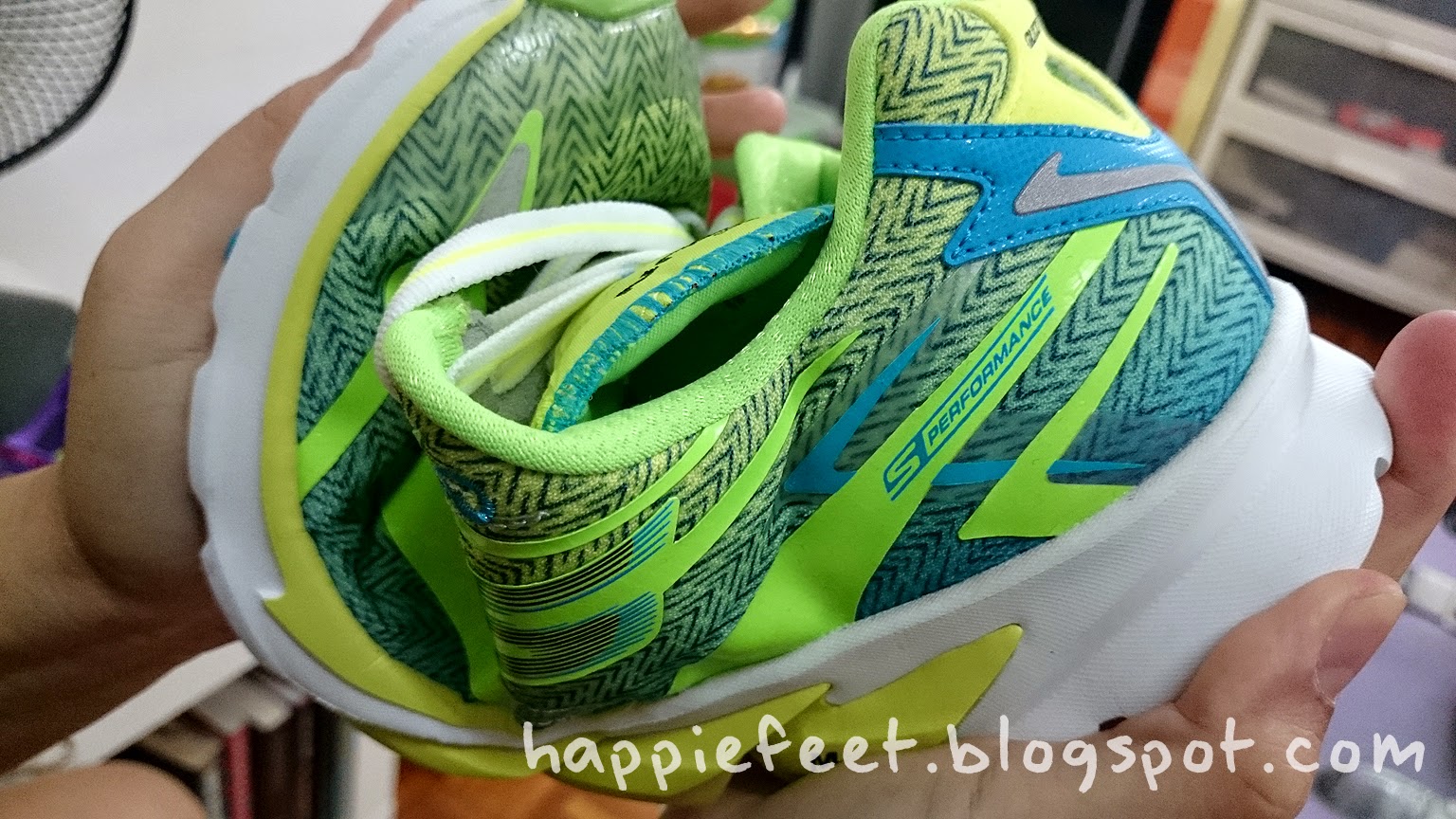