I'm really positively, definitely, absolutely banned from buying anymore running shoes by the wife especially since I just went out and got myself the Brook Launch a couple of hours ago even though I very recently bought the Pure Connect hardly a month ago. The wife has threatened to throw all my shoes away if I buy another pair of running shoes, well at least until the other pairs are completely worn off.

But you can't really blame me for buying a new pair of running shoes. I initially wanted to get the Brooks Launch just after the Siemens run and when I went to the Brooks outlet in Sunway Pyramid to get it back then, they were pre-launching their Pure Series. Now, what could a guy who absolutely adores shoes that are produced by Brooks do? The shoes were there for me to hold and drool over. They only had limited pairs available and fortunately my shoe size was one of them, so I bought them and told the wife, I'll skip getting the launch.

But heck, I've had my eye on the Launch for quite a while too but was warned about getting another pair so soon. But today as fate would have it, we were at the Brooks outlet in the Curve cos she wanted to get something there for her running. And since the shoes were on display there and the color was right and the size was available and, and, and ... urrrmmm, and since I really, really, really needed it, I bought it albeit with a word of warning that my allowance for buying shoes are totally drained for the year ... hahaha! 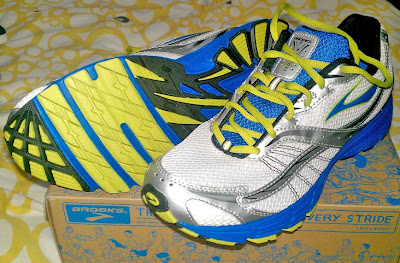 And here I am, a proud owner of a new pair of lightweight trainers which I'm seriously contemplating using for tomorrow's PJ Half. I'm an advocate of not running in brand new shoes though I did run in a brand new untested Green Silence during the Shape Night run and thankfully came away unscathed from that experience.

Up to this point I'm still undecided on what shoes I'll be using tomorrow. So far, until the Launch came into the picture, It was a toss between the Green Silence or my Mizuno Precision 10. I haven't used either of these shoes for a 21K before and was thinking of putting one of it to the test, but now I'm not so sure. The Launch looks like a good bet to be on my feet tomorrow.

And speaking of the PJ Half, I'm a little skeptical about how I'll do in the race tomorrow. My training this week has been short of pathetic with only one 15K run done over the Deepavali holiday. Rain and especially work has been playing havoc with my schedule. I'm just going to take things easy tomorrow and not push myself too much. Thankfully the route is a pretty forgiving one and has loads of flat stretches with two or three inclines. The only worry would be the sun. Hopefully it rains tonight and the sun decides to sleep in a little.

Anyways, to all running the event, have fun and all the best :D