I wasn't really looking forward to this run. The route for the CAPAM run was the exact duplicate of the PNM route the previous week and the thought of having to have to go through it again was really not very appealing to me. I suffered tremendously during the Putrajaya Night Marathon.

When I signed up for the CAPAM run, I didn't know which route they were going to be running. The route info was practically non existent on the organizers website. I only signed up cos the distance matched my training plans for the week. It would be like an LSD with a whole bunch of other people.

At least I had the company of Jamie, who was also crazy enough to sign up. Come race day, I reached the race venue early to pick up both Jamie, Choon Yuen (who couldn't make it due to work commitments) and my bib. I had to leave the bib collection to the last minute due to some unforeseen issues. The wife decided to tag along to lend support  and to be my unofficial photographer. 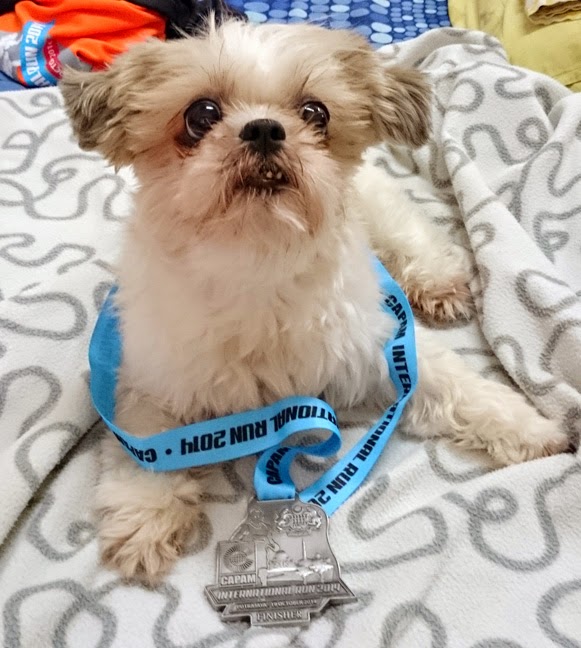 The weather though was lovely. It rained the night before in my place and I'm not sure if Putrajaya rained or not but the place was cool. Perfect weather for running. But I was expecting things to heat up fast as is always the case with Putrajaya.

For an event dubbed with the words international in it, there was surprisingly few participants. Jamie and me warmed up, and headed to the start pen for the 22k (yes, it was officially a 22k event) runners to await our start. The MC got on my nerves with his rambling and I couldn't wait to be flagged off to be rid of him. 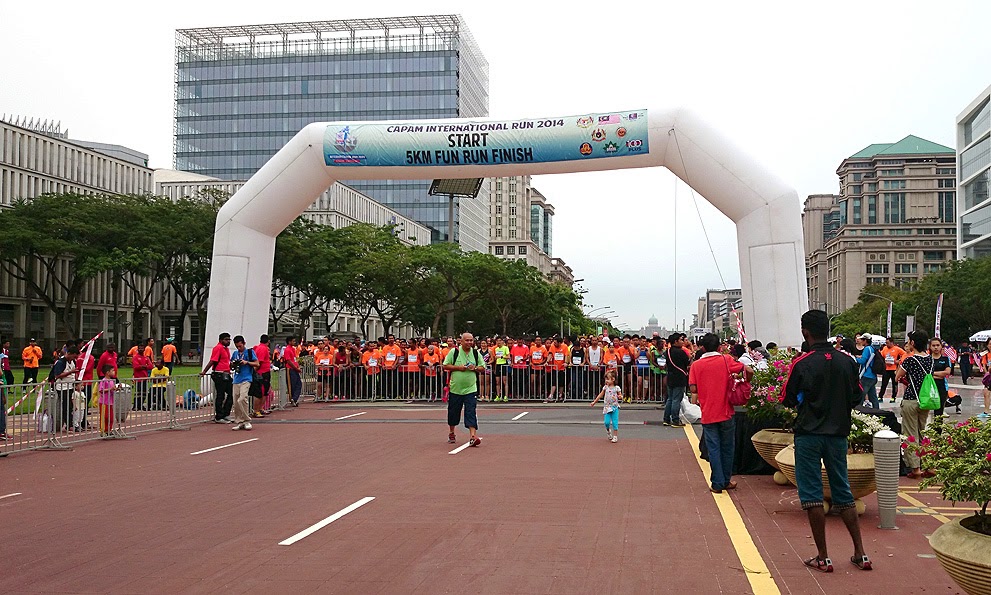 The gun went off right on the dot at 6.30am and it was time to get to work. Since I was familiar with the route and its ups and downs, I was at least much better prepared to negotiate it this time round. The initial start pace was a tad too fast with the Garmin clocking in at 4:55 minutes for the first kilometer. Both Jamie and me decided that it way too fast a start and dialed the pace back down. After all, there was still a long way to go and we had to keep something in the tank for the second half of the race.

We ran together for close to 18km averaging a 5:15 pace, slowing when we had to and stepping it up when we needed to. Water stations were grab and run cos both of us weren't planning to stop just to re-hydrate. Every second we kept moving counted. The water stations were spaced out exactly as in PNM and that made it easier to anticipate when we would reach them. A nice mix of water and isotonics as well.

Surprisingly, I was feeling fine, even with a pace I wasn't really comfortable with. The legs kept going with not much protest and no signs of the knee issues showed up. Thank god. As I had decided earlier, when we reached the Taman Cabaran area just after the cemetary, I walked up both the inclines. Lost some precious time there but I wasn't about to challenge that climb. Once that was done, I got back into a steady pace again. Somewhere around the 18km mark, the 10k runners merged with us and things got pretty crowded. 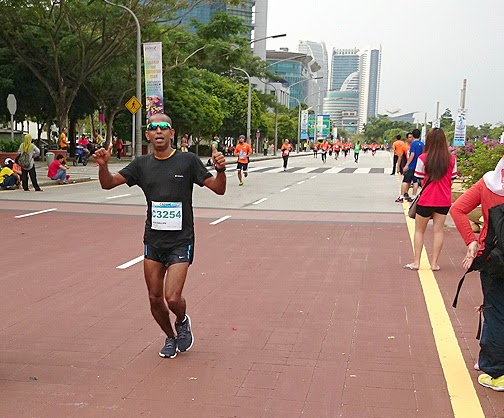 At this point, I was already feeling tired. I didn't have breakfast prior to the race and had no gels with me. I was hoping that this wouldn't be a bad decision. The legs were already showing some signs of fatigue and I stopped at the 18km water station to walk. Thankfully there was no cramping this time. Jamie was still going strong and headed off on his own.

After a short walk to recover, I started my attack for the final 4km. I glanced at my watch and realized that I could finally break my 3 year old 21km PR. The confidence level rose. I upped the pace a little more even though I was gasping for air by this point. Surged up the final incline and passed the 21km mark in 1:54, I was ecstatic. My 3 year old 1:59 half marathon time was finally broken.

Now all I had to do was make it through the last 1.2km and the torture would be over. Once again the thought that I would shave off last weeks PNM timing was spurring me on. With every bit of effort I had left in me, I made a bee line to the finish and crossed the line in a time of 2:01, taking 14 minutes off my PNM time last week. Oh the joy! 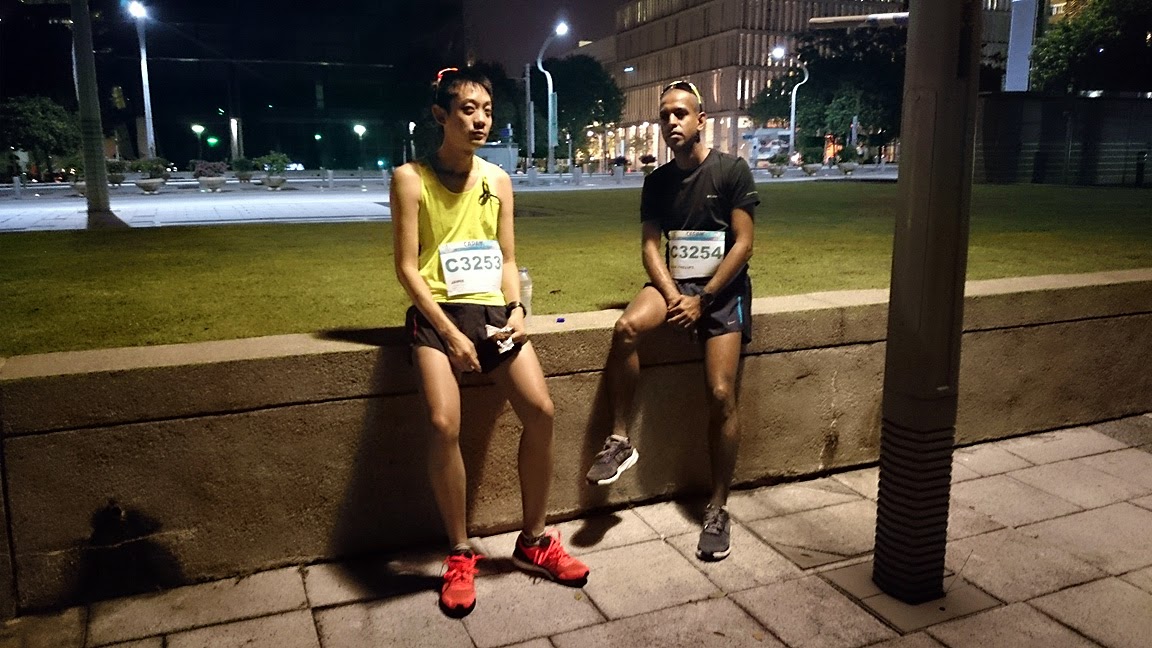 I really didn't expect the results I got seeing as how I wasn't at all confident before the race but I'm a happy camper today. I'm hoping this is no flash in the pan and that the training plan I've cooked up is what contributed to this somewhat. We shall see how it really pans out in the next three months or so.

While there really is nothing I can say about the event cos it was kinda low key for me, the organization was pretty good. The race experience was decent, the volunteers were as always spot on and did a great job. Kudos to them. The only complaint I have was the lack of mobile toilets. Overall, save for the annoying MC, I say it was a pleasant experience.

A big congrats goes out to Jamie for his superb run and thanks for the company, well at least for 18 kilometers of it anyway.