I wasn't intending to write anything about the Puma Night Run since I didn't run the event and instead volunteered for it but heck, it was such a lively and really well organized event that it deserves mention. 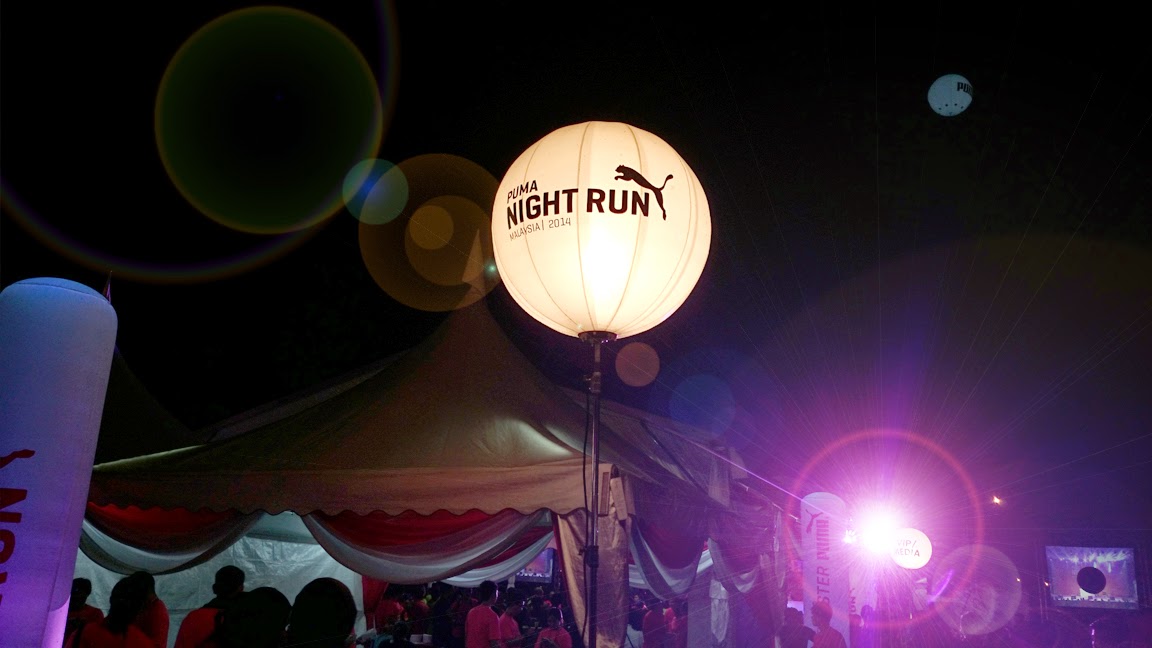 The registration for the event was kept to a small number and the slots filled up fast. In fact, I totally forgot about this event until I received an email seeking for volunteers. Since it was a night run and I have nothing better to do on a Saturday night, both the wife and me took up the volunteer slots. She opted for the food and medals bit and I opted for the road marshal job. 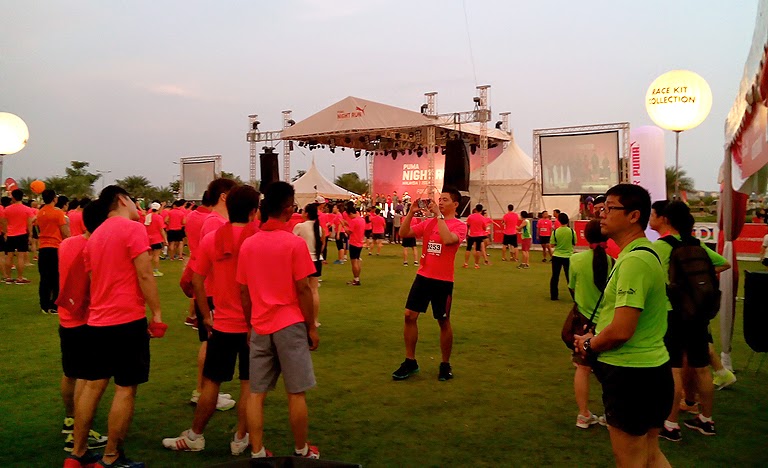 That soon changed when a few days before the event, I received another email from Wan Yew Leong looking for 5 individuals to be a mobile info person. It was something new and hasn't been seen in events here and I jumped at the chance. So my job description was switched from road marshal to mobile info man. I was looking forward to it. 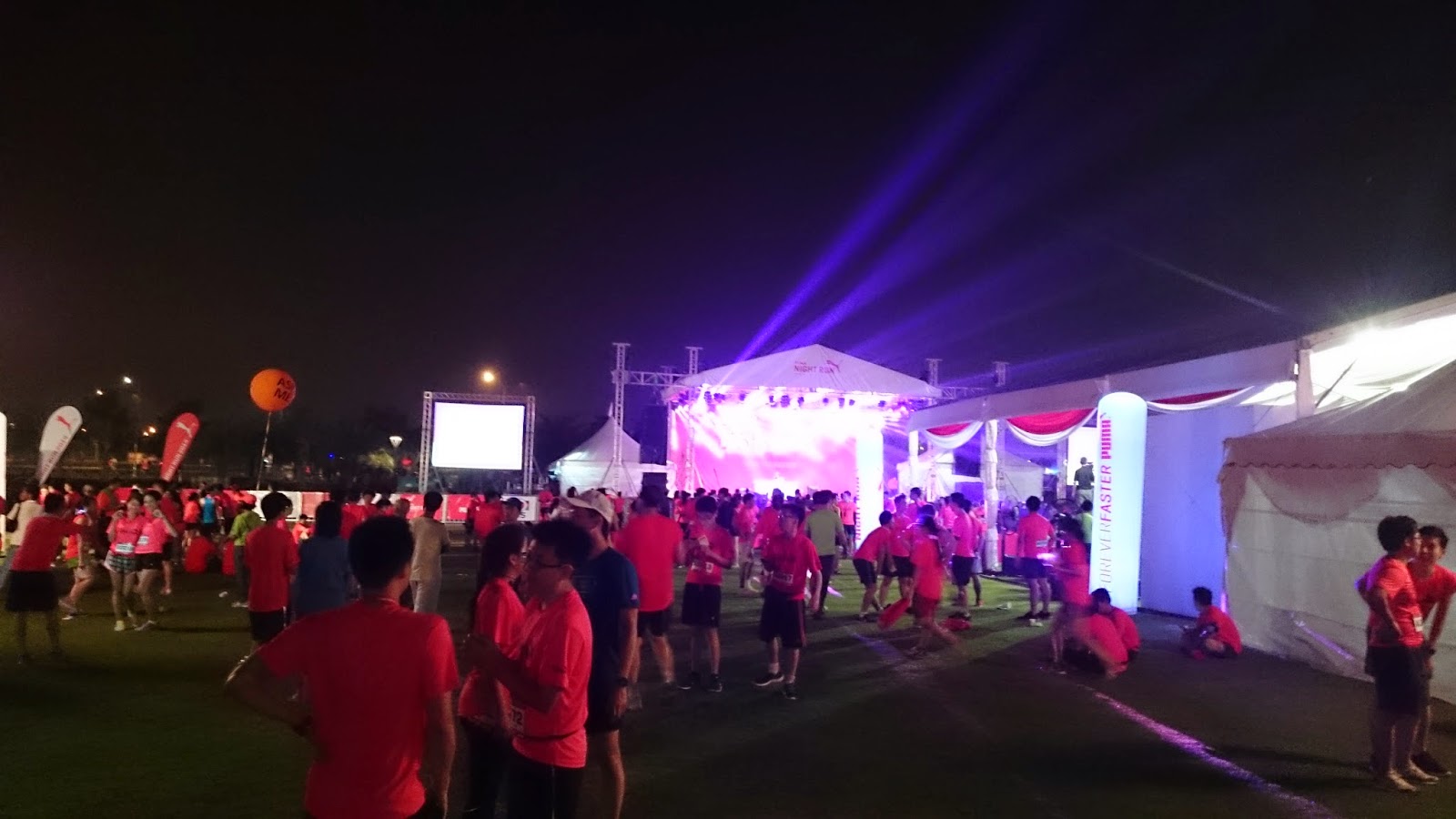 The morning before the event was a pretty hectic one. A tough and hard interval session at the MPSJ track with the wife, followed by haircuts for the boys and then grocery shopping. By the time all that and the housework were done, we both had time for only for a short nap before having to get ready to report in at the race location.

The Puma Night Run had its venue in the park/field beside Setia City Mall, a very nice location for an event if you asked me, though it was a little bit out of the way for us. We reached there early like we do for all events, running or otherwise and headed straight the race secretariat.

The field was already buzzing with activity and people, both shoppers from the mall out to enjoy the event fares and also participants who came early. I was impressed. I've seen race setups and even been involved in them but this was looking good, really good. 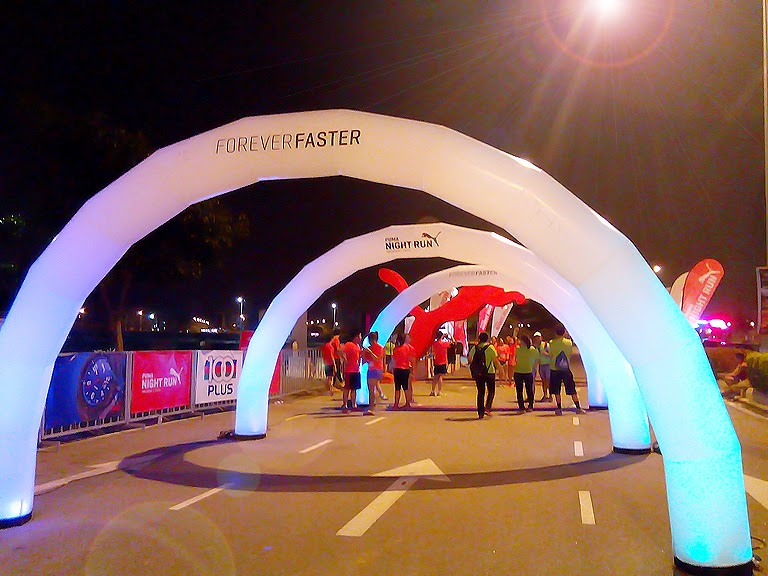 After picking up our volunteer tee and waiting for Zane and Foo, who also volunteered, we all headed to the field for reporting of our respective duties. Everyone was briefed on what we needed to do and I was finally given my orange helium balloon with the Puma logo and 'Ask Me' words boldly emblazoned on it. It was time for work.

Ok, a little confession here. I hardly studied the runners guide and venue layout and just played by ear. A quick check around so I was familiar with the surroundings and I was ready for questions, as long as it wasn't questions about the meaning of life, I could probably wing it :D

By this time, the venue was filling up nicely with a multitude of runners. The atmosphere was simply electrifying. The stage was a hive of activity with Phat Fabes doing a good job of working the crowd up. At least a professional MC was on hand unlike a particular annoying one at a previous event. A couple of really nice performances were on hand to entertain the crowd before race start.

The crowd seemed to be enjoying themselves and so did I. Being a mobile info person, your job description has you 'patrolling' the venue and you get to take in everything. Puma did a good job with the entertainment at the race venue and interaction with the runners. A huge bit was probably spent by them to make the event what it was. One of the best I've seen so far, kudos to them.

I believe that keeping the entry numbers low was a very good call by them. Too many other brands have this fetish of chasing the numbers but hardly providing a satisfying race experience. The bigger the number of participants doesn't always mean the better the event is. Even as a volunteer I was enjoying myself. The crowd was a mixed of young and old, mainly young which is what the brand philosophy was all about but at least they weren't obvious about it. Again, kudos to them. 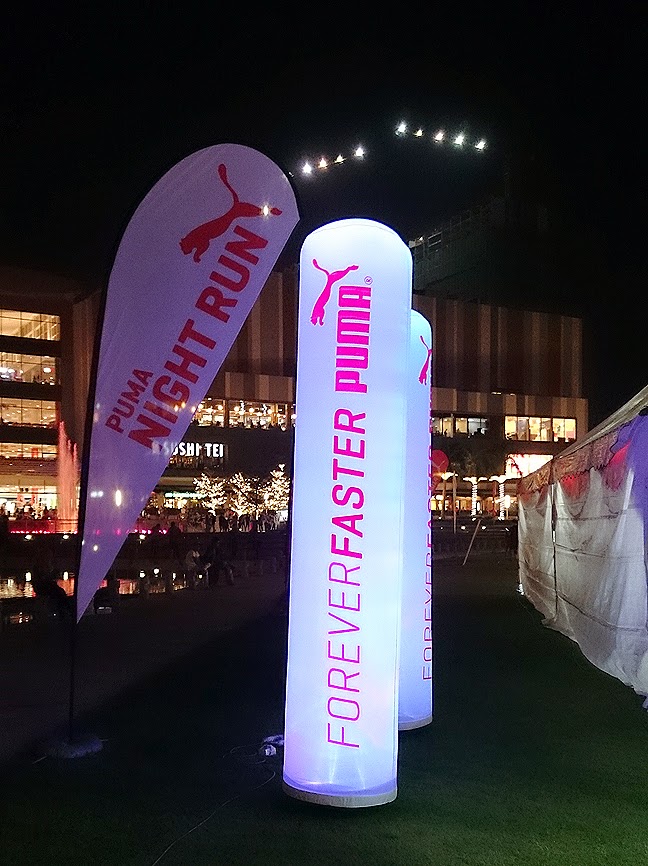 As for me, I was having it easy so far. All the questions shot at me were pretty easy ones, 'Where's the start location?, Where the baggage counter?, Do I need to report in? Are you married? (okay, okay, that was a joke)', which was a relief really. Some of them also just wanted pictures with the balloon which I gladly obliged, after all, how often does one get the chance of attracting this much attention. My small, short attempt at fame ... hahaha!

During my rounds, I caught up with lots of familiar faces enjoying the hospitality provided by Puma. Slightly after race start, there was a slight confusion with the medals and banana location which saw my fellow poor volunteers having to lug around the medals and bananas in and out from the start to the secretariat tent and back. 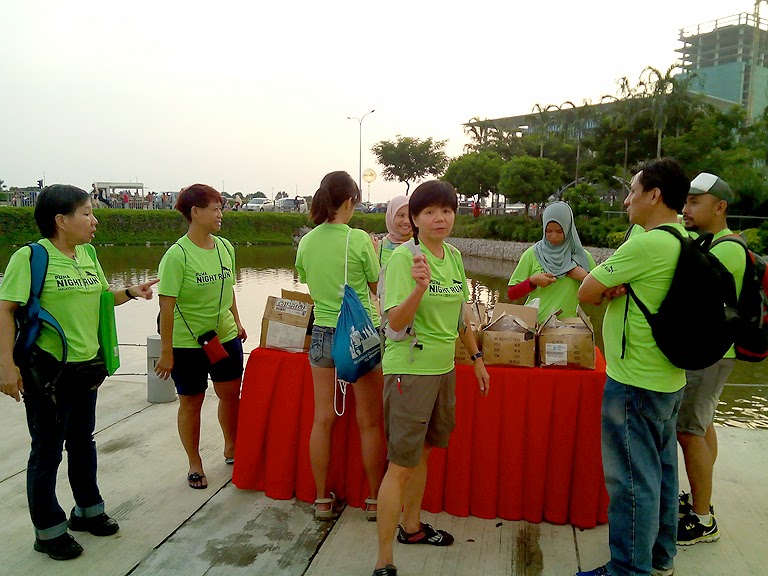 Since the runners were already flagged off and I had nothing to do till they came back, I decided to help out. It was back breaking for them, the medals and bananas weren't exactly light and they were mostly women lugging it around. We managed to get the medals and bananas back out to the start just in time before the first runner crossed the line in 32 minutes or so. 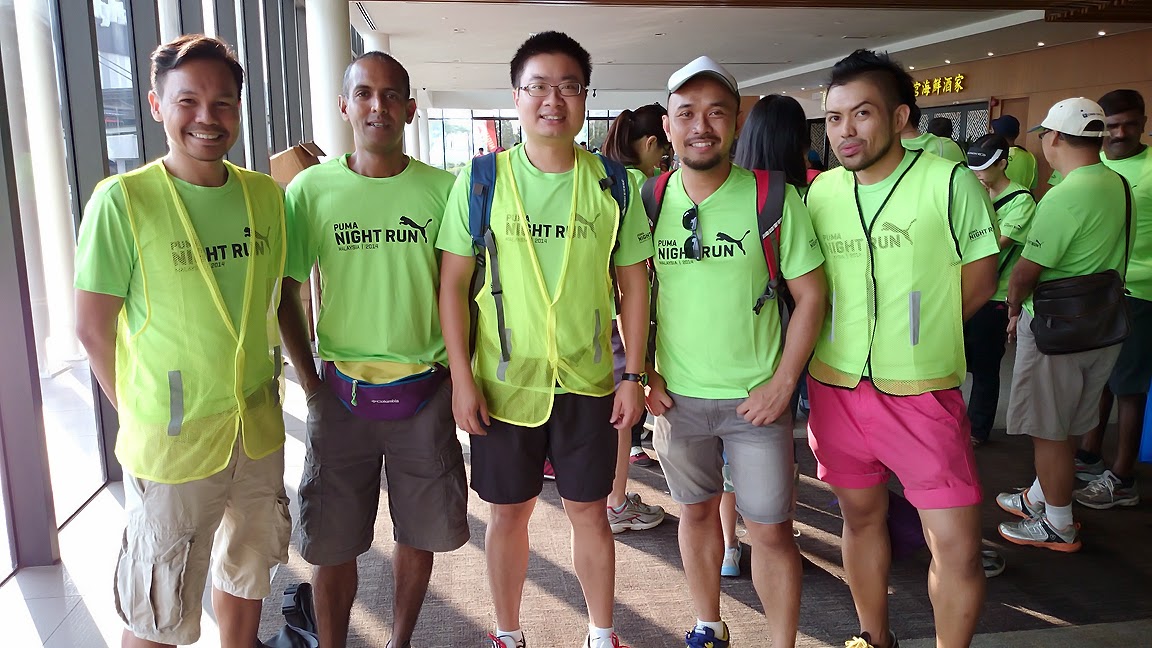 After watching the first three male and female runners come in, I headed back to my duty station cos I had a feeling everyone was going to be asking for drinks which was located way back the at the race village which I thought was slightly odd. I parked myself at the entrance to the village and true enough, lots of dazed runners were asking me where the drink station was located. I really earned my volunteer fees here directing everyone to the proper refreshment tent. 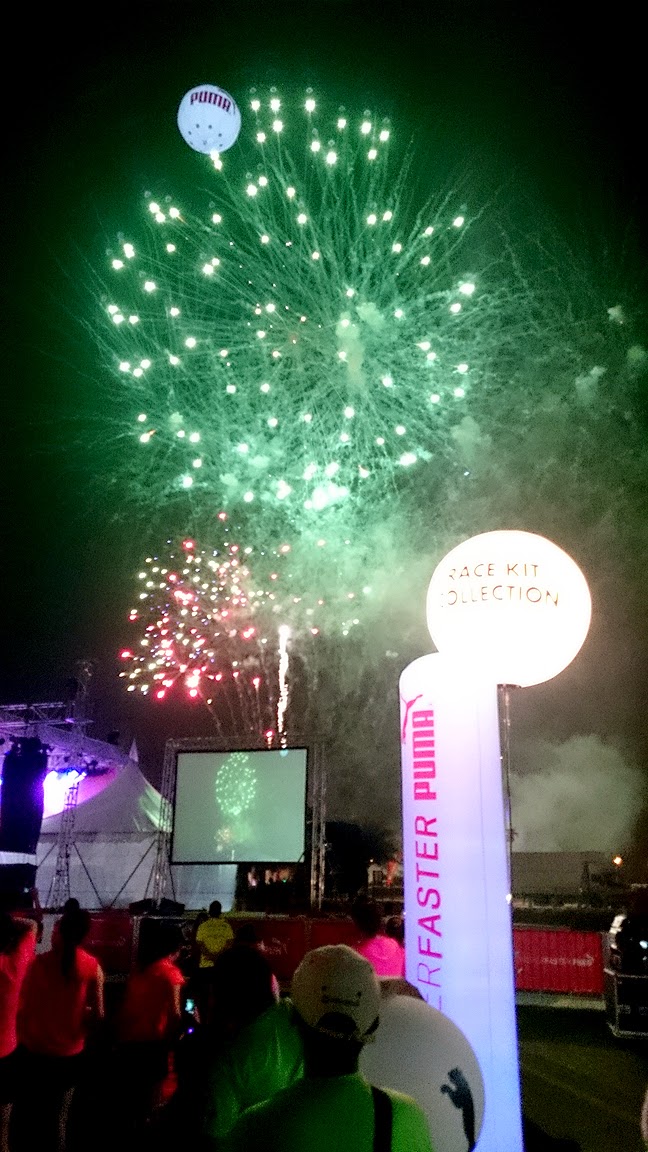 Now, the show wasn't over yet. Like I said earlier, the event was well planned. The moment the place started filling up with runners again, the entertainment resumed. Live bands started belting out catchy tunes that had even me moving along to the beat. Phat Fabes was still working his magic keeping everyone entertained. It was a party like atmosphere once again with the shoppers and participants soaking up the music. 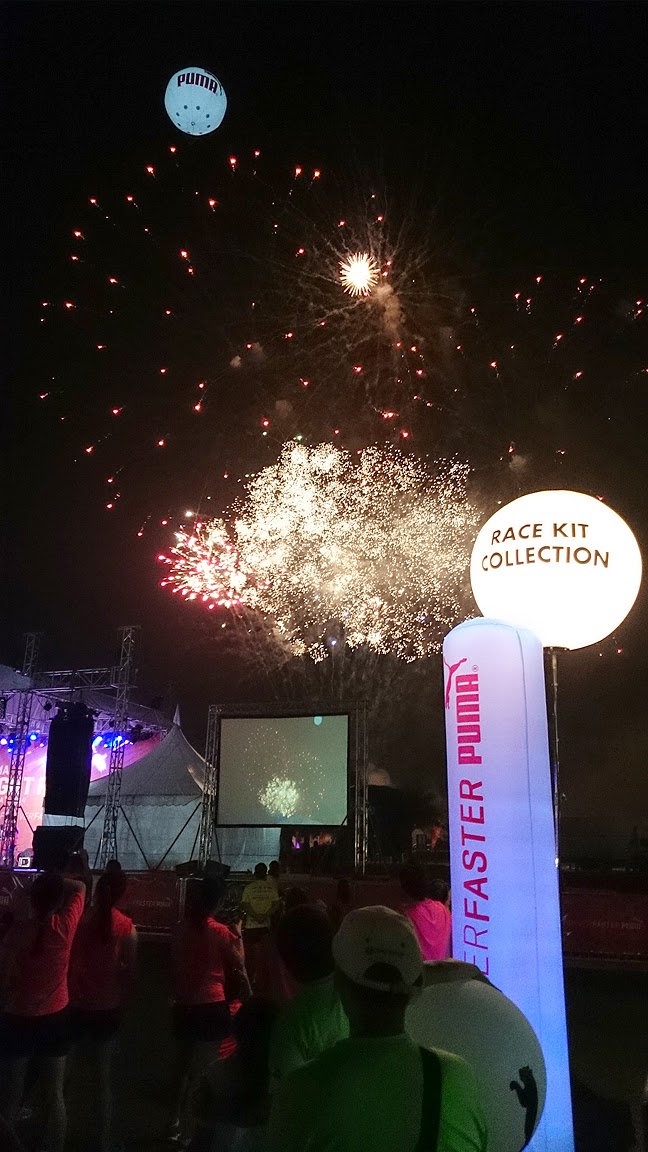 Finally the last of the runners came in and the volunteers all adjourned to the secretariat to wait for the race to officially end. Just before the official end, we were all entertained to a stunning fireworks show, which had me mesmerized. A fitting end to a well run event! After getting paid for our 6 hours work, we finally headed home. My feet were killing me, what with not sitting down for close to 6 hours. I was totally exhausted but happy.

Overall, a good job by the Puma Night Run 2014 organizers for a race well done. Intentional or not, you gave all those present an engaging time. I do believe those who ran the race were more than satisfied with the race experience and things like these do make a lot of difference in brand loyalty if you ask me. I for one, even just a lowly volunteer, love your tee (comfort wise) so much that I'll be visiting your stores for some retail therapy soon :D

If you keep to the same concept for next year and not let the success of this year get to your heads, I'm betting my one month's wage you'll have another whopping success of a run. As for my balloon man job, I simply loved it and if you do have an info man post in your MPIB run, Wan and Jamie, make sure I get first pickings, after all, I'm experienced now ... hahaha!