Don't let the title fool you. It wasn't the marathon for me this year, just the half, which in hindsight was one of the best run decisions I made in ages.

The entire event was under threat of a bad haze enveloping parts of the country. The situation was so bad that I was contemplating to skip the event but decided to play by ear and wait till race day to weigh my options. I didn't want to miss this run not because I was intending to try for a PR or anything but simply because me and the entire gang were running our respective races in support of a very good friend. 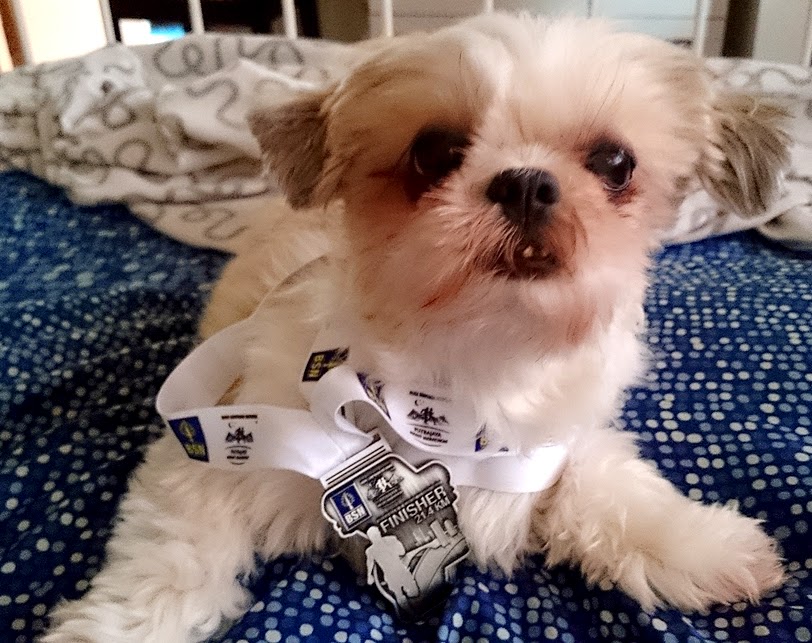 If fact, this would be my longest distanced run in nearly two months since recovering from my knee injury. A conservative pace was in order. This marks only my second time running the half in the Putrajaya Night Marathon, with the previous two installments being the full marathon. I simply wasn't interested in reliving the pain of running a night marathon in the humidity of Putrajaya. It was a wise decision.

Thankfully, the haze let up a little on race day and the event was a go, not that the organizers actually had any intention of calling it off that late in the game anyway. Too much was already spent for it to be called off. The wife (who was also running the half) and me made our way early to the race location, bumped into Arman and Suzie before meeting up with Jamie.

After chit-chatting and warming up, we made our way to watch the start of the full marathon category. Back in 2011, I was running the Putrajaya Half marathon for the very first time and was envious of the Marathoners and vowed to be in the start pen with them one day. This year though I was smiling from ear to ear that I was not in the start pen with them. Jamie echoed my thoughts by stating that we made the right decision by signing up for the half instead of the full.

Soon enough it was our turn for flag off amidst a colorful display of fireworks. It was a new route for all the categories this year. And having run the route before I kinda knew what to expect. To say it was a tough route is an understatement. Right from the start you're already negotiating the rolling highway. Jamie already bolted off with a strategy of his own and I wasn't about to latch on to him, not with the pace he was going. I was still cautious about my leg and eased back into something that better suited my current level of fitness.

The first 12k was not too bad. I surprised myself that I could get into a 5:20-5:40 pace through that rolling highway stretch. The entire stretch though, even with a huge TV screen at the 9K mark (I think) was absolutely boring. Safe for the volunteers at the drink station, you were on your own with the darkness of the night. Mind numbing, I tell you.

By the time I reached the cemetery area, my knee started feeling wonky. It wasn't such a big deal, just a twitch on and off but I wasn't going to risk a recurrence of the injury so I dialed in the pace considerably. Which actually was a good thing cos that was when we reached the PICC incline. I made a decision to walk this stretch which even though I've run it before, felt like forever.

At this point I remembered that I forgot to take my one and only gel and quickly pulled it out and swallowed it down and in my haste I failed to make sure there was a water station nearby. You know la how these gels are when you don't really have water to wash it down. With a sticky taste in my mouth, I continued, hoping the gel would kick it but realistically knowing that it wouldn't really happen, not with one gel at that late stage of the game.

With about 7k or so to go, it was slow going. Even with the dialed in pace, I was struggling to reach the finish. The lack of proper and consistent training was clearly evident. Slowly and steadily I trudged on and finally after 22.3km and 2:15 later I crossed the finish line, not my best time but happy nonetheless to complete my longest run to date and remain injury free. I have a chance at redemption next week though cos the CAPAM International run plies the same route or so I'm told.

As with most of the Twenty First Century organized events, you get the volunteers personally putting the medal around your neck. I thanked them, quickly grabbed my finisher tee, headed to the car to get a quick change of tee and headed up to meet with Jamie to help him distribute some race flyers. After practically bugging everyone to take a leaflet, I ran back to the 20km mark to wait for the wife and pace her back the final 2km plus to the finish.

She did well considering getting cramps and all and I accompanied her back to the finish. Technically this was the first time I ran with her during a race :D She was happy with her performance and said she PR'ed the cemetery stretch ... LOL! Good job, hon.

And a big congrats also goes to my GC buddies who ran the SCKLM the next day, who did great in their marathon with a few getting some exceptional PR's and some on their virgin marathon attempts. Great job guys. 'Iron man' will be proud of all of you! As for me, it's time to work harder to keep up with these bunch of speedsters!