I've been on the lookout for a 10k race for quite a while but the thought of having to drive to some obscure location in the city or Putrajaya always dissuaded me from signing up for one. It's just not worth having to get up so early and drive so far just for a short distanced race.

The MRCA Charity Run 2014 being held at the One City Mall, just a stone's throw away from my house seemed like just the thing. When I was offered a complimentary entry, how could I refuse :D A nice small manageable race, away from the usual race routes was something that attracted me to it. 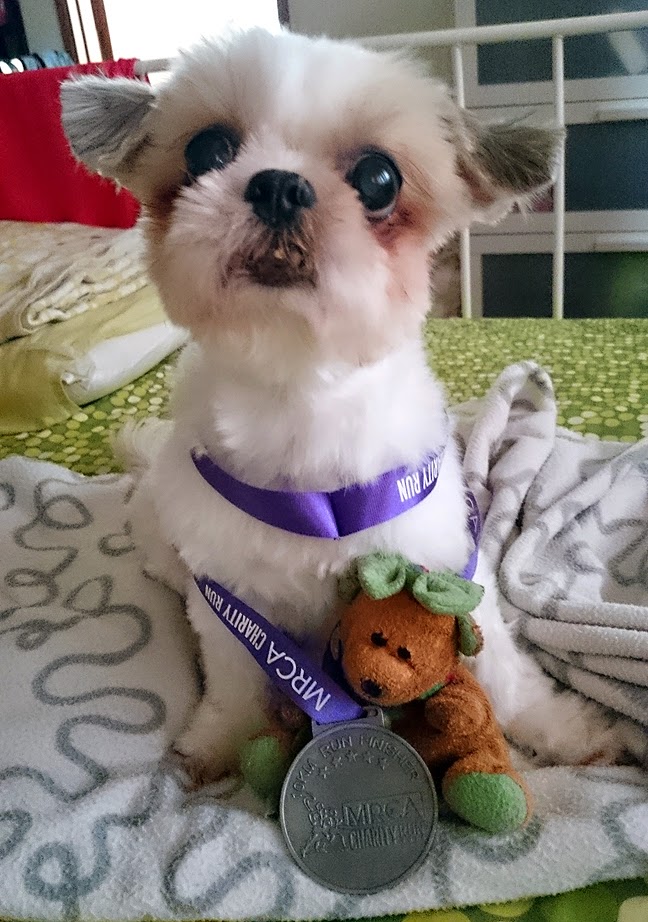 The race kit collection was held 3 days prior to the race at the One City Mall and went without a hitch. Professional and well managed and I was in and out in a matter of 3 minutes! Then again, I wasn't all that surprised seeing as how the organizers were pretty experienced in handling races. It bode a good indication of how the actual race day would pan out.

I was at the race site an hour before race start. With the nice manageable number of participants and the ample parking that was on hand at the One City Mall, I wasn't too worried about having to rush there. It was perfect race conditions with the cool weather, seeing as how it rained consistently the night before.

This race was one race in a long time where I was on my own. The wife decided to sleep in cos of the cool weather, I don't blame her, I would have done the same thing. Jamie, who signed up for this race also couldn't make it as he had another 'race' of his own :D My other usual running buddies were running another race being held on the same morning.

The first sounds to greet me was the chirpy voice of the MC, Julie on stage 'threatening' the participants to behave and follow the rules or she'll be whipping out her rotan ... hahaha! I checked out the freebies on offer and found a nice obscure place to wait out race start. Caught up with Evelyn, the only other person I knew there and we chatted and waited out for race start. Then it was show time.

I wasn't at all familiar with the route but this time I actually studied the route map and had an inkling of where and when I would have to u-turn, etc. Not that I would get lost with the crowd but better safe than sorry. The start as with all short distanced races like these was crowded with all the participants sprinting off. Even though this was a charity run, I had some personal goals so I'm really sorry if I elbowed quite a few of you while zig-zagging to get in front. 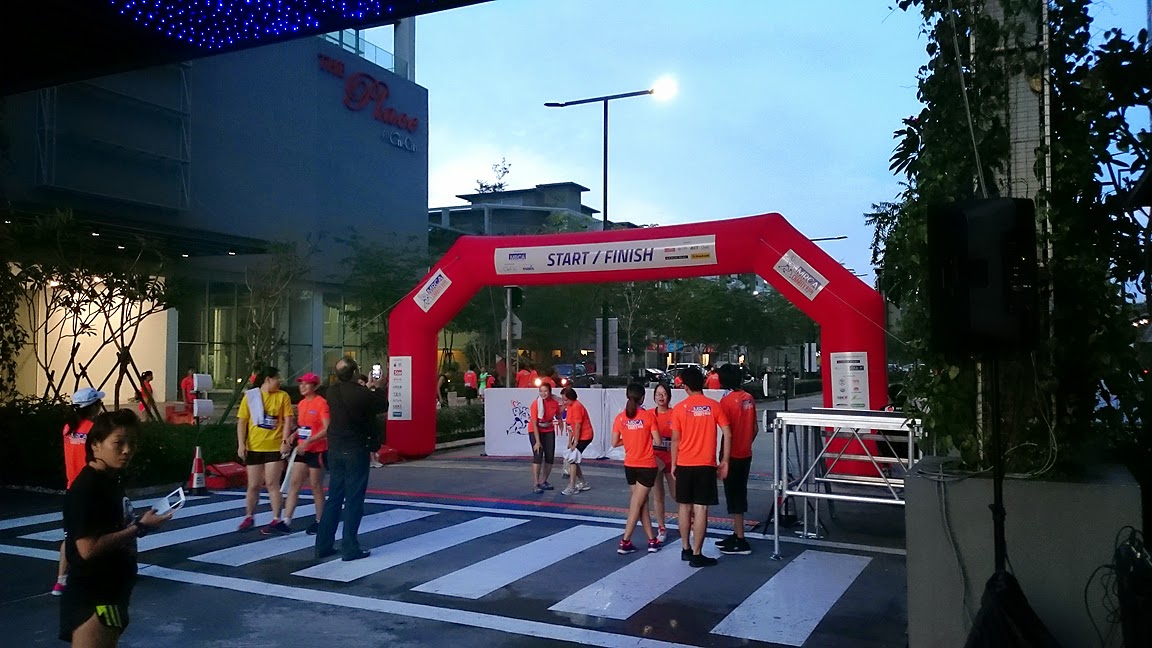 This wasn't my usual slower race starts. It was pedal to the metal from the get go. The weather was cool, the sun was hiding and it was perfect conditions to get into a higher gear. The first 3k was pretty flat and then a very slight incline emerged. Soon the first water station emerged just before the first u-turn at the 4km mark. Stopped to take a quick sip and I was off again. The elites were already well ahead of the u-turn at this point.

I kicked up the pace again and by the time we hit the second u-turn at the 5k or so mark, I suspected the route would be slightly under distanced. Grabbed another drink at the 6k station and headed off. Just at the 7k mark, I saw the hoards of 5k runners making their u-turn and let out a sigh of exasperation about having to run through them. It was going to compromise some speed. But I was ecstatic when I saw the marshals diverting the 10k runners towards the right side of the road bypassing the human traffic at the u-turn. Good on them! 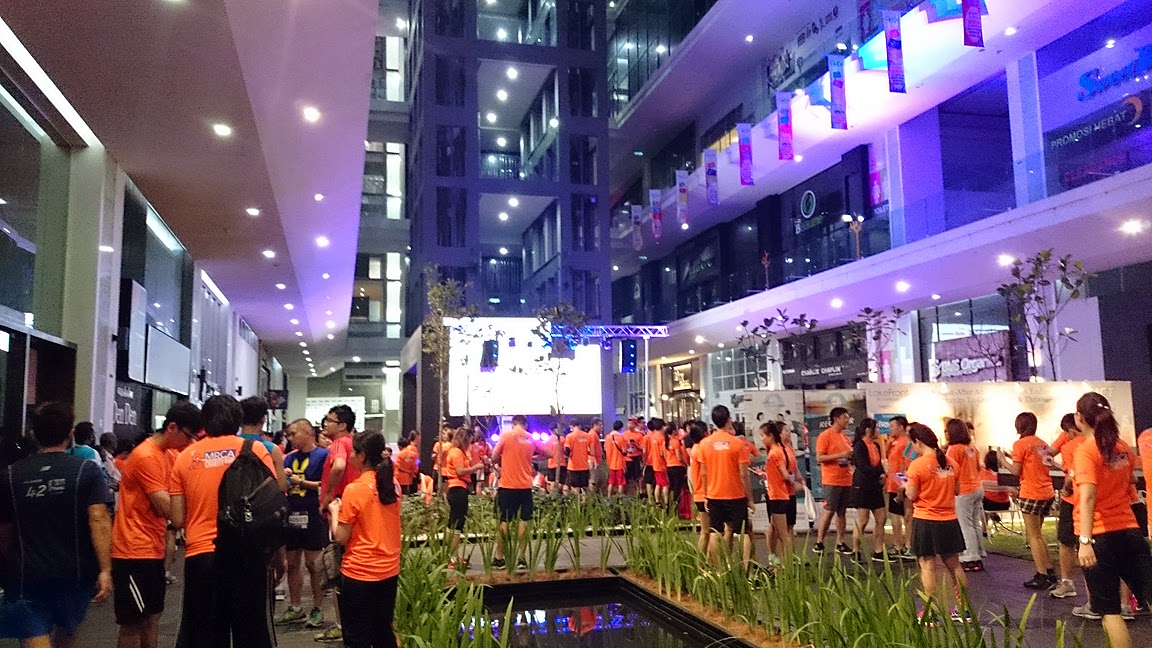 It was short lived though cos I still had to merge with the 5k runners. Taking it in stride, I switched to running as near to the traffic cones as I could to keep in a straight line without having to evade anyone. Just as the Garmin beeped for the 8k split, I knew it was an under-distanced race and I crossed the finish in 46 minutes for a distance of 9.3k. I was on course for my 10k PR but was denied by the shorter route, next time, I guess.

Called the wife the moment I finished to relay my status and then picked up my much needed free water, goodie voucher and medal. This was where I met only the third person I knew here, Puvan, who came in in a blazing time for his PR :D Caught up with Evelyn again, and we all headed to grab the free coffee and other goodies on offer and talk shop about the race.

The race was very well organized. I didn't see or hear about any hitches and I had a good time. What I liked was the amount of goodies on hand for the runners after the race, food and beverage wise. There were a lot more activities going on till late in the day but I didn't stay for it. I said my goodbyes and headed for home.

Before I end, I must say that my choice of race shoe, the Skechers GOrun 4 was simply amazing. It was like an extension of my feet that I hardly felt and was simply a fast shoe to run in. I foresee some good times in them. Overall, I had a good time. Kudos to the organizers and a big thank you to the hard working and efficient volunteers! 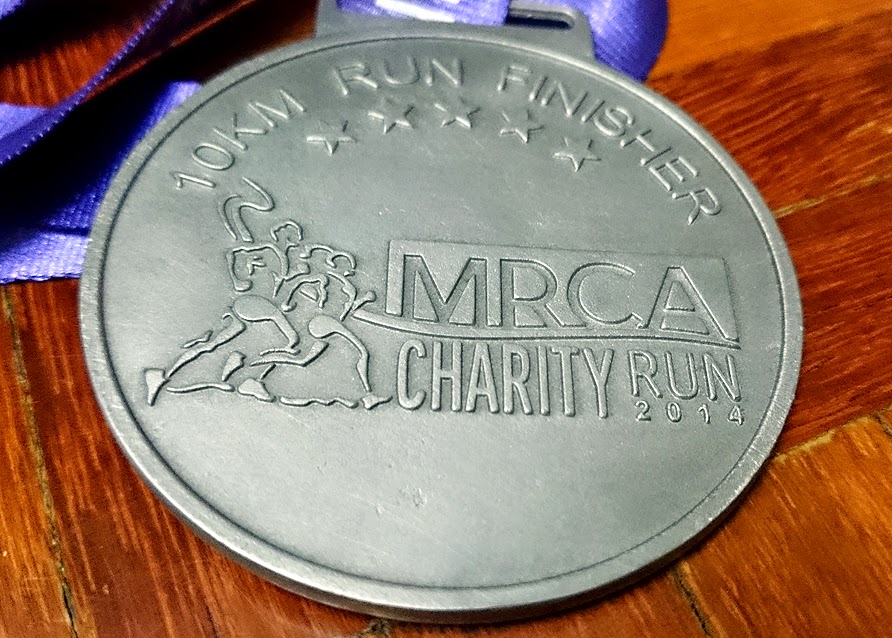