Don't let the title mislead you. Although officially called the Putrajaya 100 miles (P100), my part in the race was confined to the 'easier' 52km category. Even with my life on the line, I wouldn't be signing up for the 100 mile category, not in such an unforgiving place as Putrajaya anyway.

The sanest decision I made months ago prior to this event was downgrading my entry from the 100k category. It was one of the best and wisest decisions I made in a long time. I'm not ready for ultras and 52k sounded like something I could do. 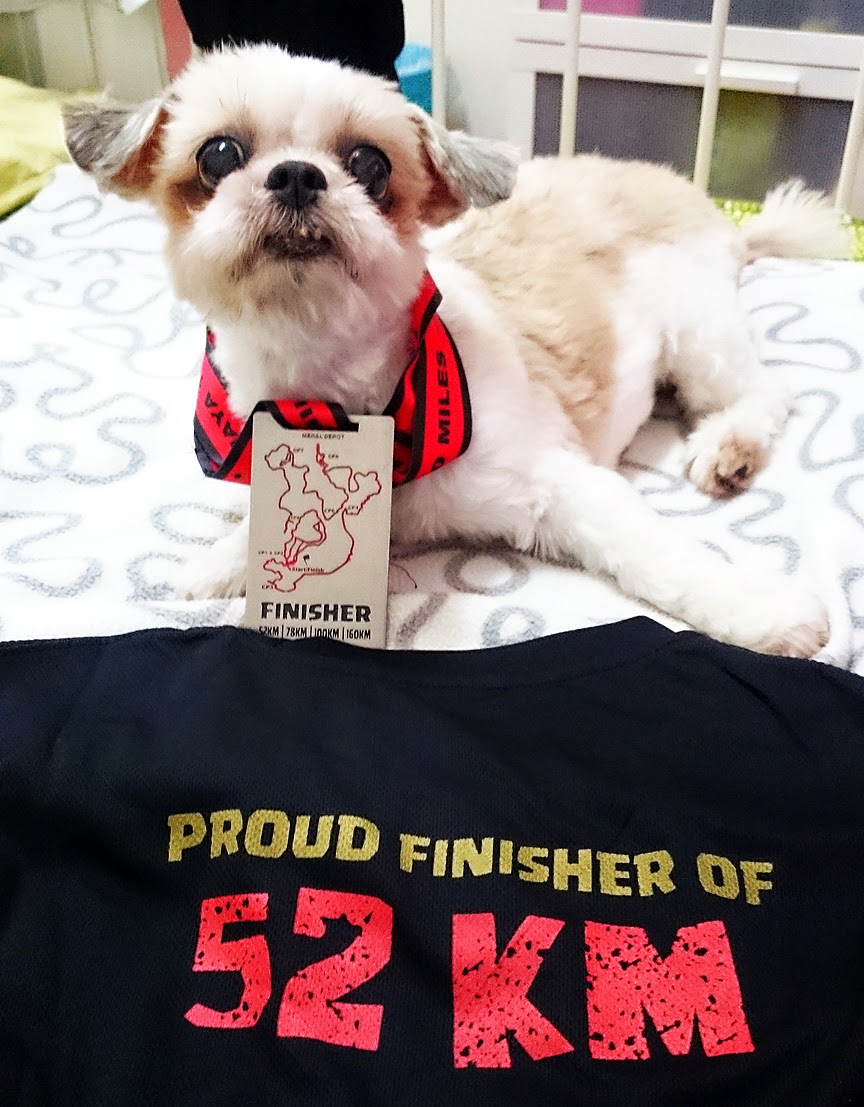 Come race day, I was as prepared as I could be leading up to the P100. I was toying with the idea of either running with full complete ultra gear or just going light. In the end I opted to treat this as my marathon training with an extra 10k thrown in and go light. My gear consisted of just a handheld bottle, a short sleeved top with arm coolers, a loose shorts, a cap and shades. My rubbers for the day were the Skechers Nite Owl GOrun Ride 3. I also opted not to wear any sort of compression for the legs.

The check points weren't too far apart and with proper planning my handheld would see me through just nice for each check point. Even my fueling was kept simple. No gels, just some sliced bakkwa strips (a Chinese salty-sweet dried meat product similar to jerky), cut into small strips. It proved effective during the Penang 84k ultra so it should work here, at least I was hoping it would.

The wife, whom I thought was insane decided to tag along when she could have been sleeping blissfully in bed. Not that I was complaining, I was happy she was there, it would spur me on to run faster so she wouldn't have to wait too long. We got to the race location early to grab the limited parking slots. I was lucky enough to find the last empty spot for the day.

Picked up my bib, mingled around to get my mind off the daunting task ahead. Soon enough, it was show time. The 100 miler participants were flagged off first followed by the 100k, 78k and finally the 52K runners. It was only around 7 plus in the morning but the sun was already out and the skies were clear and blue, indicating we were in for a hot time.

Jamie and me got into an easy stride along with the rest. The plan was to keep the pace easy and last the distance. Barely 3 kilometres into the run, the sun was already beginning to get uncomfortably hot. The first 10k of the run wouldn't be too bad cos the route was shady. We've run this section before so we knew what to expect. Though there was a pedestrian path, we opted to keep to the road as much as possible to spare the legs the hard pounding the pavement was sure to dish out.

Reached the first CP with no issues. Things were looking good, the legs were in great condition and we 'only' had 42k to go. Spent about 5 minutes max before checking out. This was where things got dicey and put a huge damper on our spirits. We reached the stairs of the Gemilang bridge and seeing an arrow that looked like it was pointing up the stairs, we took the stairs to cross over to the other side.

At this point, there was some confusion whether we were heading in the right direction or not. We assumed we were with the markers we saw. We kept on going, still pretty strong, even though the sun was already blazing, towards the Pullman section along the lake, Just as we reached the intersection near Pullman, we saw a 100k runner who told us that we were heading to CP3 and not CP2!

Damn, we would have to double back a long way to cover the CP2 distance. My spirits deflated considerably. Judging by what we knew, it would cost us to be behind by a minimum of 6 kilometers. Jamie and me looked at each other and silently cursed, cos there were a few who knew we were heading the wrong way and chose to be quiet.

Never mind, this is an ultra after all and you roll with the crap it dishes out and move on. Though I must admit, I felt like just giving up. We toyed with the idea of just heading straight to CP2 since we had already covered quite a distance, albeit the wrong way but in the end we decided that it would be wrong and doubled back to the actual route even though it would cost us a lot of time.

This was where my planning all went down the drain. This section was tough, extremely tough. You had to run on rock hard pavement. I dubbed this section the pathway to hell! The sun was out in full force. My water bottle was drained and I had at least 7-8k before I would see CP2 again. Drained and with a parched throat I slowed to a trot. I told Jamie to head off and not wait for me. I had to conserve whatever strength I had till I reached CP2. With no water and the sun beating down on you, I was afraid I'd just faint.

Eventually I made my way into CP2 (which would also double up as CP4 and CP5 later) and like a dry sponge, I took swigs of refreshingly cool coke. Jamie was happily digging into a cup of instant noodles. I wasn't hungry, more thirsty but decided to gobble down some sandwiches to keep my strength up. The wife called to check on me at this point and said she was heading into CP2 and would wait at the opposite end with some drinks. I told Jamie I was heading off to see her and would see him later along the route.

After catching up with the wife and taking another swig of cold 100 plus which she had it was time to carry on with the show. Strangely enough, though I was still deflated from the lost route incident, my legs were fine. The stretch to CP3 was once again road runnable. The earlier pavements, which I would have to go through again later, were really hard on the legs. I was even able to start catching up and overtaking quite a few runners at this point.

The PICC section just before CP3 was a mess with a horrible traffic gridlock of cars due to the Formula E event happening nearby. I had to be a lot more cautious. Some of these car drivers were just plain idiots. Reached CP3, which was the halfway point for the 52k participants. I decided I'd rest here a little longer before making my way back. Topped up my bottle and headed out. It was getting close to noon and the Putrajaya sun was hell bound on trying to fry me silly. I made my one and only pee break behind some bushes and continued my journey towards CP4.

I wasn't looking forward to the path to CP4. I would have to take the pathway to hell again one more time after that and the full force of the sun would be out to get me. Kept to a slow run/walk pace and caught up with a fellow runner around the Marina Putrajaya stretch. Badly in need of some company to keep from hallucinating under the blistering heat, I decided to join him. We chatted and made our way slowly to CP4.

There weren't many runners here and we basically had the place to ourselves. Rested for about 5 minutes, ate some watermelons and sandwiches, filled my bottle again and braced myself to take the path to hell again. It was slow going. The heat was relentless. The pavement was throwing back the searing heat that it felt like I was slowly being roasted over a barbecue pit. The hallucinations set in, I was talking to myself. I even waved and said hello to all the cleaners and random people I met to keep my sanity. The u-turn point was only 5km away but the way I was feeling, it felt like 500km away.

Finally after what seemed like centuries, I completed the path to hell for the final time and made it to CP5. I was ecstatic. The last 10k was a much easier stretch to negotiate. The gods were finally throwing in some help. The skies were darkening and thunder was heard in the distance. Rain was finally on the way. I said my goodbyes for the final time to the volunteers and made my way to the finish.

I was feeling strong again. I told the wife to give me 2 hours max to get back but I managed to cover that stretch in 1 hour 30 minutes or thereabouts cos my Garmin was already dead. Aside from the start, it was the strongest I had felt throughout the race. The cool, rain like weather (though I never got the rain) helped considerably. Climbing down the stairs and seeing the finish about 200 metres away was the sweetest thing I had seen in a long time.

The wife was waiting for me and I was so happy to finish, I even missed her high five ... LOL! The suffering was finally over. I can now go home and sleep. I was proud that I kept on going in such incredibly tough conditions and even with the route setback. The total distance covered is approximately 57km. Is that all you have to throw at me Putrajaya? Well, bring it on, man, bring it on!

The event was organized pretty decently. The crew and volunteers were simply first class. They worked just as hard in trying conditions to make sure the participants had it as easy as possible. Kudos to you guys, especially the crew at the check points, you guys were simply remarkable and I was always looking forward to seeing you every time I checked in. Great job in seeing me through this guys.

And to my insane and crazy wife who waited hours for this crazy fellow to run around the streets of Putrajaya, your undying support is truly appreciated! You're the best! To the rest of you guys who toiled in the sun at even greater distances, you guys are out of this world. Congrats!