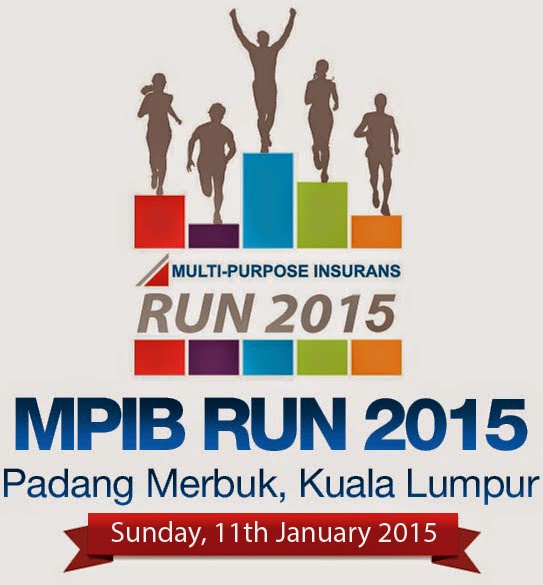 Kuala Lumpur, 3 December 2014 – Multi-Purpose Insurans Bhd (“MPIB”) wishes to inform the postponement of its Race to 11 January 2015 from 4 January 2015 as originally scheduled. However, the venue will remain the same at the Padang Merbuk.

Project Leader Ms. Jayne Liew comments, ‘We would very much like to continue to be known as the 1st Sunday Run of the Year but due to its being held on the same morning as the “1st Sunday Kuala Lumpur Car Free Morning” of the Kuala Lumpur City Hall (“DBKL”), we have been requested to postpone our Race in support of this environmentally inspired campaign.’

MPIB Run shares DBKL’s aspiration in promoting a greener city, reduce global warming and to add to it a car-free morning to promote community bonding. In the process, it will make Kuala Lumpur a better city with space for walking, running, biking and in general more healthy outdoor activities, at least for the 1st Sunday morning of the month.

MPIB extends its sincere apologies for causing any inconvenience and seeks understanding for the postponement. Should any registered Runner decide to opt out due to other commitments on 11 January 2015, arrangements are in place with My Race Online to make the necessary refunds by contacting info@myraceonline.com or calling +603-7491 0505 (Monday to Friday between 10 a.m. and 5 p.m.).

Runners running with coupon codes but unable to make it for the new Race date are advised to contact Natalie at natalie_hau@mpib.com.my or +603-2034 9888 Ext: 7807.

The withdrawal period for both registered runners and runners with coupon codes is 5 working days (between 4 December 2014 and 10 December 2014 by 5 p.m.).

The Race Entry Pack Collection details for city folks will take place as planned on 27 and 28 December 2014. However, the collection for outstation runners will only be held on 10 January 2015 instead of 3 January 2015.

Despite this setback, MPIB looks forward to organising another successful community run for all ages, backgrounds and fitness levels. To be held again at the Padang Merbuk, the 4 categories each for the 12KM and 9KM (a new challenge for those who participated in the 8KM distance of the previous Run). There will also be 2 Fun Run categories of 5KM, while runners’ family members and friends who prefer something “lighter” can opt to join the 3KM walk.

The run’s Organising Committee encourages the public to make regular visits to the MPIB Run official website at http://www.mpibrun.com.my/ or its Facebook page https://www.facebook.com/MPIBRun for the latest updates.

For more information on the MPIB Run 2014, please refer to: http://www.mpibrun.com.my/ and http://www.facebook.com/MPIBRun.

About Multi-Purpose Insurans Bhd
Multi-Purpose Insurans Bhd, a Malaysian general insurance company (“MPIB”), is a wholly-owned subsidiary of Multi-Purpose Capital Holdings Bhd, which in turn is a wholly- owned subsidiary of MPHB Capital Berhad (“MPHB Capital”), a public listed company. MPHB Capital was incorporated in 2012 and listed on the Bursa Malaysia Securities Berhad on 28 June 2013. MPIB obtained its licence from Bank Negara Malaysia under the Insurance Act 1996 and provides innovative general insurance products and services customized to individuals and corporate customers. MPIB has a network of 12 branches strategically located in major towns in East and West Malaysia.

About MPIB Run
Back for the 4th year, the MPIB Run 2015 kicks start the Malaysian running calendar on the 1st Sunday of the year and for 2015, it is scheduled to take place on 4 January 2015. This community run will host 5,000 participants at the Padang Merbuk, Jalan Parlimen.

MPIB is proud to position itself as the pioneer general insurer in organising a community based public run in Malaysia in 2012. The inaugural event successfully gathered 3,750 runners and for the 2nd and 3rd year in 2013 and 2014 respectively, 5,000 runners participated; an increase of 33% from 2012 inaugural run. MPIB hopes this is reflective of a growing community adopting a healthy lifestyle and, hence, the event is themed “Healthy Lifestyle – Work Life Balance”, aiming to suit to the community from all walks of life.

During the weeks leading up to the Run on 4 January 2015, MPIB have scheduled 8 “My First Run Clinics” for new and interested runners taking baby steps to the world of running. The clinic also includes health and fitness related talks to furnish runners with fitness knowledge and to prepare them for the Run on Sunday, 11 January 2015.