This review has been long overdue. The GOmeb Speed 3 review unit came into my possession a little late due to the initial wrong sizing and when I finally got my feet on them, I was already in preps for the Chiang Mai marathon. Though I did get the chance to test them during my taper week but never really had the chance to actually put my thoughts to words. 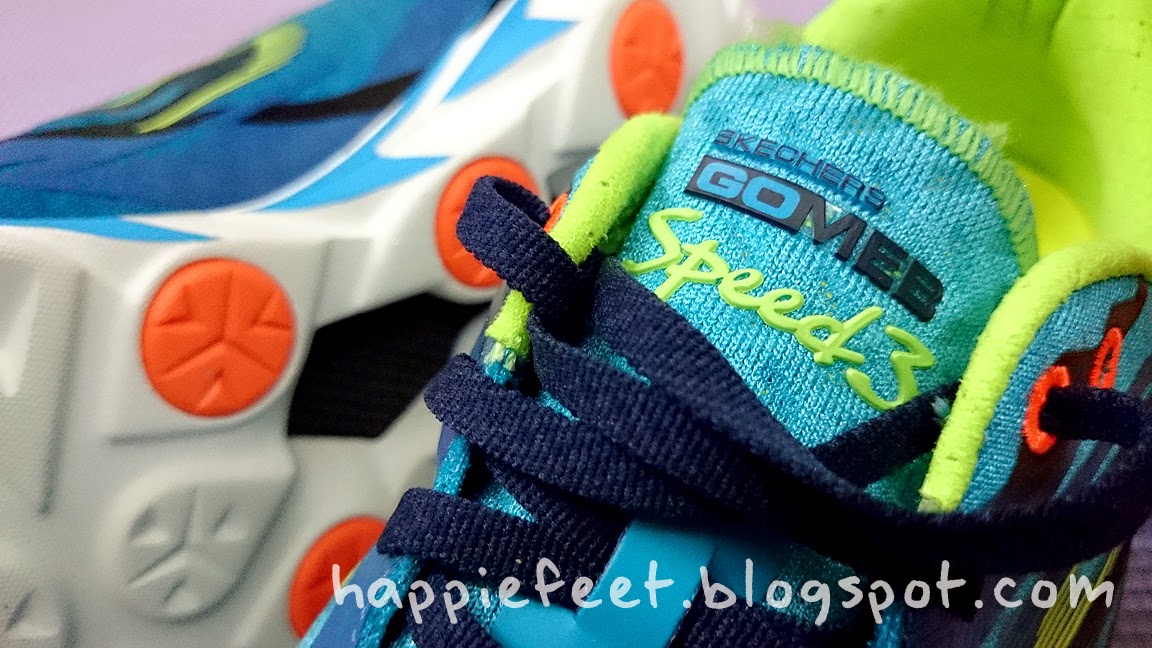 Now with a little time on my hands, here's my take on the Skechers GOmeb Speed 3 (GS3). The GS3 is the very same shoe that my idol, Meb Keflezighi had on when he won the Boston Marathon earlier this year though his was custom made for his feet.

I've run in both the original GOspeed and the GOspeed 2 and the first thing I noticed was that the GS3 has a slightly wider feel that its two predecessors. Both the GS1 and 2 were narrow shoes. This one however feels a lot less restrictive. The GS3 is built on the same basic platform of the GS2. The overall shape remains the same but with a much smaller and newer DuPont Delrin™ stability plate situated in the midsole to enhance midfoot rigidity. The previous versions had a DuPont Hytrel™ Plate. 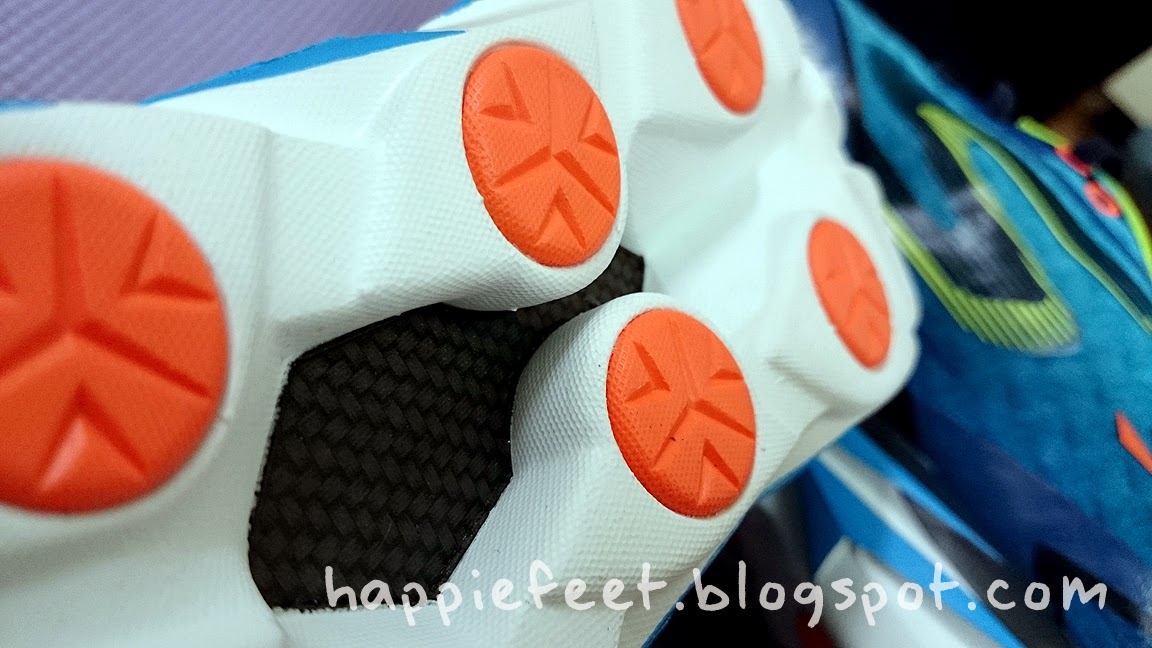 Weighing in at a still lightweight of 6.9 oz for the men's size 9, the GS3, though increased in weight a little still remains a pretty lightweight shoe. With a new refreshed and bolder Skechers logo coupled with its angular styling of soft overlays and subtle textures fused over the upper, the shoe looks downright fast! The GS3 is a minimal racer and its construction is kept simple and lightweight with no added material or weight. 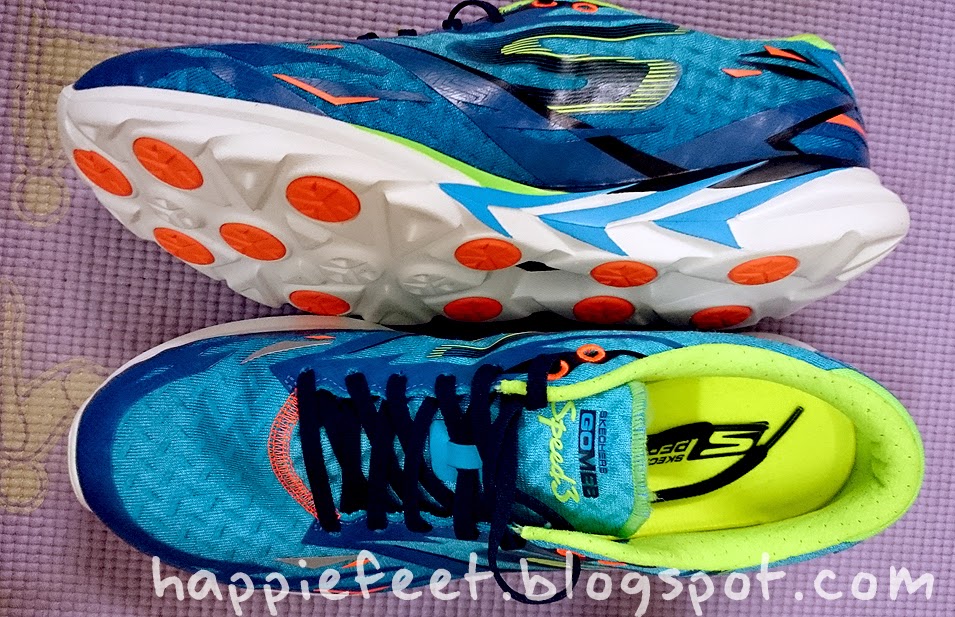 The upper of the Skechers GOmeb Speed 3 is made of a seamless mesh fabric that is flexible and breathable. The pores allow reasonably good air to flow through from the outside for air circulation though I do personally find it being more cooler in the forefoot than the rest of the shoe. The interior of the shoe consists of a seamless micro-fibre lining with hardly any rough seams or stitching that can be felt to maximize comfort. 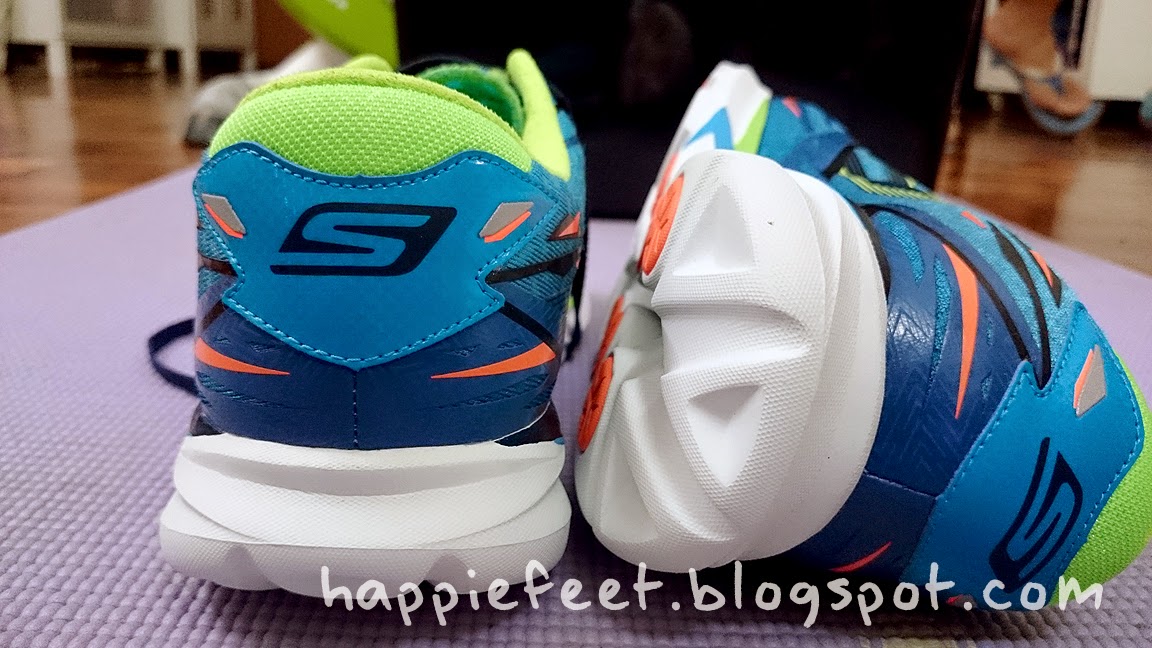 The fit of the upper is typical with most road racing shoes out there. A snug form fitting fit though the forefoot is a little wider this time round. Taking the shoe out for a spin on the road gives you superb forefoot lock-down, which will work nicely for those speedwork track sessions. The GS3 feels a lot more snappier with the foot being pinned closer to the midsole, increasing ground contact with an enhanced push off. The GS3 is not a shoe you would consider doing an easy run with. 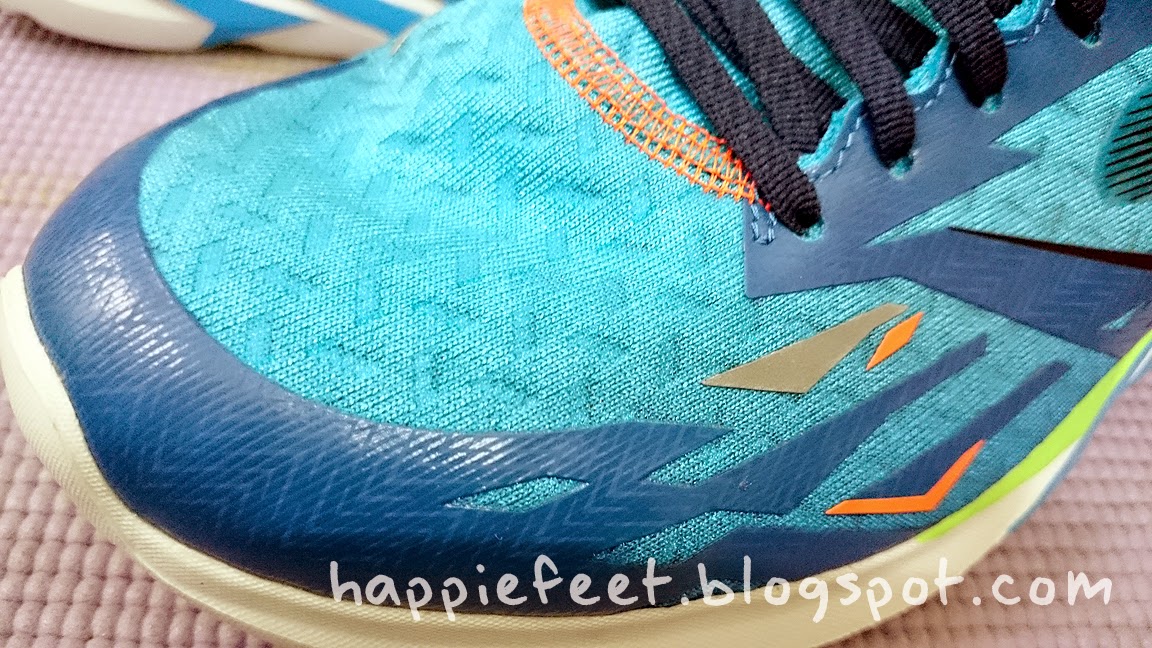 A much more improved tongue consisting of a thin fabric with a layer of thin foam over a smooth lining and closed using flat lock stitching gives the tongue a slight elastic feel that covers the foot without any bunching up or folds. In all my runs in the shoe, the tongue stayed in place just nicely. The heel has a micro-fibre lining backed with foam and a counter stiffener that gives it shape and rigidity. I found it nice and snug and posed no issues whatsoever as I initially thought it would be a little too stiff. 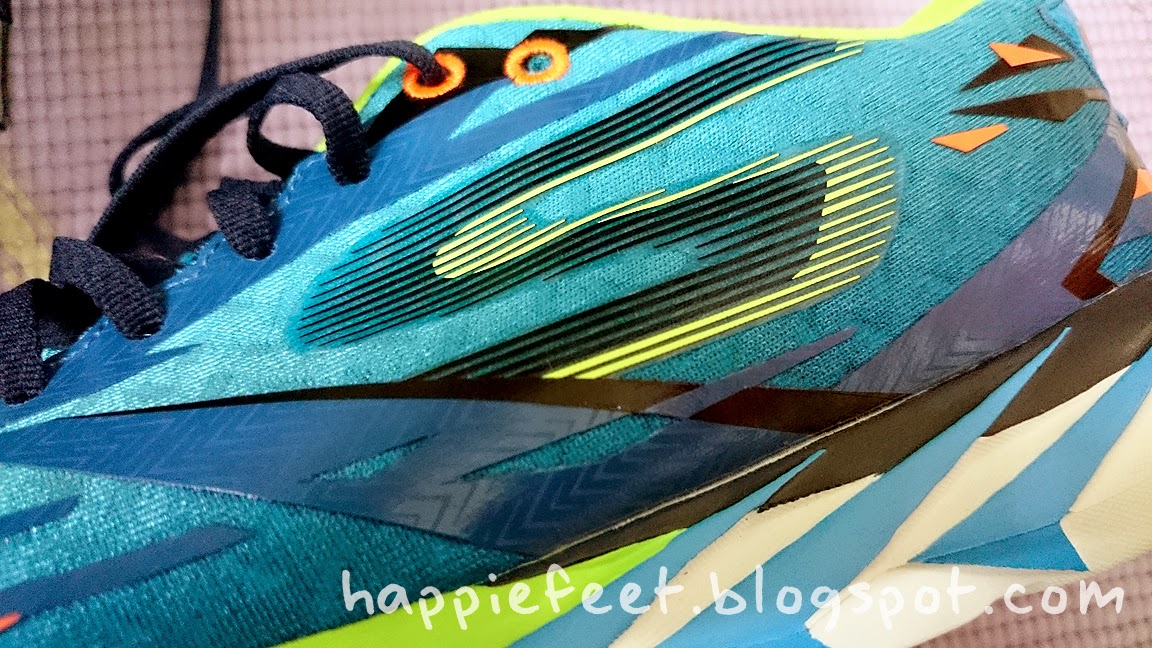 The midsole uses the same Resalyte™ compound found on the previous two versions that helps with impact absorption. It's as low profile as it would get with a stack height of 14mm at the forefoot and 18mm at the heel making it a 4mm drop shoe. The material feels much softer than the previous version yet retains enough firmness for a fast push off. The outsole look remains more or less the same with the same number of circular rubber pods in almost the same position with the exception of two which has now been pushed much closer to the heel. 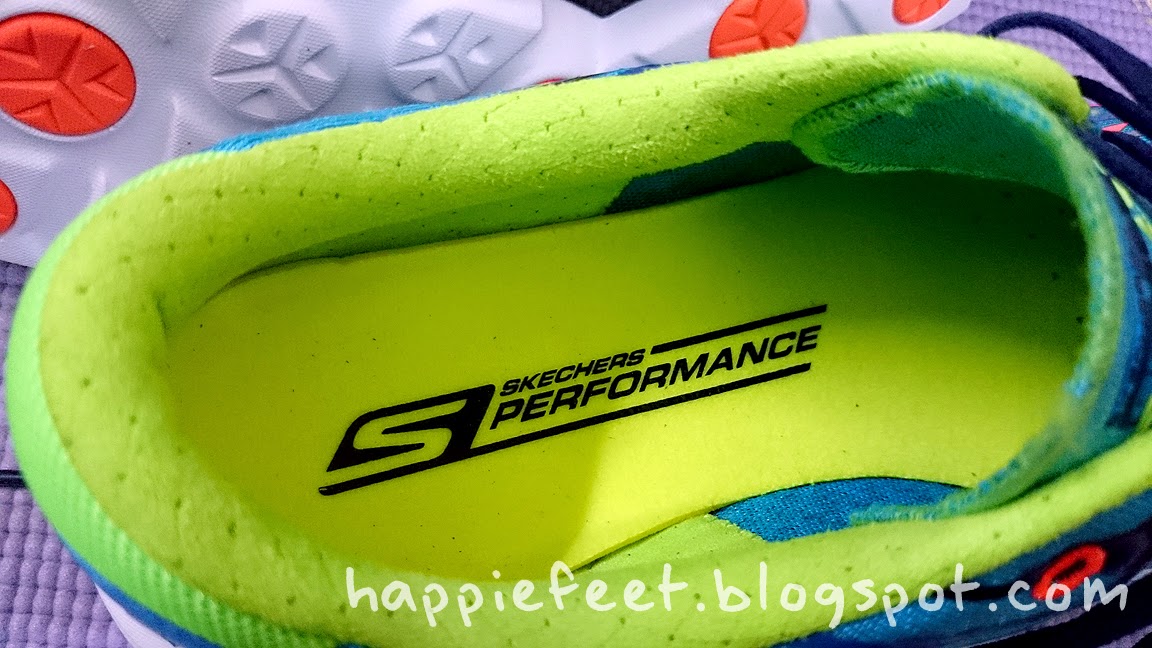 The Skechers GOmeb Speed 3 comes with an extra pair of laces, somewhat more rounded than the default stretchy ribbon laces. I personally think the rounded extra laces will probably come loose much easier than the ribbon ones provided. I'm not sure why Skechers just didn't give the same ribbon type of extra laces instead. 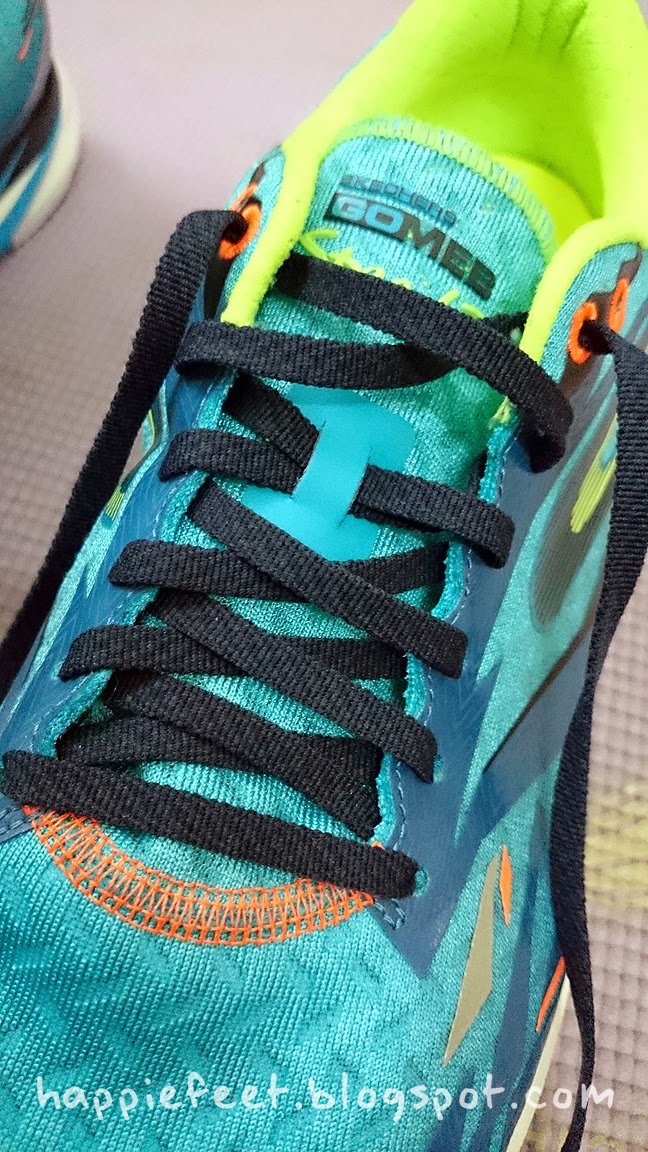 I'm still testing it out further but from what I've experienced so far, the Skechers GOmeb Speed is a super upgrade from the GOmeb Speed 2. I like the wider and roomier feel it gives up front yet is snug enough around the mid section, just the way a minimalist racer should be, in my humble opinion. I like the direction Skechers Performance is taking with the new range of all its GOseries.

The Skechers GOmeb Speed 3 will be seen on the shelves of Skechers Malaysia outlets here in January 2015.