Craze Ultra 100 Miles For The Insane! 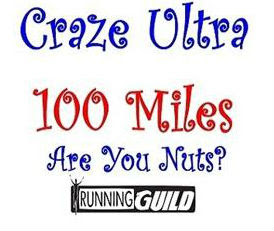 Ray, whom I think is really some superior alien being from some distant planet disguised in a human form is organizing an ultra LSD called the 'Craze Ultra 100 miles' on the 1st of September, starting at 3am and finishing at 3pm at the Palace of Justice towards PICC, the Putrajaya Mosque and then heading back towards the Palace of Justice covering a loop of 11KM. The first batch of runners start at 3.00am and the second starts at 5.30am

You can run as many 11KM loops as you want from 3am to 3pm as long as your legs can take and as long as you're crazy enough to actually do the entire 12 hours ... LOL! There won't be any medals or fancy schmancy finisher tees, goodie bags and the like at the finish but the satisfaction of being labelled as certifiably insane ... hahaha!

But hey, if you decide to give up on your sanity and go, remember that it's a potluck kinda event where you can bring whatever you want to be shared with everyone present cos everyone else will be doing the same thing.

I'm actually seriously contemplating going, starting out with the second batch of not so insane runners at 5.30am and covering maybe 30-40KM and then call it quits. I don't think I have it in me to actually do the entire thing. Besides I still have my sanity intact!

But I guess it'll be fun to actually do an LSD with a host of other runners, especially Ray, that suspiciously alien being who will probably be lapping me every which way. So, if you're interested in some fun running amongst whom I'm sure are some equally fun company, then, as Ray said, be there or be square!

Head over to Ray's blog to get more details on the event.

Update: I have decided to attend and give up on my sanity ... LOL!