Skechers GOrun Ride: Out Of The Box Initial Take

I'm pretty envious of the wife today cos she's got a new pair of Skechers to play around with. She's pretty excited about it too.

I dropped by Skechers this afternoon to pick up our Men's Health race kits and also picked up two pairs of new shoes today. One was a new GOrun for myself to replace my worn out pair and the other was a totally new model for the wife, the Skechers GOrun Ride! 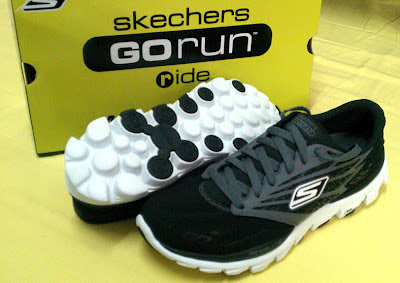 They only had the women's version at the moment so none for me to take home to play with for now. The wife was pretty excited upon hearing the news that she's got the GOrun Ride to test out and couldn't wait to hit the streets unfortunately for her, it was raining all evening over here.

Okay, truthfully, I was as excited as her to put the shoe to the test but will have to wait a little longer for the men's version to arrive. A more detailed review of the shoe will come from her after the Men's Health run this weekend since this will be her race shoe but here's a little initial out of the box take from me.

Visually, you'd be forgiven if you thought this was the GOrun cos it looks almost identical to the GOrun. In fact, aside from a little design variation, I would have mistaken it for a GOrun if I wasn't told it was the GOrun Ride.

The GOrun Ride is essentially the same shoe with more cushioning and is basically an ideal shoe for those seeking a more padded alternative to the GOrun. The GOrun Ride has a 4mm heel to toe drop, feels a little bulkier and also slightly heavier than the GOrun.

I have a confession to make, since the wife and me share more or less the same feet sizing, I put on her pair of GOrun Ride to get a 'feel' for the shoe. The first thing I noticed was the lack of ground feel compared to the GOrun which had a much thinner sole. That trademark GOrun bump was reduced considerably and hardly noticeable at all, which should make the shoe more bearable to walk in. 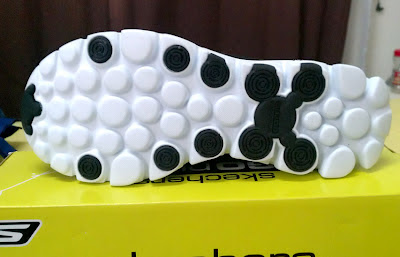 The outsole looks a little different compared to the GOrun and the circular pods are spaced a little more further apart than the GOrun, which according to Skechers solves the problem of pebbles getting stuck in between them. They've added extra padding at the toe section which I thought was a good thing cos looking at my old GOrun on the left, you'd notice the considerable wear on the toe section of the sole.

The wife was pretty happy to get to test the shoe cos as much as she likes the GOrun, she wanted a little more cushioning and this shoe is perfectly right up her alley. I would say the GOrun Ride is perfectly suited as a lightweight trainer in the likes of the Brooks Launch, though it's a heck of a lot more flexible and way lighter than the Launch.

For those of you who like the GOrun but feel that it's too minimalistic for you and need a little more cushioning, my guess (it's still a guess since I haven't run in it yet) would be this is the shoe for you. Light weight and flexible yet amply padded. But a little patience is needed cos the shoe isn't available in Skechers outlets just yet.

For now, I can only envy her when she puts it on tomorrow for a test run on the roads. I'll write a more detailed review on the shoe based on her experience of it after the Men's Health run this weekend.

On behalf of the wife, thank you Skechers Malaysia for the trial pair of the GOrun Ride for her to try out and also for the cool running attire which I'll be sure to try out on race day. For all those running the Men's Health Shape Night Run this weekend, all the best and most importantly, have fun :D

P.S - Ignore the crappy pix since I snapped them using my cell camera with no editing.