The rains came down around 4am this morning which made it perfect running weather for the NTV7 Feel Good Run later in the morning. The wife and me were up by around 5.15am to get ready and then head out to the race location. We always go early to get the best parking spots which will enable us to leave at the end of the race with the least bit of hassle.

It was still drizzling when we got to Bandar Utama. I had a bad case of tummy ache, so I took a quick walk to the Shell Station nearby to take care of it. Upon reaching there, it looked like I wasn't the only one with tummy issues, cos there was a line of other runners waiting their turn.

The race route this year was the reverse of last year with some modifications to it bypassing all the residential homes. The start and finish were separated with the start being in the same place as last year and the finish in the park across Bandar Utama which I thought was a much better idea. No crowding at the various sponsors and goodie bag tents unlike last year. The goodies were also pretty neat, if you're a dog or cat lover that is. Loads of freebies for the furry fellows. 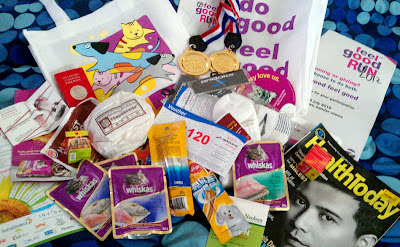 Met up with my good buddy Sean just before the start. Managed to also catch up with Surin. Was so engrossed in idle chat that we only realized the race started when we saw people running way up at the front. The wife was the smart one, she left us to our idle chat and went to the race pen much earlier.

Immediately took off to follow the crowd. Was cursing myself a little cos I wasn't even warmed up and the cold, rainy weather wasn't much help in getting the legs ready. Struggled to get the legs working. Good thing the very crowded roads with all those fun runners was not conducive for running fast, so I used that 3KM stretch as a warm up.

Just as the legs got nice and loose, we came to the 3KM mark. By this time, the runners were already spread out and the running got easier, or so I thought. Just after the 3KM stretch, we were greeted with this crazy mother of a hill, no let me rephrase that, crazy mother of a mountain! Though it was about 400 metres or so, it was 400 metres of hell on earth. It made Ammah hill pale in comparison. But I resolved to keep running up the mountain no matter what.

I was almost out of breath at the peak of it and that water station right at the very top was heaven sent. Grabbed a cup of water and another filled with 100 plus, took two nice swigs and with the way being devoid of the earlier group of runners, it was time to make up for lost time. Good thing it was a downhill stretch of at least 750 metres which made the going nice and fast.

Stepped up that last 3.5K with an average pace of 5:00 till the end, even managing to squeeze out a best pace of 3:38 somewhere in there (probably wind assisted ... LOL!). It wasn't one of my best 7K time but heck, after having to dodge countless other runners, wait patiently for clear roads and with that humongous monster of a hill thrown in, I was happy with the outcome.

Overall, the race was well organized, much better organized than last year if you ask me. The earlier rains kept the temperatures cool and the crowd were having a blast. After collecting my medal, I headed over for free burgers from Burger King but was too lazy to queue for the free San Francisco coffee. Just headed for the goodie bag tent, caught up with my buddy Sean for a bit and we both waited for the wife to finish and then headed for home.

Kudos to NTV7 and Twenty First Century Sports for the organization of the event cos it was exactly what the theme said it would be, a nice 'Feel Good Run'. Judging by the success of the race, there will definitely be more runners signing up next year but remember to bring mountain climbing gear next year to tackle that hill ... hahaha!

Now to get ready for my next race, the Men's Health Shape Night Run next week followed by the BHP Orange run the very next morning!