Today's group run with the GCM Team Malaysia crew concludes week 1 of the advanced Hansons Plan. The going has been surprisingly easier than I thought it would be. I was a little intimidated choosing the advance plan cos it looks a little daunting, but what's life without some challenges thrown in. 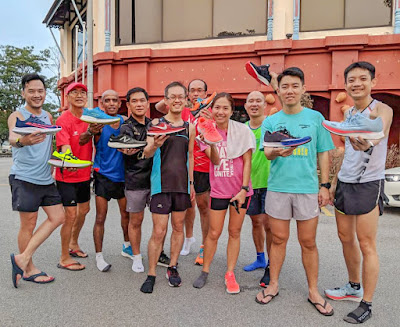 Waking up early to start the plan this week wasn't too much of a bother because I've never really stopped running and have been waking up early consistently every morning during maintenance and base building. In fact I was enthusiastic to start the plan (ask me if I still am enthusiastic in a few week's time and I might reply differently ... hahaha!).

I had a wide pace spectrum for the easy runs and I mostly kept my paces on the slower end of the spectrum which made the runs pretty easy but a little boring. I've ditched running with music for quite a while now and running at a much slower pace than I'm used to can take some doing. But I wasn't about to deviate from my plan one bit.

There were days though when it got mind numbing but there were days when I was joined by a regular runner around my neighbourhood who kept me company with some chit chat for a few kilometers or so, which was much welcomed.

Overall it's been a pretty good week and sticking to the plan was beneficial for my daily recovery, what with having only 1 midweek break. Week 2 looms and the first of the SOS session comes on Tuesday next week in the form or a 12 x 400m speed interval session which in all honestly I'm kinda looking forward to.