I've had the GOrun Ride for close to two weeks now. I was planning to put in a lot more mileage on the shoe before coming out with a review. But then, after using the shoe for the past two weeks and even putting it through a short 12.4K race last week and with the shoe covering a total of 60KM or so, I thought a review would be appropriate. The wife has also been running with the shoe and this review will cover her views and opinions on the shoe as well as mine. I did an initial out of the box take that you can check out here. 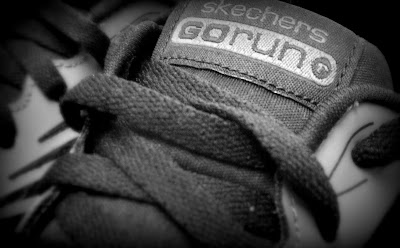 The GOrun Ride is basically a second edition (so to speak) of the original GOrun. In fact, aside from the slight variation in design motifs on the sides of the shoe, you wouldn't even know it was a shoe with entirely different characteristics. It still has the nice soft breathable upper mesh of its predecessor and is just as flexible. The Resalyte outsole albeit with some difference in technology is still there though the GOrun looks slightly sleeker.

The main difference of the GOrun Ride is that it basically has more cushioning than the original GOrun. There are two things that I first noticed immediately about the shoe. The first was the very noticeably less 'bump' in the arch that was very prominent in the original GOrun. The second was the lack of ground feel. I'm so used to the GOrun and it's more minimalist feel that the lack of ground feel was pretty obvious to me. Though it's a little heavier than the GOrun, the weight difference was hardly noticeable.

The extremely durable and harder GOimpulse pods are also basically located in the same locations with the exception of an additional two nearer the front and one at the toe, which I thought was a good idea based on the wear of my older GOrun which didn't have one. The five pods in the centre are linked together and was branded 'Mickey Mouse' by the wife ... LOL!

Since the wife had her shoe two days earlier than me, she gleefully took it for a spin. She loved the cushioning of the shoes and said it felt like walking on marshmallows (her own exact words). She didn't feel the pounding of the road unlike the GOrun. In fact, with the GOrun Ride, she even recorded faster running times and was pretty ecstatic about it. The only thing that spoiled it for her was the blister that cropped up and ruined her run.

She thought it was the insole problem cos I messed with it the day before and didn't really put it back properly which she said made the shoe feel lopsided. But after adjusting the insole and changing her socks to a pair of Injinji's for the next run she still developed blisters on the same spot. Once again, she recorded faster times until the blisters cropped up. To say she was disappointed was putting it mildly. While she loved the shoe and found it perfect for her, she just couldn't take the blistering issues.

My shoe arrived two days later and I took it for a test run the moment I got home. Excited la ... LOL! Upon hitting the roads, the plush, cushioned feel came into play immediately. It was very easy on the feet with the added cushioning. The cushioning for a shoe this light was pretty amazing! Took it slow and easy to really get a feel for the shoe.

I didn't notice or encounter any issues with it and was running comfortably throughout. The plush, cushioned feel was a welcome relief when you get tired and decide to stomp your feet cos it absorbed the impact of 'lazy feet' nicely. Finished the run with legs that were still pretty fresh. I must say that I'm actually loving the shoe!

The only problem I initially had with the shoe was on my first run, it got a little hot on the feet and I don't mean that in the sexy kinda way. I could relatively feel the difference in temperature compared to the GOrun. But I put it down to over eagerness to test the shoe and the fact that I ran in blistering evening weather and with a pair of black socks to boot. Subsequent runs proved to be otherwise and the fact that I ran in basically wet conditions probably helped with any 'heat' issues that I had on that first day.

I found the shoe kept water out pretty well too, in part due to the larger side design motifs, whether by design or by luck, I don't know, since the next couple of runs in the shoe were in wet weather conditions and the insides were hardly wet even though I purposely ran through puddles of water.

Now, the wife still wasn't satisfied. Since we're both more or less the same running shoe size, she decided to try mine and the first thing she said to me was, 'honey, your shoe is nice and wide, mine is a lot more narrow!'. She decided to try running in mine the next day.

She came back from her run smiling ear to ear and with NO blisters. She felt more comfortable running in my shoe which gave her feet more room and wasn't as narrow and tight on her feet. I'm suspecting her version is one size too small for her which makes the shoe seem narrower and tighter on her feet, hence the blisters.

Well, since she likes the shoe so much, I've let her use my pair to run in until I can get a size up for her, but until then I guess I'm going to have to share my GOrun Ride with her since it suits her well.

The GOrun Ride is slated to be out in stores early next month according to Skechers Malaysia, so if you're on a lookout for a good pair of shoes, wait till next month, try the shoe before deciding on anything else. I highly recommend this shoe. Hopefully, the shoe would come with a wider color range.