With Nike being all the rage these days (and with good reason too) but I'm a shoe geek and I simply love getting my hands on any brand out there that catches my fancy. One such shoe was the Skechers GOrun Razor 3 Hyper. It's probably common knowledge among those who know me that I'm a Skechers fan boy so when news of the Razor 3 came online, I was wide eyed.

Now, hoping that Skechers Malaysia will bring this in or that someone will magically say that they have the shoe for sale over here is like hoping for it to snow. So I turned to the online market as usual and managed to snag one from Running Warehouse on a slightly reduced price, I was ecstatic, yeah the postage and tax would make the shoe a little more pricey but heck, it would still be pretty reasonably priced. 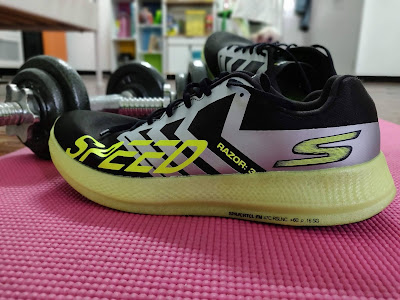 The shoe arrived within a week or so and I couldn't wait to get them on. What really caught my eye about the Skechers GOrun Razor 3 was the overall look of the shoe. It screamed fast, what with the huge "SPEED" emblazoned on either side. I've both the GOrun Ride 7 and the GOrun 6 and in all honesty, they were very subdued visually. I like my shoes loud and the Razor 3 was all that. But then, that's not really what makes a shoe good though looking good does help in some teeny weeny way.

I've read so much about the shoe and its new super springy, ultra lightweight Hyper Burst midsole. That's where Skechers has concocted some magic with the shoe. I'll get into that a little later. I've not had the pleasure of running in its previous versions so I really can't make any comparison with its older siblings. 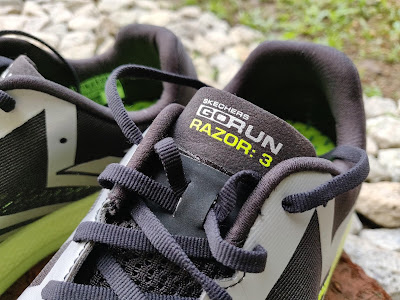 Taking it out of the box, I was in awe at how lightweight it was. My size US8 was in the range of a little over 6oz and looking at the shoe you might not believe the weight. I know I didn't at least until I picked it up. That's when I wondered how would they keep the shoe cushioned enough, what corners did they cut to make it this light? After all, they touted this shoe as being more light weight and more cushioned than the Razor 2. Light weight and cushioning doesn't really go well together.

But Skechers Performance managed to pull it off without sacrificing anything. Like I said earlier, the magic was in the new Hyper Burst midsole technology, a super springy, ultra lightweight and long lasting midsole. The Hyper Burst feels like a spongier BOOST but is a heck of a lot lighter that the BOOST. It's 15% lighter, 30% more durable and more resilient than Ultra Flight, which succeeded FlightGen on current models. 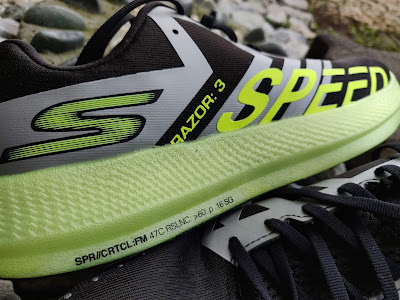 The Skechers GOrun Razor 3 is really light. It's amazing how the new Hyper Burst material has managed to increase the amount of cushioning while decreasing the overall weight of the shoe without compromising anything in the process. I absolutely love the energy return from the midsole. You'll get just the perfect amount of give on your landing with enough rebound to make your stride feel livelier. For a shoe with more than enough cushioning for use daily, the weight is short of insane!

Instead of the knit material found on the previous models, the upper of the Razor 3 consists of a seamless, non stretch light mesh material. The ripstop mesh provides good breathability and basic support for a snug fit, maybe a tad snug. Will come to that in a bit. This shoe screams Speed and is built for the faster paced runs and the very minimal tongue and laces support that statement. The overlays are printed on and the heel collar is lightly padded with a simplistic design that keeps things uncomplicated. 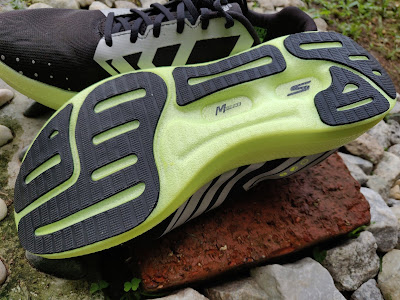 Like I said earlier, the Razor 3 run a little narrow and snug. I'm a US9 for most other brands except Skechers where I have to size down to a US8 for all their models. Strangely though, the US8 for my Razor 3 felt a tad too snug and the first time I ran in them, I felt a hot spot on both my outer small toes. Granted, I was in pretty thick socks but it made the run a little uncomfortable. The second run in them with way thinner socks felt a whole lot better but they somehow still felt a tad too snug though no more hotspots were apparent. This is a little strange and sizing up by half a size would have been perfect.

The outsole, where I've always questioned the durability of all my Skechers Performance shoes sees a lot of rubber added on. While this outsole rubbers doesn't nearly look thick or durable enough but in true fact, they're actually pretty durable. The normal wear I see on all my Skechers shoes are non apparent on the Razor 3 and I'm guessing the Skechers GOrun Razor 3 Hyper will see a lot of miles before any apparent wear is noticeable. 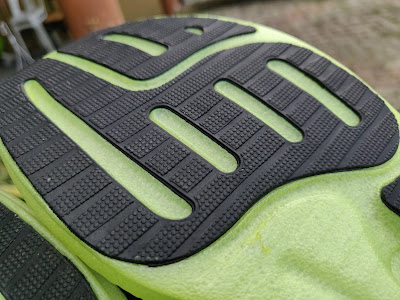 I've run with the Razor 3 in both slower and faster paces and while the shoes works just as well when you're out smelling the roses, it's when you take it up a notch is where the Razor 3 excels. One of the most notable feature of the Skechers GOrun Razor 3 is the midsole consistency, the same fresh springiness is found underfoot, no matter if you're on mile 1 or mile 15.

A good shoe elevates your performance regardless of how fast you run. Much lighter shoes with extremely responsive midsoles will make any stride all that much more efficient and the Razor 3 does just that. The Razor 3 is a 4mm drop shoe is the perfect option for someone who needs a lot of cushioning but likes their shoes light and as speedy as possible. At RM480.00 and with no fancy carbon plates or crazy overlays, this makes the Razor 3 an affordable cushy light weight daily trainer that will shave some seconds off your pace. 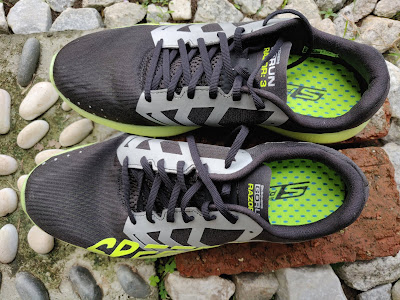