A Camel On My Back

A month or so ago, wifey got herself a Camelbak Fairfax hydration bag from the Marathon shop cos she didn't want to jostle with other runners at the water stations during a race. After she bought her unit, it looked kinda cool and I decided to buy one for myself, I mean how could she have a Camelbak hydration unit without me having one too, right? LOL!

So I went to the Marathon shop the next day and got one for myself too. The thing is, I don't even know why I bought it cos I'm not the kind of person who likes running with things strapped to my body. The only thing I have around my body during races is a Spibelt to fasten my bib number and hold my identification card, some cash and my car keys.

The Camelbak has been unopened and collecting dust in my wardrobe since the day I bought it. Wifey wanted me to pace her a little today during our run session so I decided to take my Camelbak for a test drive. I've run with a Camelbak before, almost 15 years ago, a fanny pack version of it and found it more or less decent to run with. I just didn't like the weight around my hips but it did wonders for me on my long runs. 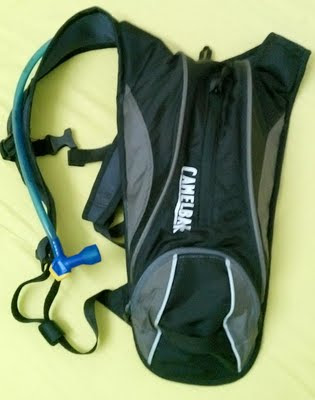 Then the lull in my running came and I can't remember what happened to it. Well, the current Camelbak I have is a backpack version, something I've never run with before and while it did serve its purpose of hydrating me during my run this really hot evening, I found it a little bothersome and was fiddling with it almost all the way through the run. It kept slipping off and the sloshing of water at the back was a distraction. It took me a while of fiddling with it on the run to finally get it nice and snug behind me and slowly drown out the sloshing sound. I was grateful for the ice cool water (it was an insulated unit) but I'm in two minds about using it.

Initially I was intending to use it for my 21K run during the Standard Chartered Marathon cos I didn't want to slow down at the water stations but now I'm not so sure I want to have that distraction on my back. Maybe I need a little time getting used to it, I don't know. I know wifey is quite happy with hers and she's definitely using it during the SCKLM. The chances are I won't be using it, maybe when I do my first ever marathon someday, I'll pack that unit with me :D

But even though it was slightly distracting for me during my run today, I must say I enjoyed having ice cool piped water on demand, especially on a hot evening like today :D