Running With A Cotton Plantation Around Your Feet!

Socks, one of the basic needs for a runner, unless of course you like running without socks, which is something I really cannot do. I've always had problems finding a pair of socks that suited me best without giving me blisters or being totally uncomfortable during a run or a race.

I've tried out countless pairs and brands, from various sizes starting from the really cheap cotton socks to the more branded Nike's and Adidas' but somehow they all don't rise up to my specifications. I still end up with blisters and sore feet at times and it can make a nice long run totally uncomfortable. Running without sock is not an option for me cos I've tried running without socks and it's so not for me.

I currently own a simple Line 7 generic sports sock that somehow was pretty decent to run in and also have a few Nike Dri-Fit cushioned running socks but I ended up more than a few times with blisters on many of my long run sessions. I know for a fact it's not the shoe cos I have three different pairs of shoes and they're all perfectly suited for my feet. I was resigned to the fact that I'll have to face these blisters and sore feet issues for as long as I run.

Wifey also has this same problem with socks but that was until she bought a pair of Thorlo (or sometimes referred to as Thorlos) Experia micro mini crew running socks and said that they were the next best thing to running with a cotton plantation wrapped around your feet. Her blisters and sore feet problems disappeared over night and she said the things felt so light that she could hardly feel them. 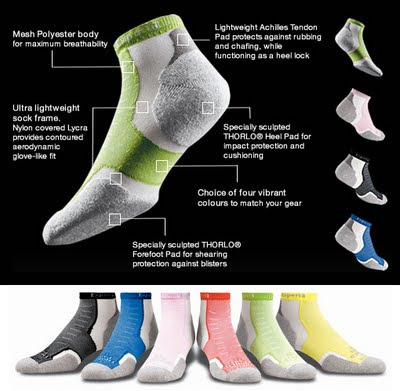 Now, I'm a skeptical fellow. I didn't really think they were all that great and to be honest, I have not heard of Thorlo until then. I let her trial run the socks for a month to see if it indeed was as good as she claimed it to be. After all, at RM69.00 a pair they're not at all cheap and I didn't want to spend any unnecessary cash to try them out and find out they don't help one bit.

But she kept on harping and showing off (LOL!) to me how good her feet feels after a run session with these socks on that I just had to go get one for myself and try them on. Of course, since the socks was so good, she bought another one too. And after using the socks for the recently concluded New Balance Pacesetters 15K run yesterday, I'm a 100% believer in the Thorlos Experia running socks!

The socks was everything she said it was and throughout the run, my feet felt so relaxed that I was smiling all through my run, well except when I reached that darned uphill stretch behind PICC anyway!

It really felt as if I had a whole plantation of cotton wrapped all around my feet and the blisters and sore feet never showed up. It's still too early for me to be really convinced seeing as I've only used it once. I'll keep my final judgement for it reserved until I run long distances in it a few more times but the early results look darned promising.

Though the price of a pair is pretty steep, that isn't the worse thing about it. The numerous 'I told you so' from wifey is so much worse ... hahaha!