The Standard Chartered KL Marathon is finally over for me and I must say that I enjoyed myself thoroughly for the half marathon event which I participated in. I've been looking forward to this race for quite a while. All the training I've put in and all the mileage I've covered throughout the months came to fruition today as I did my personal best 21K race event crossing the finish line in a time of 1:53:00 :D Kudos also goes to wifey for completing her 10K in her personal best time :D That woman is getting faster by the day! 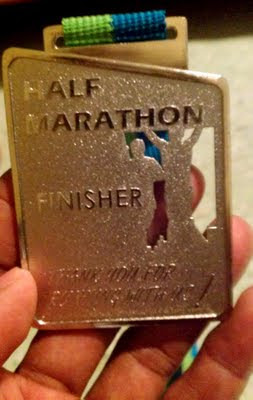 Overall the race was pretty well organized with proper signages and announcements and I don't think anyone has a reason to complain about the race organization. Water and sponging stations were where they were indicated to be and there were enough race marshals to guide the runners to the proper routes and turns. The finisher medals were given out properly after the race without any hassles and everyone seemed to be in high spirits after the race. The volunteers and organizers deserve a big pat on the back (as far as I'm concerned anyway).

Wifey and me checked-in to a hotel near the race venue the night before cos we weren't looking forward to getting up so early just to drive there and then search for a parking and wait hours for race start. Looking back it was the best idea we came up with cos we got to sleep in an extra two hours which was much welcomed :D I guess loads of other runners had the same idea cos the hotel we stayed in was practically crawling with runners too.

On race day we got there just in time for the start of the marathon and then headed off our separate ways cos wifey started her run in a different race location than mine. Poor girl had to wait an hour longer than me for her race start.

The 21k started off exactly on time and as with all races, the start was a crawl with more than 4,800 plus half marathoners starting off. The first 3k for me was more like a brisk jog trying to squeeze my way past all those other runners. The small roadway along the Dayabumi complex and the road leading to the KTM station was pretty tight and it made negotiating past all those other runners a chore. I decided to bide my time and wait till kilometer 3 where the roads opened up a little before increasing my pace.

Once I got to that point, the run was pretty smooth cos the runners started spreading out a little and there was more space to overtake. I increased my pace a little just to make up lost time but overall kept to an even speed since I still had a good ways to go. The route was relatively flat with a few small inclines at certain stretches which made it a pretty fast route.

The legs were holding up so I upped my pace a little more just as I got to the Loke Yew stretch all the way to Cheras. Though it was a flat stretch, I simply hated that section of the race (I have no idea why though) and just wanted to get through it as fast as I could. I was feeling the effects of upping the pace and swallowed my GU energy gel at this point to recover a little. Timed it just right with the advent of a water station just down the road to help clear that sweet tasting sensation from my mouth.

Once I was through the Cochrane stretch and headed back to town, I was feeling much more refreshed and put in a little faster pacing all the way to the finish line. To keep my mind from telling me that I'm actually tired, I kept myself entertained from this stretch onwards by waving at all the spectators and those countless cheerleaders with pompoms, good thing wifey was doing the 10K, otherwise she would have bopped me on the head ... hahaha!

Felt the onset of cramps on the calves at the last kilometer and was worried that I would have to walk to the finish line but I managed to somehow block it out and crossed the finish line with a smile (more like gritting my teeth in pain ... LOL!). Hobbled all the way to the 21K medal collection area and then waited for wifey who came in not long after.

Overall, the race was an enjoyable one, even though I've got blisters on the toes of both my feet and a chaffed nipple that was trailing blood, I have not a single complaint (and god knows I complain a heck of a lot!) about the event. I'll definitely be back for this next year but this time I'm going to try my luck with the marathon!

To everyone who took part, whether you ran, jogged, walked, crawled, bounced or even rolled to the finish line, you're all champions in my book. Congrats to all of you :D