My Forerunner And Me

I've been like a kid just given a new toy since this afternoon. I couldn't wait to get home today cos I got myself a new Garmin Forerunner 610 and was eager to mess around with it. Though I'm going to be eating the grass off my backyard for the rest of the month, I'm totally delighted with my new toy :D 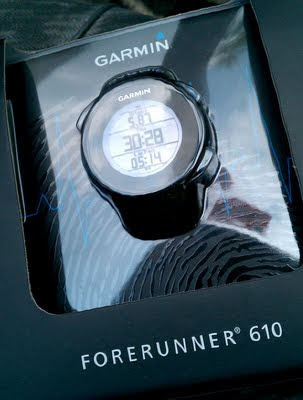 I've been running with a Nike+ Sports band for quite a while and though it served me pretty well, it can dish out some atrocious distance readings when a race route has some serious hills in them. I was actually waiting for the Nike+ GPS sports watch to reach our shores but they're taking a heck of a long time and after some inquiries with Nike Malaysia and finding out that it's tentatively going to be released here somewhere in October, I decided that I can't wait any longer.

I went out and did some research and came across the Forerunner 210 and the 610. I did some serious research for both the models and was set to buy the 210 cos that came complete with the foot pod but wifey thought otherwise and told me why not get the 610 since it was way newer.

So, it was the Forerunner 610 that comes complete with the heart rate monitor that won out. Even then, the bloody entire country was out of stock. A check with Frank Chong and he gave me the Garmin official distributors contact and after making a call to them only to confirm that they really don't have stock and would take two weeks for it to arrive. With no choice, I made a pre-order with them and was pleasantly surprised to receive an email from them today that the stock has arrived, a whole week earlier ... woohoo!

So, after an early morning appointment, I was off to collect my Forerunner 610 and came home a heck of a lot poorer, hence the grass eating for the rest of the month ... LOL!

Well, this is my first Garmin so I don't know much about it except that it was pretty awesome. Almost my entire 10K run today I kept looking at it and messing around with the touch screen every half kilometer or so that I'm surprised I didn't fall into some manhole or get run over by a car ... hahaha ... I'm still tweaking it to make it more attuned to my preference and it should stop being a novelty for me in a week or so.

In the short span of time I used it, it worked pretty well. The unit picked up the satellite on its first try in about 20 seconds (the people at Garmin said that it would take 5 minutes for the first time) so I was good to run almost immediately. I did have some issues about setting up the wireless data transfer which almost had me pulling out what little hair I had left. After some cussing and swearing, I finally got it to 'talk' to each other.

Then I had more problems getting it to upload my run data onto Garmin Connect. Apparently my Firefox is too high a version and it didn't want to install the plugin. A change of browser to Chrome fixed that but I'm a Firefox user so having to use Chrome to upload the data can be pretty annoying but what to do, until they have an upgrade or something, it'll just have to be Chrome when it comes to Garmin.

With all that said and done, I'm pretty happy with it, though it took some getting use to running with the heart rate monitor strapped around my chest. I just might ditch that if it becomes a bother. I'll come back with a little better review of the unit once I put it through its paces a little more. Ok, now let me go back to admiring my new toy ... LOL!