The Sound Of Silence

I took the day off today and decided to go shoe hunting. I know, I know, I already have three pairs of shoes but heck, that's considered a miniscule number compared to the many more pairs some of you have!

It's actually about time I get a new pair cos the three that I have are already showing signs of wear. Between the three of them, they've put in some pretty heavy mileage already and served me well, in fact they're still serving me well but I guess having a fourth shoe can't hurt can it :D

I was also on the lookout for a much lighter pair of shoes. The ones I have are well cushioned to protect my fragile legs but are also a little on the heavy side. They're pretty cool for short distance races or training but they fatigue my legs for the longer distance runs.

The thoughts of getting a minimalist shoes instantly cropped to mind. But I've always been afraid of minimalist shoes simply because they don't provide the added cushioning my feet needs. After some research and a few (more like two ... LOL!) message exchanges with Jamie, which I mentioned interest in the Brooks Green Silence which was a light weight race shoes, he advised me not to rush headlong into getting it and check out the Brooks ST5 racer since I was a Brooks fan.

But sorry Jamie, I went and rushed headlong and got the Green Silence cos it felt so darn good on my feet in those few minutes I tested it out at the shop. Besides I really wanted to get the ST5's but they were out of stock. I honestly don't know how it'll work for me once I take it outside for a real trial run but heck, if I come back and blog about the shoes not being for me, you're totally welcomed to say, 'see, I told you so!' ... LOL! 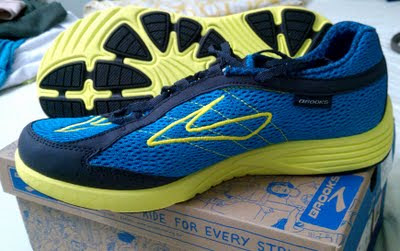 On a more serious note, the shoe felt really nice, for want of a better word, on me. I've never ran in a race flats before so this will be a new experience for me. I've been with the more cushioned trainers all my life and it's like switching from a Station wagon to a two door sports coupe.

I've yet to see how this is going to change my gait or the way I run. I currently run midfoot to toe and this shoe is probably going to make that more pronounced but we'll see after a few runs in it. I haven't decided whether I'll be using it for the BHP Orange run this weekend cos I haven't even broken it in yet. I'll decided on race day whether to use this or my Mizuno Wave Precision 10 which is a much lighter shoe than my favourite Ghost 3.

The Green Silence isn't really a new shoe. It's been out since early this year, if I'm not mistaken. I wanted to wait for the Brooks Pure series to be launched here but it looks like they're only getting it over here in October and that's way to long for me to wait. The Brooks Pure series is Brooks answer to the minimalist craze.

Anyway, even though the shoe is called the Green Silence I bought mine in the cyan and lime green version. Heck, I love lime green so much that everything I own must have a dash of lime green somewhere ... hahaha!

I thought the colour was a little too 'bright' but I didn't really like the black and green model they had there. The shoe is really very light weight compared to all my three current shoes. The shoe has an usual tongue or rather lack of a tongue. The upper half overlaps from one side to the other and wraps the top of your foot like a socks. It's a comfortable fit though. The lacing is also slightly weird by being a little off centre making it a little tricky to lace. It's going to be trial and error until I get the right lacing tightness. 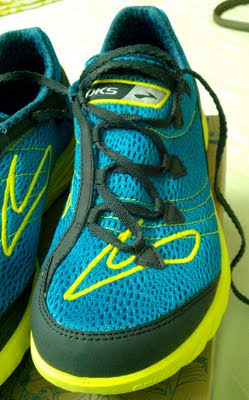 The material looks very breathable though I can't verify that until I take it for a run and see if my feet will heat up. My Ghost 3 can get a little bit discomforting during a long run on a hot day. I'm eager to see if the Green Silence will be a much more cooler (pun intended) shoe.

Another thing about this shoe that I like is that it uses eco-friendly technology and material, hence the words 'green' in its name. It uses something called BioMoGo for the midsole which is the first-ever bio-degrable midsole in running shoes. There's a lot more explanation on it's eco-friendliness which you can check out on the Brooks website. 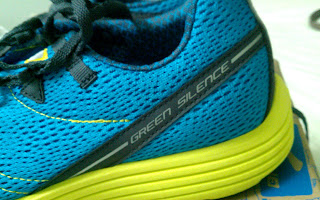 Overall, I am pretty satisfied with it though I'm a little disappointed that the ST5 racer was out of stock. I was keen to try that out and feel the difference. I'm so damn tempted to put on the shoes and take it for a test run right this very minute but I'm a little too tired from all that walking wifey and me did today. Guess the breaking in will have to wait at least till this Sunday cos I'm not running tomorrow ... siggghhh ... 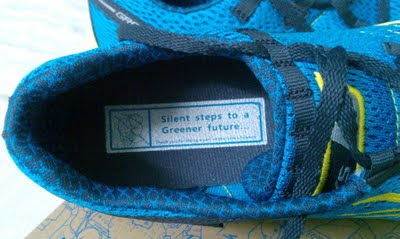