This blog is basically about running and I don't normally bitch about stuff over here. I have my other personal blog for that but there's always the exception to the norm. Besides, this bitch post involves a product I use for running anyway.

I know some people are against listening to music while they run but I do listen to music when I run sometimes. It can sometimes get pretty boring on those long runs, especially on days when you're struggling just to move one foot forward and having some music accompanying you can make all the difference.

Anyways, whether you like listening to music while you run or not, we'll put that debate for another day. I first bought myself a Philips GoGear MP3 player to accompany me on my runs at times and while it was decent, I hated having the wires for the ear phones.

Wifey runs with a Sony Wireless MP3 player and I got myself the same one too after a while and relegated the Philips to gather dust. It was a pretty good decision cos I welcomed not having wires distracting me on my runs and after a few minutes you hardly felt the Sony's in your ears. It was like having music blaring outdoors. 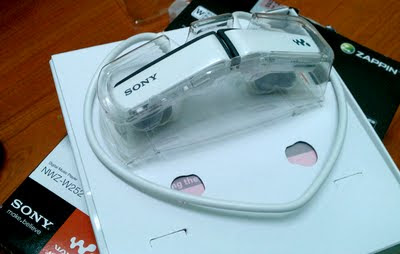 Then Wifey's unit gave out. The start lever decided to stop functioning. Since it was under warranty, we took it back to the shop we got it from. We got her unit at Best Denki in Summit and when we brought it there, they accepted the set without any fuss and sent it back for repairs and in a week or so, they called us to pick up a completely new set.

That was pretty good of Sony for replacing instead of repairing the set. Things were fine for a few months and the set broke down again. Same problem with the start lever. We took it back and they sent it for repairs again and called us in a week or so with another new set. Obviously this problems cannot be repaired.

Never mind, it was still under warranty so no need to pay. Now comes the problem with my unit. I bought my directly from Sony Centre in KLCC. The same problem happened to my unit. Sony, please take note that your lever design is atrocious and something needs to be done about it.

Anyways, since my unit was also still under warranty and there was a Sony Centre in Taipan USJ, near where I live, I thought I'd just send it there. I was shocked when they refused to take my set for repairs saying I had to send it to the main service centre in Sentral, KL and if I wanted them to send it there for repairs they will have to charge me a service fee. I wasn't about to buy that as my unit was still under warranty.

I was fuming! Come on, I bought it at this branch, it's still under warranty and I have the receipt as proof and yet, you refuse to take my unit for repairs? Just what the heck kind of service do you provide?

How come wifey bought her unit from Best Denki, an electrical store and yet they took her unit and sent it for repairs with nary a question asked, twice even and without having to pay a single sen. Yet, Sony Centre which sells the product that is made by them refuses to take it in and ask me to go all the way to the main service centre. I am not amused.

If it wasn't under warranty, I wouldn't make such a fuss and would understandably pay the service charge and whatever repair costs but it's still under warranty la! I'm totally disappointed with Sony Malaysia's customer service standards. Is it so hard to accept the product and send it for repairs? The darn thing wasn't some RM20.00 device, it cost me an arm and two fingers and yet they're just so freaking lazy to entertain me!

I'm not through with Sony though. I just felt the need to bitch here before I write a nice long and nasty letter to Sony Malaysia themselves. One thing I cannot stand these days is bad customer service. If I were to treat all my customers like that, I'd be out of business in no time!