The NTV7 Feel Good Run managed to live up to its feel good slogan cos I think everyone had good run and felt good after that :D I know I did.

Wifey and me got to the race location an hour before race start and managed to find a parking space right opposite the start/finish line just a short two minute walk away. The place was already filled with people lingering around in the brilliant white event tee. We lingered around checking out the messages on everyone's bibs.

During the race kit collection, the number bibs came empty and NTV7 wanted us to write our own message on the bibs. I thought it was a cool idea. It was a fun run and the numbers were really irrelevant so the message on the bib idea was a fun idea. Kudos to whomever thought that up :D I didn't know what to write on mine so I came up with this bit of nonsense ... LOL! 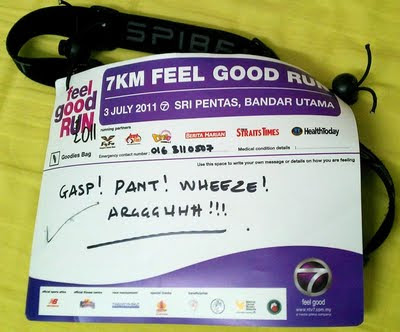 We checked the place out  a little more and then headed to the starting line to wait for the start which was still a ways off. Got in our warm ups and stretches while waiting for the start. The weather was looking to be a beautiful Sunday morning. I was a little worried of my right leg cos I'm actually suffering from a little pain behind my knee. I have no idea what the cause is but it has been bugging me on my runs. After the stretches, the pain subsided and disappeared once the run proper started.

The start was a little packed and it took me quite a while to break away from the crowd. I was even walking at one point just after the start line cos there really wasn't space for proper running. This is something that I hate about race starts but can't be helped cos of the number of participants involved.

Jogged briskly for the first half a kilometer until the One Utama stretch when there were some holes for me to weave through all those enthusiastic runners and managed to build up some speed. I was initially planning to run at a slower pace cos of my leg but the pain had gone by then and since the route was a flat one, I decided to try for a speedier run.

Since we were running through the residential area in Bandar Utama, the crowd of runners were still pretty close together with the roads not being too wide. It was a chore swerving in and out trying to pick up speed and the road finally cleared up for some faster running after the 3.5K mark, which was already the halfway point.

From that point on, I really started to enjoy the race and got into a steady 5 minute or so pace. The one and only water station was at KM4 or so which I decided to give it a miss seeing as how the weather was cool and it was only 3KM to the finish line.

Met up with the 3K runners at the last 700 meters or so and ran along with some costumed runners dressed as various characters. I think I ran along with a 'doctor' and a 'silat master' and crossed the finish with a smile which sums up the fun time I had with the race :D

Picked up my finisher medal and cert and then headed for the drink section and collected my goodie bad, found a nice quiet corner to warm down and wait for wifey who came along not too long later with a smile on her face and in another of her personal best times :D Congrats honey, you're getting better by the day, soon you'll be wanting to run a full marathon ... LOL! 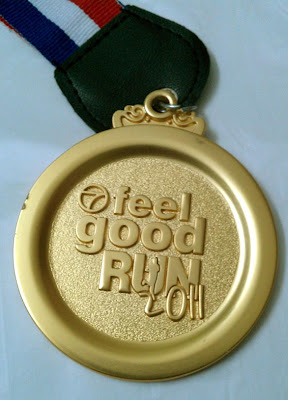 Overall, the race was well organized and kudos go out to the race organizers though I have one rant and a suggestion to share. Rant - If you're going to run a race which advocates healthy living but you insist on lighting up your stupid cancer stick after the race, please do it as far away as possible from me cos I don't want to be inhaling your silly filth from your lungs while I'm trying to cool down and rest.

I just ran a race for gods sake and my lungs are all nice and clean and inhaling your smoke is the last thing I want to do. I'm not saying you can't smoke and kill yourself earlier but please do it somewhere else, not in the middle of everyone who just had a nice run! Be considerate, but then smokers are a selfish bunch and consideration is the last thing on their minds!

My suggestion (to the organizers) - why not give out the goodie bags along with the medals and certs at the finish line instead of making the runners walk all the way to the back and into a small enclosure just to get the goodie bags? I was lucky cos I came in when the place was not that packed and the goodie bag booth was practically deserted but wifey had to skip getting her goodie bag cos it was so choked with runners that she decided it wasn't worth the effort.

Since you guys were already giving out the medals and the certs at the finish line, why not together with the goodie bags and save an entire process of having to set up another booth just to give away the bags? Might even free you guys up with one less logistic to worry about? Consider this next year?

But overall, congrats to the organizers and all the volunteers, you guys did a great job :D And to all who took part, well done :D By the time we left, the rains came but managed to catch Ray running along to his car with his kids in a stroller. Too bad we didn't get to chat, maybe next time Ray :D