First of all, a very big congratulations to wifey for completing the Shape Men's Health 12.3K run which was also her one year anniversary run in one of her personal best times :D And looking through her Nike race data later also showed some pretty fast splits. That girl can run pretty fast la these days :D

It was exactly one year ago when she picked up the running bug and this race was her first so it held special meaning for her. After running the fun run last year, she was eagerly waiting all year for this event to try the 12.3K and I can tell you it's well worth the wait for her cos she was smiling all night long ... LOL!

The race for me was a pretty great race. As with most races, I thoroughly enjoyed myself though there are few peeves which I will list at the end of this post. We got to the race location in Putrajaya a little early. I was anxious to get and ended up leaving the house a wee bit early. We had nearly two hours to spare before race start so we sat in the car for an hour before putting on our race gear and heading to the start line.

After the usual warm up show routines by the organizers, it was time for race start. I managed to meet Neoh before the race start :D It was nice meeting you finally :D Both wifey and me managed to squeeze our way in right to the front to avoid the mad rush of runners when the gun goes off. The gun went off on time and the race for me began.

Before the race I had psyched my mind to do a constant easy pace throughout and then whacked it (as Jamie would say) at the final stretch toward the finish. That went to hell in the first kilometer when my Garmin buzzed me on the 1K mark telling me I was doing a 4.54" lap! Immediately slowed my pace cos I didn't think I would be able to sustain that pace all through the 12.3K run.

I also decided from that point to run by 'feel' and not look at the Garmin 1K auto splits that I programmed the watch to display. I just wanted to enjoy the run and not make it too technical a race for me. The race route was pretty flat with the exception of the area behind PICC that had an incline. I was prepared for it and sprinted my way up the hill and rested on the downhill stretch. The first water station was at this point.

The legs gave a little problem after this section with a tightness behind the left calf which went away after a kilometer or so and from that point on it was blissful running with both the legs and lungs working in perfect unison :D It probably was one of the better and more enjoyable runs I did in quite a while. I wasn't pushing myself like I normally do and even managed to enjoy the night sights of Putrajaya which apart from the lighted bridges were really nothing much to shout about la ... LOL!

To avoid boredom, I decided to play a game with myself and see how many shoes of the other runners that I could recognize which was pretty hopeless cos I couldn't tell one model from the next ... hahaha! But it kept me busy and before I knew it, it was the final two kilometer stretch and I picked up my pace a little towards the finish line.

I crossed the line in 1 hour 5 minutes and 33 seconds in 38th 36th (after viewing the official online race results, I was ecstatic to know I was two places earlier) position for the Men's Junior Veteran category. I was a little surprised when an official stuffed the position number in my hands and told me to go collect my finisher medal. 'Medal? You mean, I got a medal?' was running through my thoughts. The medals with limited to a certain number of finishers so I was ecstatic to even get one :D 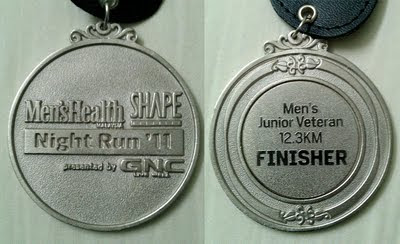 This was the second time I had on my Green Silence and I must say I'm falling in love with the shoe more and more :D I do my training runs in my heavier Ghost 3 or Mizuno Wave and using the Green Silence on race days is like just running in my socks. Yes, the shoe is that light! I only have to watch out when I'm running downhill stretches and not stomp my feet too hard cos I could feel the impact all through my legs. The cushioning of that shoe isn't all that great but it wasn't the shoes fault, it was my own for stomping down the hills. After I corrected that issue, the shoes were simply superb!

As usual, after the race I went to get the goodie bags and drinks and then wait for wifey to come in. Overall, the race was pretty good and I'm looking forward to next years addition already :D

Peeve number one - Please for gods sake, if you want to spit during a run, look and make sure no other runner is near you before you spit. I nearly had three runners spit right into my path and I even told one of them off. There are others running along with you and taking a look on your left (or right) before spitting can't hurt, can it?

Peeve number two - The same as peeve number one. Look before you throw that cup full of water away. There are other people running. I had a nice half full cup of water thrown right at my shoe soaking the heel and made me feel like smacking the idiot on his head. Have some race etiquette la people.

Peeve number three - How can a title sponsor the likes of Gatorade make people buy the drinks with the silliest of excuses like they ran out of sampling products. This really is not the first time you guys sponsored a run, you know. I managed to get my free Gatorade cos I came in early but wifey had to buy hers when she came in. I really don't know which part of the word 'sponsors' they didn't fathom. I made a complaint to the race organizers who were equally pissed at the Gatorade people. I hope they managed to sort the issue out cos there were still loads of thirsty runners coming in.